Embraer tumbles, EADS and Boeing down on weaker US and European markets – Share Wrap

European and US markets were generally weaker yesterday, sending the majority of aviation suppliers tumbling, with Embraer and EADS among the hardest hit. Embraer recorded a 7.9% fall in its share price on Wednesday, continuing the downward trend seen earlier this week.

The Brazilian plane maker, the world’s fourth largest, is suffering particularly from the downturn in business aviation, with recent analyst commentary suggesting it will be well adrift of its target of 240 orders for the year. Embraer’s fall was among the largest on Brazil’s Bovespa Index, which closed down 3.5% yesterday.

Bombardier, Embraer’s major competitor in the regional and business jet markets, announced its 1Q2009 results yesterday, with net profit dropping 31%. The Canadian company had net orders of nine aircraft in the first quarter (70 orders and 61 cancellations), compared to 118 in the same period last year. However, Bombardier Aerospace President & COO, Guy Hachey, stated that interest in the market has picked up “in the last six to seven weeks”.

Meanwhile the world’s two largest civil aerospace concerns, Boeing and EADS (which controls Airbus), saw drops of 1.7% and 4.0%, respectively. Like Embraer, neither Airbus or Boeing are likely to meet their order targets for 2009, and EADS' stock has been cooling on recent commentary from Airbus CEO, Tom Enders, that orders beyond 2009 remain difficult to forecast, with “limited visibility” for both manufacturers and their airline customers.

What had potentially been a bright spot on the horizon for manufacturers, the Paris Air Show, is likely to be a mirage. Neither manufacturer is likely to have their current new aircraft programmes (B787 and A400M) flying at the event, even though a B787 test flight is imminent.

Boeing’s weakness in the commercial sector has been partially compensated by its military businesses, with the approval of the large US defence budget (although it lost a key helicopter contract early this week). The long-term outlook for military markets is not as certain, with suggestions that FY2010 could be a high water mark for US defence spending.

The negative outlook for aircraft ordering has spread to engine makers’ share prices, with MTU Aero Engines down 5.3% and Rolls-Royce down 1.2% yesterday. MTU Aero Engines last month forecast a profitable 2009, but expects revenue growth to be marginal, at around 3%, while EBIT is expected to drop 10-12% and net profit fall to EUR140 million (down 22%). 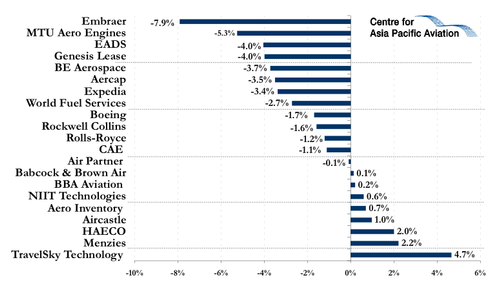