El Al's plans to acquire 15 787s are an important, and overdue, step in its restructuring process. El Al cancelled a previous order for 10, and although a new order faced 2019 delivery slots at the earliest, El Al expects to receive its first 787 in 2017 and the last in 2020. The 787s will be used to replace El Al's six 747-400s and six 767-300ERs, both with an average fleet age of 20 years. The smaller but more numerous 787s replacing the larger 747s could indicate planned flat seat growth depending on the exact configuration.

Re-fleeting will not be a silver bullet to El Al, which after returning to profit in 2013 reported a loss in 2014. El Al improved its 1Q2015 loss while 2Q2015 showed profit growth – with low fuel prices clearly influential. El Al will need to make further adjustments, especially if it looks to grow with the 13 787s it expects to have on option in addition to the 15 firm orders. North America and Europe are El Al's core markets, but Asia is appealing with growing Chinese investment. Hainan Airlines had announced a Tel Aviv service for Sep-2015, but this appears delayed. Israeli reports meanwhile say Cathay Pacific could launch Tel Aviv service in mid-2016 with new A350s.

As low fuel costs came into play in 2015, results improved. El Al reported a 1Q2015 loss of USD16.0 million compared to a loss of USD39.7 million in 1Q2014. 2Q2015, the latest result available, reports a 6% increase in net profit to USD17.3 million, but this was with a 10.7% decrease in revenue. Lower fuel costs are helping El Al, but are helping stronger carriers more significantly. 2015 should be a year when everyone can make money, but some will make more than others.

Fleet regeneration is one area El Al has needed to address. Successful negotiation of the plan will be good, although benefits will not start to flow through until 2017 at the earliest. There are other areas El Al needs to address. As CAPA previously wrote:

El Al's return to a net profit in 2013 should not be allowed to hide a wide range of challenges facing the newly appointed management team of CEO David Maimon and CFO Dganit Palti. The list is long: an ageing fleet, stagnant traffic growth, falling market share, a high cost structure, an open skies agreement between Israel and the EU, growing competition from European LCCs and network carriers such as Turkish Airlines and an under-capitalised balance sheet all need urgent attention.

Although El Al's revenues grew by 4.3% in 2013, they were only at their 2008 level and have reached a plateau after recovering from a slump in 2009. The airline now looks to be on a trend of improving profitability, thanks to cost containment, but its margins are very slim and profits are volatile, as highlighted by the fall in operating margin from +4.4% in 2010 to -2.1% in 2011.

The 767-300ER replacement is perhaps more straightforward. El Al gives the type as having 215-228 seats (an exact breakdown is not provided). This is less than the 242 seats used in Boeing's 787-8 baseline model, but El Al's current configuration is approximately the same as the 219 seats on United's 787-8, to use that comparison again.

Once El Al retires its 747s, the 777-200ER will be largest type in El Al's fleet, assuming the aircraft remain and El Al uses a more typical 787-9 configuration. The 787-9 could be featured on longer-haul and more premium routes, where any loss of seats will be offset by superior operating economics and a likely overall better passenger experience.

Fleet renewal is sorely needed. El Al has been able to mitigate the passenger impact of operating older aircraft with refurbishments, although some may say this programme did not go far enough and was too late. Operationally, however, the aircraft remain inefficient. This is a further challenge to El Al, which faces high security costs, LCCs, competitors with huge home markets (such as Delta and United) and sixth freedom carriers.

Projected delivery dates of 2017-2020 mean the average age will climb further before it falls. But this delivery date range is an improvement, as previously El Al was looking at 2019 as the earliest for initial deliveries. 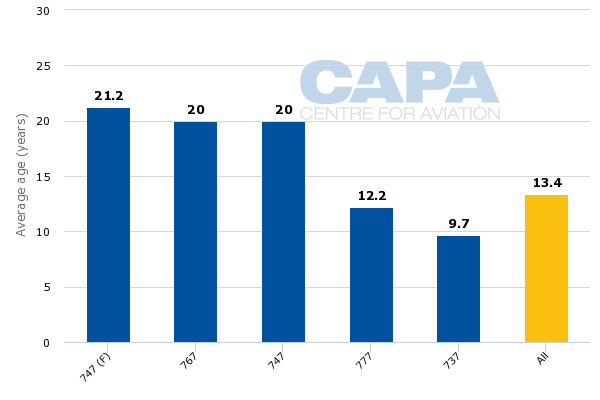 Source: CAPA Fleet Database
Orders include those placed directly by the operator and by lessors assigned to the operator, from 9-Aug-2015 onwards.

Europe and North America are El Al's main markets, accounting for over 90% of all seats

El Al is mostly westwards looking, reflecting the overseas geography of Israelis and trading partners. Western Europe accounts for over half of El Al's seat capacity, with Eastern/Central Europe a further 21%. North America is 17% with Asia about 7%. 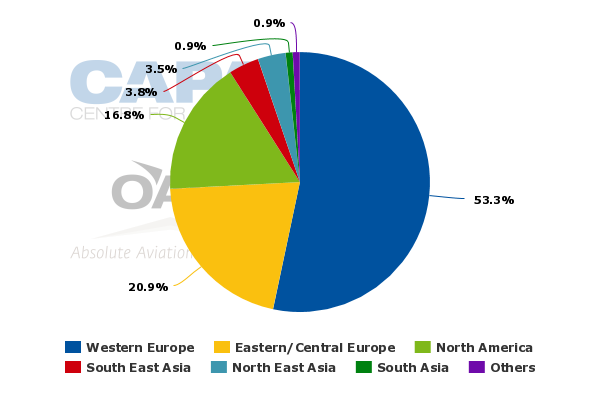 By ASKs, Western Europe and North America are about equal at 38%, followed by Eastern/Central Europe at 10%. 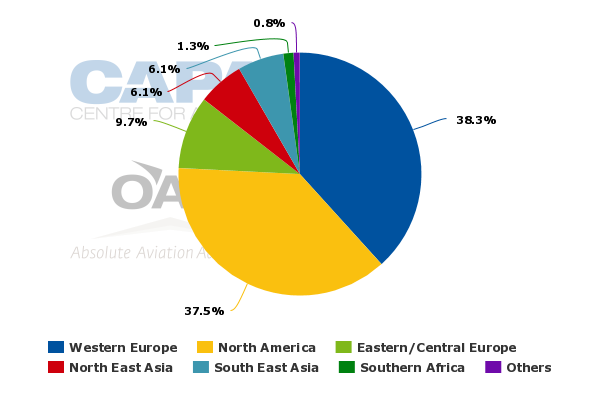 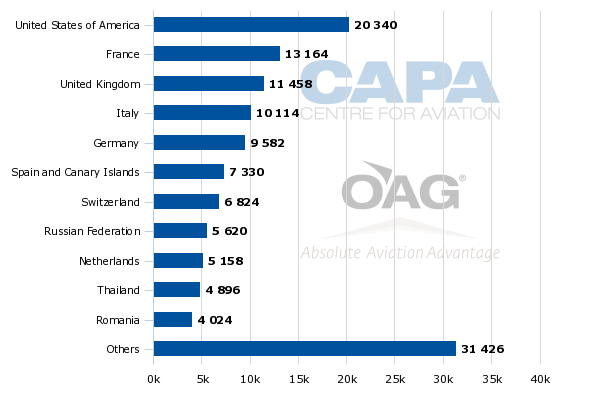 El Al's single largest country by seats is the United States, followed by France and the UK. 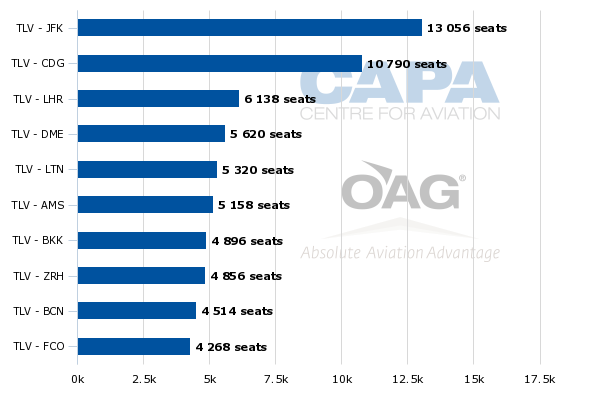 To North America, there has been little change in market dynamics, aside from Delta slightly decreasing capacity. El Al's capacity varies throughout the year, and in Aug-2015 has an approximately 54% share of the market. 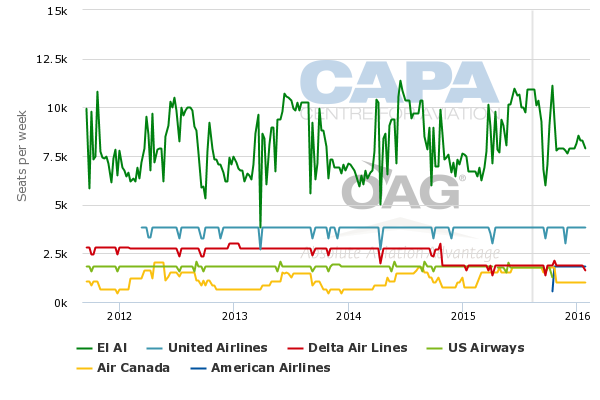 However, competition with Turkish Airlines is growing; Turkish is expanding between Turkey and Israel and Turkey and North America. Turkish is already the largest foreign carrier in Israel, with its relatively close-by base providing strong hubbing opportunities. Turkish's Aug-2015 seat capacity is up about 9% year-on-year and has more than doubled over two years. Turkish is 60% bigger than the next largest carrier in Israel, easyJet. 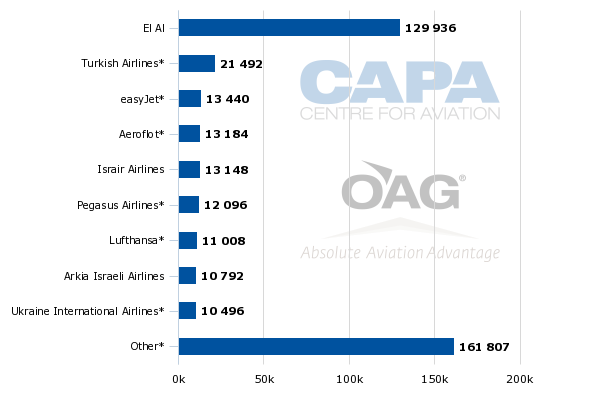 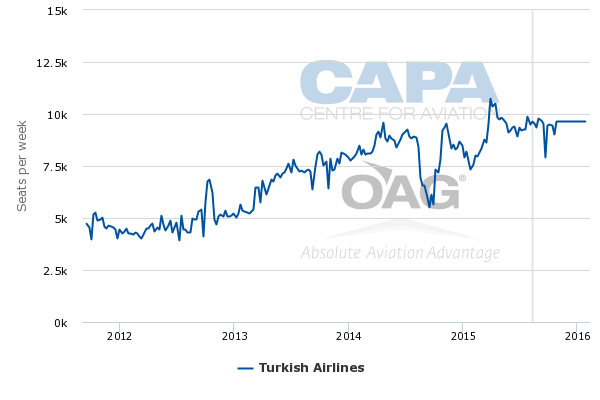 Outlook: There is growing Asian interest in Israel. Is this a market for El Al?

There are a number of scenarios for El Al to replace its 747s and 767s, as planned, with 787s. But this is relatively straightforward compared to the possible outcomes from El Al exercising some or all of its planned 13 options for the 787. Presumably they could be used to replace El Al's 777-200s, but there are only six of these. The options could be exercised before 777 retirement to usher in growth.

As is often the case in market options, Asia holds potential. In particular the focus is China, with the government encouraging investment, which has resulted in a sudden build-up of activity, if from a low base.

Israel is receptive but worries about China's Iran relations and if investment should be welcomed in all sectors. 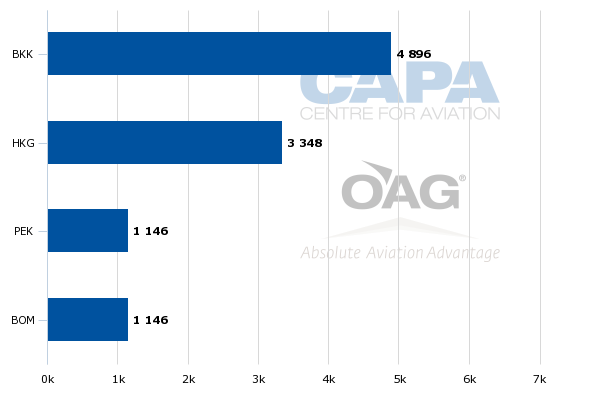 Bangkok is the largest, reflecting holiday interest from Israelis. El Al's three weekly flights to Beijing and six to Hong Kong may receive sudden competition. Of Asian carriers, only Korean Air flies to Israel, and its service is mostly angled around Koreans going on holiday. 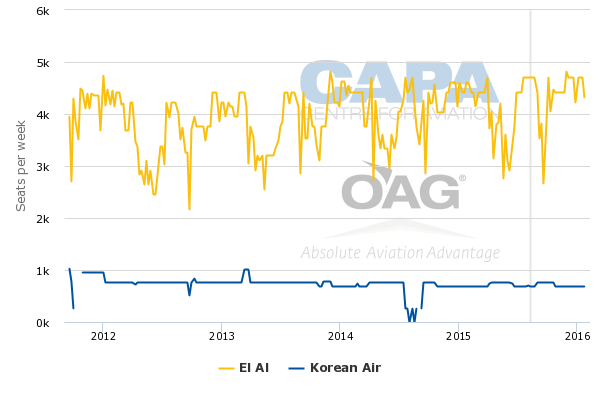 The future thus offers the opportunity for some sudden activity after a quiet period. Hainan Airlines in Jan-2015 announced plans to serve Tel Aviv from Beijing, confirming one of the routes on its 2015 wishlist. This was planned to commence in Sep-2015 with three weekly A330 flights but schedules have not been loaded and the carrier has not provided an update.

Israel's Ministry of Tourism records that approximately 34,000 Chinese tourists visited Israel in 2014, an increase of 36% over 2013. The Israeli media in May-2015 reported Cathay Pacific was in discussions to launch Hong Kong-Tel Aviv service from mid-2016 with A350s. The route has not been announced.

Asian routes provide much excitement but the ramp-up to sustainability and eventual profits are typically longer than expected. Profits can be higher in mature markets, which for El Al would be to North America, although that is hardly devoid of competition.

Traffic on a new Asian route will be weighted towards Asian travellers, which is a market unfamiliar with El Al, unlike Israelis in North America and Europe. El Al will need strength to sustainably serve a new market. While its fleet regeneration will be an important component, there is still much left to change.