EgyptAir is pursuing rapid expansion in Africa as it looks to drive further increases in transit traffic, which has helped the carrier recover from the crisis of early 2011. The Star Alliance carrier expects to post a break-even result for the fiscal year ending 30-Jun-2013 (FY2013) and be back in the black in FY2014, featuring a vastly different and more balanced network than it had prior to the Jan-2011 revolution.

Over the last two years EgyptAir has more than doubled its international capacity within Africa, albeit from a modest base. The increased focus on Africa will continue in 2H2013 as four more destinations are added.

Africa and a bigger operation in the nearby Middle East has helped EgyptAir reduce its reliance on Europe in the aftermath of the crisis, which led to a significant drop in inbound tourist traffic. The larger regional network also has supported a significant increase in transit traffic, from only 3% prior to the crisis to about 17% currently. The increase in transit traffic along with more local traffic within the Middle East/Africa region, where demand has been rising rapidly, significantly improves EgyptAir’s outlook.

EgyptAir’s capacity to Africa has grown by approximately 60% over the last two years from about 26,000 weekly seats in Jun-2011 to about 42,000 weekly seats in Jun-2013, according to CAPA and Innovata data. Africa now accounts for over 17% of the carrier’s total international capacity – still a relatively modest sum but significant as for the first time EgyptAir has more capacity in its home continent than to Western Europe. 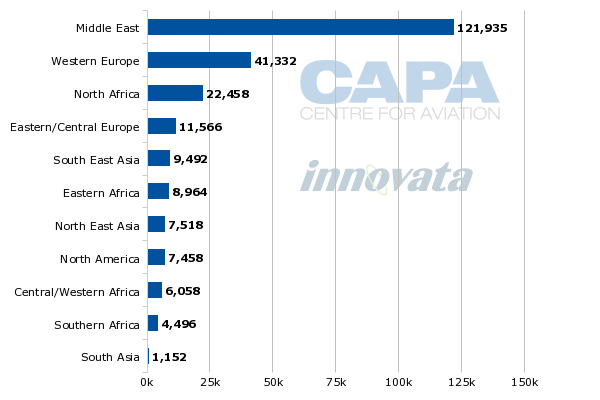 Most of the capacity increase has been driven by additional flights within North Africa, where EgyptAir’s international capacity has roughly doubled over the last two years to about 22,000 weekly seats currently. But the carrier is now starting to focus more on developing its network in other parts of Africa, where EgyptAir historically has had a very limited presence.

EgyptAir launched four weekly 737-800 flights on 1-Jun-2013 to Harare in Zimbabwe, which is served via Dar es Salaam in Tanzania. Harare is only its second destination in Southern Africa after Johannesburg, which is served daily with A330s.

The carrier plans to launch service on 1-Jul-2013 to Abidjan in the Ivory Coast, which will be EgyptAir’s third country in Western Africa. EgyptAir now serves three destinations in Nigeria – Abuja, Kano and Lagos – and Accra in Ghana. Abidjan will initially be served daily via Accra with 737-800s. (EgyptAir is increasing the frequency of its Cairo-Accra service from four weekly flights to daily as it extends the flight to Abidjan.)

EgyptAir is also preparing to launch service to Chad, which would be the carrier’s fourth country in its Central/Western Africa network. EgyptAir CEO Tawfik Assy recently told CAPA that the carrier plans to add, within the next three months, Chad as well as the North African countries of Somalia and Djibouti. Capt Assy says Somalia, where EgyptAir will serve Mogadishu, and Djibouti will give EgyptAir 23 international destinations in Africa.

EgyptAir African and Middle Eastern network: as of 1-Jul-2013 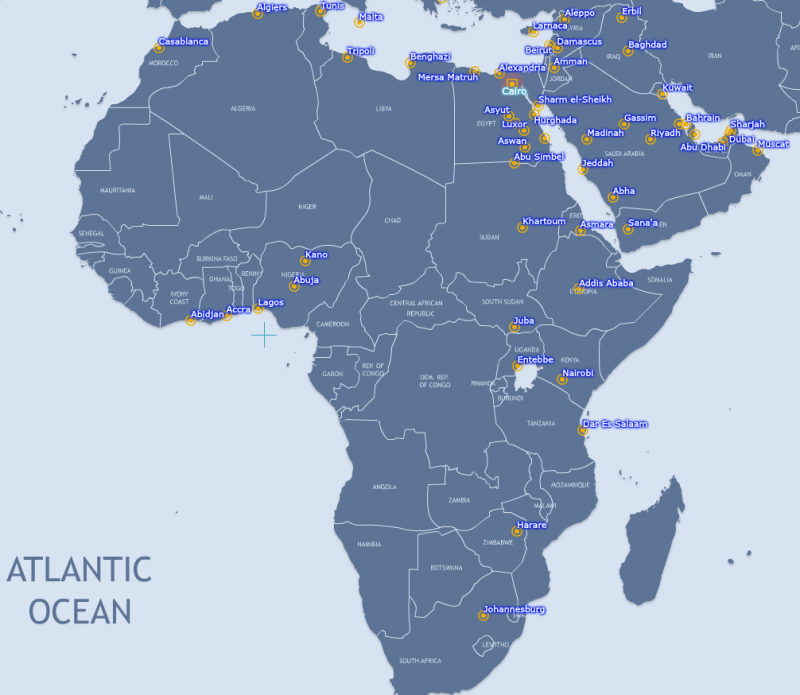 The focus on Africa comes as trade between Egypt and other African countries is rising, leading to growing demand for business travel within the region. Egypt has traditionally been economically more closely tied to the Middle East and Europe but business opportunities within Africa are emerging.

EgyptAir aims to close the gap with larger intra-African airlines

EgyptAir is not the first African carrier to start to pay more attention to its home continent. Africa’s other three major carriers – Ethiopian Airlines, Kenya Airways and South African Airways – have all been pursuing rapid growth of their African networks, organically and in some cases through joint ventures and subsidiaries in other African countries. The growth has come in response to surging demand for more services within Africa as well as a need for these carriers to cover more of Africa for their alliance partners.

EgyptAir is aiming to close the gap with its African rivals and aims to eventually expand its African network to 50 destinations. It also has been exploring potential opportunities for joint ventures in other African countries. 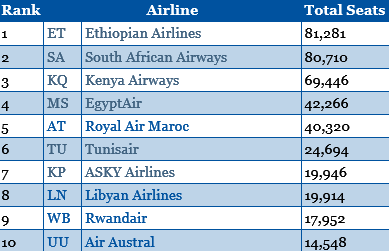 EgyptAir’s new African markets are generally under-served and therefore provide huge opportunities for transit traffic. EgyptAir became only the 11th foreign carrier to serve Harare, while Abidjan is served by 17 foreign carriers, according to Innovata data.

The city-state of Djibouti is currently served by 11 foreign carriers and the Chad capital N’Djamena by eight carriers. Mogadishu is even less served, with only four carriers and just one with an international network. (Turkish Airlines launched service to Mogadishu in 2012.)

EgyptAir offers connections between its growing network of African destinations and the Middle East, where it has a particularly strong network, as well as its traditional network in Europe and its emerging network in the Asia. EgyptAir also launched on 1-Jun-2013 service to Toronto, which gives the carrier two destinations in North America after New York.

While trade between Egypt and other African nations is growing, EgyptAir will need to rely on transit traffic more for its new African destinations compared to most of its existing destinations. EgyptAir has already grown its transit traffic from about 3% prior to the crisis to 17% currently.

In the immediate aftermath of the Jan-2011 revolution, capacity was slashed and up to 40% of the carrier’s fleet was temporarily grounded. While overall capacity was back to pre-crisis levels by Jun-2011, load factors and yields continued to be impacted for another 12 to 18 months.

EgyptAir initially focused on the Middle East in realigning its network

See related report: EgyptAir looks to expand its way out of intensive care in 2013

With the stronger Middle East operation, EgyptAir has increased its reliance on the visiting friends and relatives (VFR) traffic, a segment which it has always catered to but became even more important as inbound leisure traffic dried up. There is a large Egyptian population throughout the Middle East including almost two million Egyptians in Saudi Arabia, which is EgyptAir’s single largest market.

The larger Middle East operation also allowed EgyptAir to pursue more transit traffic within its own network and in partnership with Star Alliance partners. Star does not have any member from the Middle East, giving EgyptAir an opportunity to be the de facto Middle Eastern member by leveraging Egypt’s close proximity to the region.

Eight of EgyptAir’s top 10 international routes are to the Middle East. The only exceptions are London Heathrow and Khartoum in neighbouring Sudan. 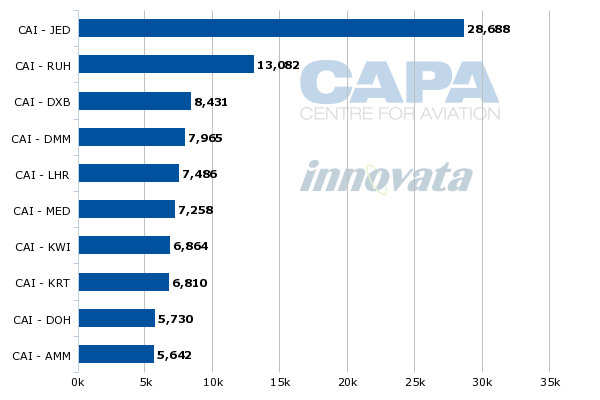 EgyptAir to grow in Asia, starting with Jakarta

The carrier also plans to expand in Asia, which currently accounts for only 7% of its international seat capacity. EgyptAir is well positioned to meet fast-growing demand between Asia and Africa, a market which for now is being more aggressively pursued by Ethiopian and Kenya Airways.

EgyptAir currently serves Mumbai in India; Bangkok and Kuala Lumpur in Southeast Asia; and Beijing, Guangzhou, Osaka and Tokyo in North Asia. Service to Tokyo was resumed in Apr-2012 and to Osaka in Dec-2012.

The Japanese routes, both of which are currently served with two weekly frequencies, provide perhaps the best example of the carrier’s increased focus on transit traffic. Capt Assy says most of the traffic from Tokyo and Osaka are now transiting in Cairo with EgyptAir in recent months benefitting from over 6,000 transit passengers coming off its two Japanese routes.

The carrier’s next Asian destination will be Jakarta, with four weekly flights to be launched by the end of 2013. EgyptAir may also add service to Hong Kong via Bangkok. Currently Kuala Lumpur is served via Bangkok.

EgyptAir is poised to become the first carrier to operate direct flights between Africa and Indonesia, a strategically important market as Indonesia emerges as one of the world’s largest economies.

Jakarta will give EgyptAir coverage of the three main growth markets in Asia – China, India and Indonesia – all of which are seeing growing trade with Africa. Capt Assy says EgyptAir is also evaluating launching service to Sao Paulo, which would allow the carrier to become a player in the fast-growing Africa-Brazil and China-Brazil markets.

EgyptAir's outlook brightens as the bottom line improves, but profitability will remain elusive

The new and improved EgyptAir network should position the carrier for a bright future following a very rough two years. EgyptAir incurred losses of about USD1.2 billion during the fiscal years ending 30-Jun-2011 and 30-Jun-2012. The carrier expects to break-even for the year ending 30-Jun-2013, with revenues for the first time exceeding pre-crisis levels. Capt Assy is confident EgyptAir will be back in the black in FY2014.

While network improvements have led to more transit and local traffic, tourists have also started coming back. Tourist numbers in Egypt grew by 17% in 2012 to 11.5 million. EgyptAir projects about 15 million tourists for 2013, which would put Egypt back above pre-crisis levels. Egypt recorded 14.7 million visitors in 2010.

FY2014 will also be a key year for EgyptAir as it seeks to cap its recovery by placing a major aircraft order, which is needed to renew and grow its fleet. The group (including regional subsidiary EgyptAir Express) currently operates 73 aircraft and has only one A330 on order, according to CAPA’s Fleet Database. EgyptAir is looking to place an order for about 90 new-generation aircraft. 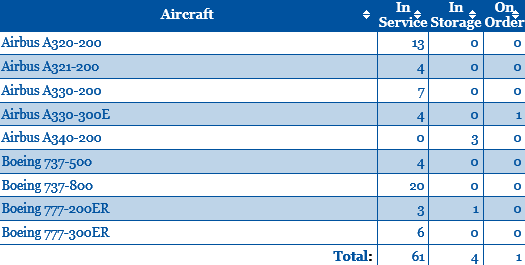 While the carrier has succeeded in expanding transit traffic, pursuing this type of traffic is increasingly competitive and generally results in lower yields. Restructuring the network to focus more on the Middle East and Africa is the right move as these are major growth markets and EgyptAir should be able to capitalise on Egypt’s strategic location. But competition in the region is intensifying as major Gulf and East African carriers pursue aggressive expansion.

EgyptAir has survived the biggest crisis in its 80-year history. While its outlook is significantly brighter than the storm clouds faced in 2011/2012 and it is taking bold steps to realign its strategy, profitability will likely continue to be elusive.