EasyJet has let slip that winter profits are falling, in spite of fuel price reductions. For the first time, its trading update for Oct-2015 to Dec-2015 (1Q of its financial year FY2016) gives a cost per seat figure, in addition to the usual revenue per seat. Europe's second largest LCC did not announce a 1Q pre-tax profit figure, but it can be calculated from the other reported data that it dropped 25% year on year.

This was due to revenue per seat falling more than cost per seat. The weakness in unit revenue was the result of terrorist activity affecting demand in Sharm El Sheikh and Paris in Nov-2015. EasyJet actually performed better than expected on costs, but weak unit revenue has become a trend in recent quarters and is set to continue in 2Q.

Of course, the airline makes all its money in the summer, and so - large percentage changes in the small winter profits do not say much about the full year. EasyJet still expects a higher pre-tax profit this year, but the strong double digit earnings growth of recent years is becoming harder to repeat.

In the past, easyJet's interim management statement for 1Q (it has a Sep year end, so 1Q is Oct-Dec) has not contained details of profits for the quarter, but it has reported data on traffic, revenue per seat and revenues. On the cost side, it has always indicated the rate of change in cost per seat compared with the same period a year earlier.

This time, however, easyJet has given a figure in GBP for cost per seat, which enables a calculation of total costs (by multiplying this figure by the number of seats). Since it has also reported revenues (as usual), we can derive a figure for its pre-tax result as the difference between revenue and costs (easyJet's cost per seat figures include finance costs). Strangely, however, easyJet did not give a 1Q profit figure itself.

EasyJet reported a pre-tax profit of just GBP7 million in 1H2015, so we can deduce that its 2Q result was a loss of GBP19 million. The 1H profit last year was its first positive result for the winter half year in more than a decade, and was entirely dependent on 1Q. Its weaker result for 1Q2016 puts pressure on its ability to achieve another positive pre-tax profit in 1H2016.

EasyJet increased its seat capacity by 7.3% in 1Q2016, a little less than its guidance of 8.0% for 1H2016 given in Nov-2015, mainly due to the impact of the disruption in services to Sharm Al Sheikh and the terrorist attacks in Paris in Nov-2015. Capacity growth continued to focus on its new bases at Amsterdam, Hamburg and Porto, and on major markets such as UK and Switzerland.

In spite of the slightly slower than expected overall capacity growth, 1Q passenger numbers increased by 8.1%, with load factor gaining 0.6 ppts to reach 90.3%. This load factor performance was achieved through lower fares in response to the negative demand impact of the events in Egypt and France. If easyJet can improve its 2Q load factor by just 0.1ppts from its 2Q2015 level of 89.9%, it will have achieved 90% or higher in all four quarters of the year.

Revenue per seat down by 6.9%, affected by currency and events in Egypt and Paris

Revenue per passenger fell by 7.6%, only partly offset by the load factor gain so that revenue per seat (RPS) fell by 6.9% to GBP52.28. This RPS performance was also weakened by currency movements: excluding foreign exchange effects, RPS fell by 3.7%. This compares with easyJet's guidance, at the time of its FY2015 results in Nov-2015, that its 1H2016 RPS ex currency would experience a "slight decline".

The worse than guided result was due to the Egypt and Paris-related demand factors already noted. On a conference call with analysts to discuss the 1Q trading statement, CEO Dame Carolyn McCall said that the underlying demand environment was in line with expectations and had been strong in Oct-2015, before the incidents occurred.

She said that the Paris events had an impact on bookings made in Nov-2015 and Dec-2015 for the Jan-Mar period and so, some weakness in RPS could be expected in 2Q of FY2016 (guidance is now for a mid-level single digit rate of decline in revenue per seat at constant currency), although she saw the impact as short term: "It is amazing how resilient the model is," she enthused. 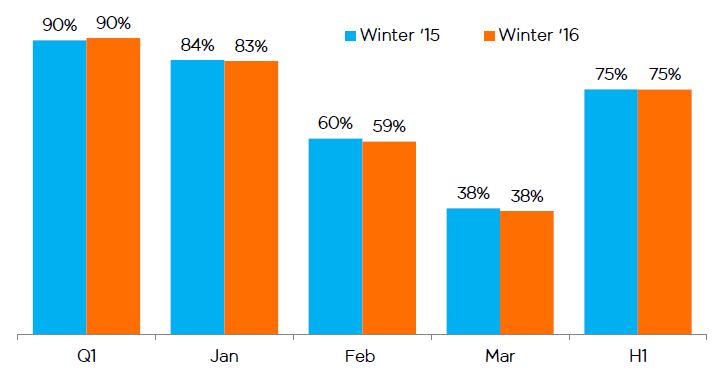 By country market, easyJet's fastest seat capacity growth in 1Q was in the Netherlands, where expansion at its new Amsterdam base led to growth of 24%. It also grew sharply in Portugal (+19%) as a result of the new base at Porto, and in Germany (+11%), reflecting the new Hamburg base. There was strong single digit growth in the UK and Switzerland. In France, capacity growth was 6%, while in Italy it was only 5%, and Spain just 4%.

An area of easyJet's business that gave some cause for concern in FY2015 was its on-time performance (OTP, the proportion of flights arriving within 15 minutes of schedule). Since hitting a peak of 88% in FY2012, it had slipped every year and was back down to 80%. Moreover, it had fallen through every quarter of FY2015, ending at around 70% in 4Q.

In 1Q2016, easyJet's OTP recovered from its 4Q2015 low to reach 82%. Nevertheless, although this was a creditable improvement quarter on quarter, the 1Q2016 figure was 4ppts below its 1Q2015 level of 86% (in spite of a milder winter). There was an improvement in operational performance compared with the summer at London Gatwick, easyJet's biggest base.

However, ATC changes at Brest had a negative impact, as did increased security and immigration controls. There was also an increase in cancellations versus 1Q2015 as a result of the suspension of Sharm El Sheikh services.

EasyJet will certainly be hoping to sustain an improvement in OTP throughout FY2016.

The curves of year on year change for both revenue per passenger and revenue per seat have been on a broadly downward path for more than a year. These trends largely reflect the changing trend in the value of GBP versus EUR (see chart below).

The EUR had been weakening year on year versus GBP from easyJet's 3Q2014 to 3Q2015 (Apr-Jun). This meant that revenues earned in EUR (which made up 40% of total revenue in FY2015) converted to a smaller number in GBP, reducing easyJet's reported revenue per seat figures.

A reduction in the rate of year on year growth of GBP versus EUR was accompanied by a stronger RPS performance in 4Q2015. However, in 1Q2016, the RPS curve took another downward turn, in spite of a further slowing of GBP's appreciation versus EUR. This again demonstrates the negative impact on yield of the events in Egypt and Paris.

Nevertheless, as we have noted before, and in spite of easyJet's insistence that the underlying revenue per seat environment is healthy, the fact remains that growth in revenue per seat is now hard for the airline to sustain.

This at least raises questions about pricing trends in its markets. Further significant load factor improvement appears to be unlikely and so, easyJet will increasingly need to rely on revenue per passenger as the main tool for growing revenue per seat in the future.

Year on year change in easyJet's revenue per seat and revenue per passenger (left hand axis), and change in GBP versus EUR (right hand axis, reverse order) 1Q2014 to 1Q2016* 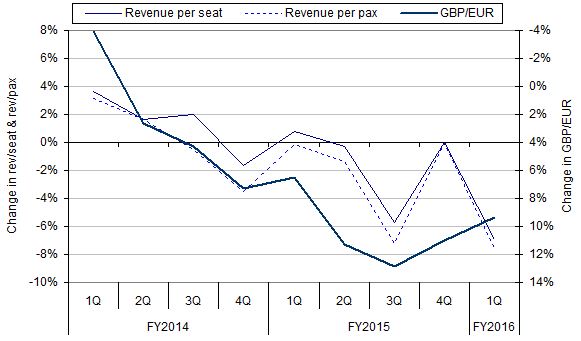 Currency movements, specifically the weaker EUR versus GBP, have also worked to reduce cost per seat. easyJet's reported year on year change in cost per seat in 1Q2016 was a drop of 6.2% (less than the 6.9% drop in RPS). At constant currency, it was down by only 3.7% (this is in line with the drop in revenue per seat at constant currency).

Lower fuel prices also helped to bring down unit cost. Excluding fuel, cost per seat was down by 2.3%. At constant currency, ex fuel cost per seat was up by 1.3%, but this was slightly better than easyJet's guidance for a 2% increase in FY2016. The improvement versus guidance was due to lower levels of de-icing than expected, thanks to milder winter weather, and additional savings from the "easyJet lean" cost programme.

EasyJet competitive on cost, versus legacies "and their LCC subsidiaries"

Dame Carolyn remains confident that easyJet remains well placed to compete against legacy airlines on cost, adding, "that includes their low cost subsidiaries, whose fares and costs are higher than ours".

Nevertheless, new CFO Andrew Findlay, who joined the airline in Oct-2015, has been examining ways in which to extend the "easyJet lean" cost programme, which produced GBP16 million of savings in the quarter. The demand weakness after the Paris events and the consequent fall in revenue per seat focused easyJet management on tightening its control over cost per seat.

The airline now expects FY2016 ex fuel cost per seat at constant currency to be in the range of flat to up 1% (and up 1% in 1H), compared with previous guidance for a 2% increase.

EasyJet's improved guidance on unit cost and a lower fuel price outlook than previously anticipated balanced the weaker unit revenue outlook, and the company said that it was comfortable with the current consensus forecast of analysts for its FY2016 pre-tax result. CAPA understands that this is somewhere in the mid GBP700 million area, compared with GBP686 million in FY2016. EasyJet makes the vast bulk of its annual profit in the summer half and so the 1Q result is never much of a pointer to the FY number.

EasyJet does not usually give an indication of the FY profit outlook at this stage of the year, so its statement that it is happy with the current consensus suggests some confidence. This would be an increase in the FY2016 result versus FY2015 of around 8% or 9%, quite a slowdown from the double digit rates of profit growth that have characterised Dame Carolyn's stewardship of easyJet.

Nevertheless, it would still represent a fivefold increase in pre-tax profit in the six years since FY2010, the year in which she joined the company. The easyJet share price has increased fourfold since Dame Carolyn took over as CEO in Jul-2010. The next six years are unlikely to witness a repeat of these achievements.