After growing its revenues by 11% in FY2013, easyJet managed further revenue growth in 1QFY2014 (Oct to Dec-2013), albeit at the slightly slower rate of 7.7%. Revenue per seat growth dropped from 7% in FY2013 to around 3% in 1QFY2014. The shift in the timing of Easter has prompted it to forecast a wider 1H loss, but this should not detract from an underlying solid performance. This is a seasonal business, but easyJet has managed to contain winter losses in recent years.

Nevertheless, the outlook for revenue per seat remains cautious. With load factors at consistently high levels, the scope for further growth will depend mainly on capacity. EasyJet and competitors look set to step up capacity growth in the summer schedule, although most of the legacy carriers are still cutting capacity or keeping growth low. This may increase downward pressure on easyJet's yields and unit revenues, increasing the need to continue to manage yields upwards by attracting business passengers, and developments such as allocated seating and improved website distribution.

EasyJet's 1Q update does not give a full earnings report, but provides data on revenues and an indication of unit cost performance. Compared with the same period a year ago, easyJet saw revenue growth of 7.7% to GBP897 million, driven by seat growth of 4.1% to 16.1 million and revenue per seat up 3.4% to GBP55.71.

Passenger load factor was almost flat, up only 0.1%, but, at 88.7%, does not seem to have much further scope for big gains. Cost per seat excluding fuel increased by 3.0%, or 1.2% at constant currency. 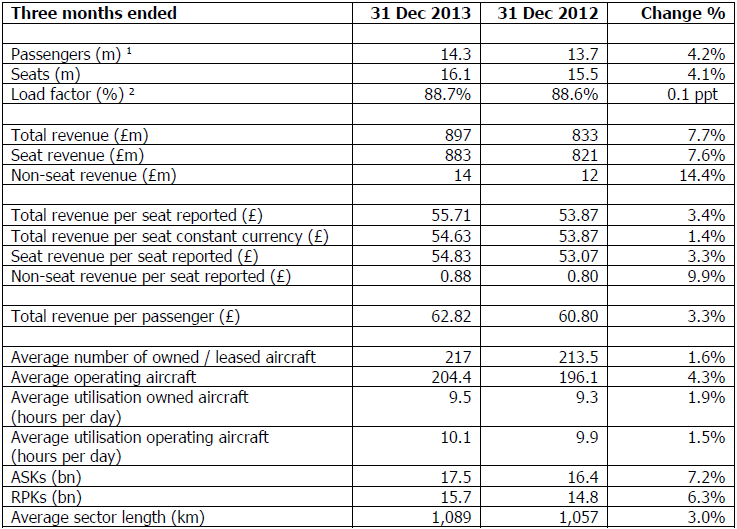 Growth in revenue per seat, reported at 3.4%, was 1.4% at constant currency in 1QFY2014, which compares with easyJet's guidance in Nov-2013 that revenue per seat at constant currency was expected to be “very slightly up on the prior year” in 1H. Its 1Q statement says that this growth was as expected, giving some indication of how to calibrate “very slightly up”.

The total revenue per seat figure of GBP55.71 consisted of GBP54.83 of what easyJet calls seat revenue and GBP0.88 of non-seat revenue. This classification was introduced two or three years ago and makes comparison with other airlines’ ancillary revenues impossible.

easyJet says that seat revenue per seat was boosted by a number of factors. These included what it calls “careful capacity management”, for example the closure of underperforming routes such as Madrid to Bilbao and Barcelona to Lisbon. It also benefited from the ‘generation easyJet’ marketing campaign, improvements to the website, a simplification of fees and charges and strong allocated seating performance.

The performance of allocated seating has been enhanced by easyJet's decision to yield manage it on some sectors. On a conference call to discuss the 1Q statement, easyJet CEO Carolyn McCall said that there was no change to the pricing of allocated seating on around two thirds of the network. On sectors of more than 2.5 hours, however, where demand for seats in rows that offer extra leg room is high, pricing has been “tweaked” to maximise revenues. On the other hand, on shorter sectors, prices have been lowered to encourage uptake.

Allocated seating has enjoyed a strong take-up from passengers travelling for business, particularly those booking through the GDS. Introduced in 2QFY2013, its year-on-year growth performance in 1QFY2014 was similar to that seen in the previous three quarters, but this will be the last quarter to benefit from the annualised uplift.

The quarter saw an increase in business passenger numbers of 8.9% year-on-year. According to Ms McCall, this performance is good across all easyJet's markets. Speaking to analysts on the conference call, she described the airline’s initiatives to attract business passengers as “a long, long game”, adding that “it has taken us a good two years to get all the pieces of the jigsaw in place”. She said this was just one element of easyJet's ability to improve revenue per seat.

Growth in cost per seat, reported at 3.0%, or 1.2% at constant currency was slower than the growth in revenue per seat. Unit cost growth was driven by increased airport charges, increased maintenance costs reflecting the ageing of the fleet ahead of new deliveries planned under easyJet's new Airbus order, and an increased proportion of leased aircraft.

It was also affected by disruption events such as flooding at Gatwick, air traffic control (ATC) strikes in Italy and ATC failures in the UK. This growth was mitigated by a slower rate of growth in airport charges at regulated airports, the increased proportion of A320s versus A319s in the fleet and the ‘easyJet lean’ cost programme.

The average number of operating aircraft in easyJet's fleet was 204.4 in the quarter, a year-on-year increase of 4.3%, in line with passenger growth. A320s were 29% of the total fleet in the quarter, up from 26% a year earlier. This helped to contain growth in cost per seat, since easyJet’s A320s have 180 seats compared with 156 seats on its A319s, but the full year impact of the increased number of A320s on unit costs will be less than in 1QFY2014. 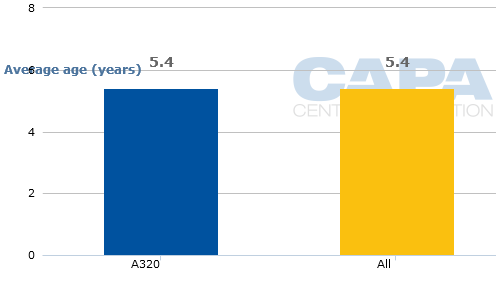 Forward bookings are in line with a year ago

As at 21-Jan-2014, easyJet's forward bookings for 1HFY2014 (Oct-2013 to Mar-2014) stood at 74% of seat capacity. This is in line with the same time last year, although forward bookings for the month of Mar-2014 are slightly below last year due to the shift of Easter from March to April this year. 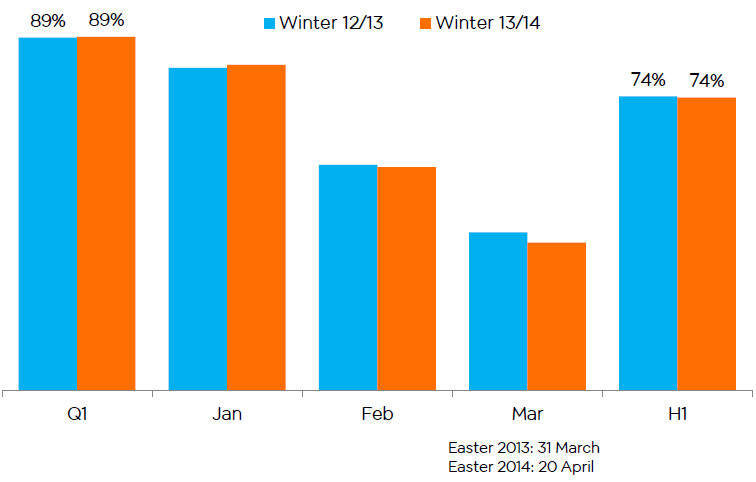 Ms McCall said that there was “no fundamental change” in the capacity environment and that capacity in the market should remain “relatively tight”, adding that easyJet's main competitors remained the legacy carriers at the primary airports.

This has resulted in the UK being the most challenging market in terms of yield. “Yield is driven by capacity”, said Ms McCall. Although the UK economy has returned to growth, easyJet's CFP Chris Kennedy described the UK recovery as “corporate rather than consumer” driven. Ms McCall added that, in mainland Europe too, “there are no warm winds around the consumer”.

Against this still cautious economic backdrop, the outlook for European market capacity growth remains broadly stable. Based on OAG data, Ms McCall reported that competitor seat capacity growth plans for the first half of easyJet's financial year (i.e. the six month period Oct-2013 to Mar-2014) were as per the table below.

In easyJet's markets, total capacity growth will be 0.5% for this period. Given easyJet growth of 3.6%, this meant that aggregate competitor capacity will be down by 1.3% for the six months. This is broadly similar to the outlook given at the time of easyJet's FY2013 results in Nov-2013.

Rome Fiumicino will become a battleground

Regarding Italy, and looking into the summer schedule, there is expected to be an overall increase in capacity at Rome Fiumicino, in spite of Alitalia’s capacity cuts. Vueling is set to launch 14 routes from the airport in northern summer 2014 and Ryanair is establishing a base at Fiumicino and transferring its domestic Italian services from Rome Ciampino.

EasyJet is also expanding at Fiumicino, increasing its capacity there by one third this spring with new routes and additional capacity on existing routes. The key competitive battleground looks set to be on international routes with Vueling. While noting that easyJet has been the number two operator at the airport “for some time”, Ms McCall downplayed the significance of this increased competition, saying that it related to “a small part of easyJet's overall network”. 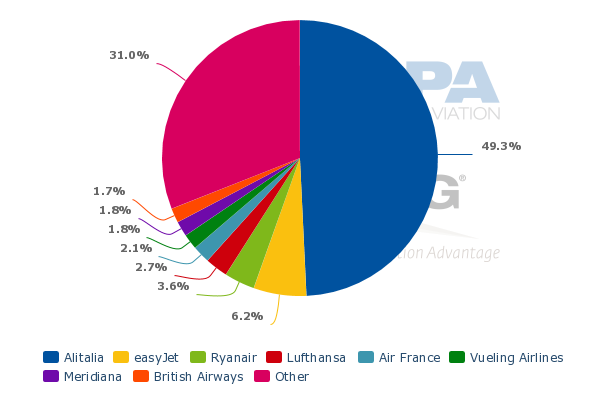 Outlook for FY2014: no surprises

EasyJet gave guidance for the first time on its expected 1HFY2014 pre-tax result. Compared with a loss of GBP61 million in 1HFY2013, it expects a loss of between GBP70 million to GBP90 million in 1HFY2014. The principal reason for this expected widening of the first half loss is the change in the timing of Easter from Mar-2013 (which was in 1H) to Apr-2014 (which is in 2H). Last year, 1H benefited from GBP25 million of additional revenue as a result of Easter.

Adjusting for the Easter impact, easyJet's guidance on its first half loss suggests an underlying result broadly similar to, or slightly better than last year. In addition, the individual elements of its guidance for both 1H and FY2014 are either unchanged, or improved, relative to guidance given in Nov-2013.

Nevertheless, the improvements to guidance are minor and, moreover, there is still no guidance on FY revenue per seat and so it is not possible to extrapolate from this guidance what the company’s expectations are for its FY2014 profit. As easyJet says: “With around 15% of second half seats sold year to date, in line with this time last year, it is still too early to give guidance on second half yields or expected profits.”

As we noted at the time of its FY2013 results, the key unknown for this year’s easyJet outlook is revenue per seat in 2HFY2014.

This metric performed solidly in 1Q and easyJet expects this to continue in 2Q, but the outlook for the summer months that represent its fiscal 2H is less clear. Capacity growth by easyJet and its competitors looks set to increase in the summer and this could exert downward pricing pressure and lead to weaker revenue per seat. Against this possibility, easyJet's initiatives to attract business passengers and to improve revenues from features such as allocated seating may shore up or grow revenue per seat.

If easyJet were to repeat its 1Q performance on revenue per seat growth at constant currency, the other elements of its guidance would combine with this to point to a FY2014 pre-tax profit figure of around GBP525 million. This is 10% higher than last year, but 5% below the current analysts’ consensus forecast of around GBP550 million.

Either figure would represent a level of profitability envied by most airlines, but, after growing profits by more than 50% last year, it seems easyJet is entering a more pedestrian period in terms of earnings growth.