Almost all LCCs across Europe and North America ended the day down sharply, pacing the major markets in the US and Europe. US shares posted their biggest one-day drop in a month and European shares posted their biggest one-day drop in five, as concerns that China will move to curb growth and Ireland’s sovereign debt issues came back into focus. easyJet (-4.8%) was the day’s biggest loser on the release of financials.

easyJet announced it recorded GBP121.3 million in net profit in the 12 months ended 30-Sep-2010, an increase of 70.4% increase over the pcp. The net result came in ahead of analyst expectations, which anticipated a GBP114 net profit. Profit before tax increased 330.9% to GBP154 million and revenue for the period came in at GBP2.97 billion. Passenger numbers rose 8% to 49 million. Going forward, CEO Carolyn McCall stated the airline is looking to increase its share of the corporate travel market and generate a GBP5 profit per seat.

Despite the strong results, ongoing concerns between the airline and majority shareholder, Sir Stelios Haji-Ioannou, weighed on the shares, which fell 4.8% to GBP 448 pence – their biggest one-day fall since late July. While Sir Stelios welcomed reports of a dividend, he was underwhelmed with the news, calling for dividend payments to be increased to 50% of EPS in the short-term and he stated he expects profits to reach GBP480 million over the next three years – a figure far above analysts' expectations. He added that if the fleet grows to more than 200 aircraft, he wants to see additional aircraft generate GBP2 million.

Despite an upbeat outlook from Ms McCall, analysts remain wary about easyJet shares, with many maintaining a cautious stance until Sir Stelios shows support for the strategy.

Across the Atlantic, US LCCs all closed lower as well. GOL (-1.0%) was cut to “market perform” from “outperform” by Raymond James after the LCC missed the broker’s 3Q earnings forecast.

Tiger up on strong traffic results

Tiger closed up 2.7% after announcing it carried 5.6 million passengers over the past 12 months, a 39% increase over the pcp.  Load factor for the period was 86%. CEO Tony Davis commented that bookings remain strong going into the Dec-Feb period, typically the carrier’s strongest period. 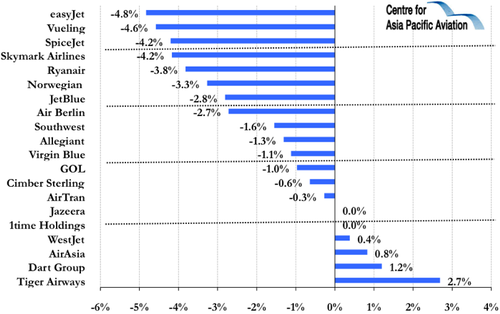