The airline business is a seasonal one and European airlines tend to lose money in the winter. EasyJet is no exception in this respect, but it has again narrowed its winter loss in 1HFY2014. With targeted capacity growth, it increased its revenue per seat faster than cost per seat.

Revenue per seat was also helped by a growing number of passengers flying for business purposes. On a rolling 12 month basis, easyJet said that it carried 12 million business travellers in the year to Mar-2014, around 20% of total passenger numbers. Since it started to target business passengers in 2010, the number has grown by 44%, demonstrating what can be achieved without having a business class cabin.

Competitor capacity growth is accelerating this summer and easyJet will see its own growth accelerated by the inclusion of Gatwick slots acquired from Flybe. This may lead to some downward pressure on yields, although the strength of its network and product features such as allocated seating may mitigate this. Certainly, narrower winter losses place it well for another year of healthy growth in profit.

In 1HFY2014 (six months to Mar-2014), easyJet narrowed its loss before tax to GBP53 million from GBP61 million a year earlier. This was a little better than the guidance it gave on 25-Mar-2014 that the loss before tax would be in the range GBP55 million to GBP65 million. It was the third successive year in which the seasonal losses of the winter half were reduced. Its loss per seat was GBP1.70, a 69% reduction in the loss per seat of GBP5.47 in 1HFY2011.

Revenues grew by 6.3% to GBP1,702 million, but return on capital employed dipped slightly to -1.2% from -0.9%. The company's cash balance fell slightly, but remained in excess of GBP1 billion and balance sheet debt also fell, so that its net cash position increased from GBP433 million a year earlier to GBP449 million at the end of Mar-2014.

With the inclusion of operating leases capitalised at seven times annual rentals, net debt as a percentage of total capital employed increased from 1% to 18%, but easyJet still has one of the strongest balance sheets among European airlines. 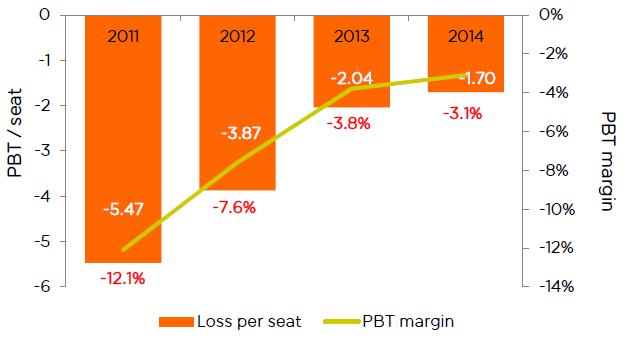 EasyJet added seat capacity at the rate of 3.6% year on year and carried 4.0% more passengers, driving a 0.4 ppt increase in seat load factor to 89.0%. This is a very high load factor for the winter season and easyJet has almost completely eliminated the gap between 1H and 2H load factors: its FY2013 load factor was 89.3%, one of the highest in the industry.

CEO Carolyn McCall said at a presentation to analysts on the 1H results that there was a "constant debate" about the balance between load factor and yield. CFO Chris Kennedy added that easyJet does not target load factor, but total revenue per flight.

Its average sector length increased by 3.1%, driving ASK growth of 6.8%. Its passenger load factor calculated on the basis of RPK divided by ASK actually dipped slightly, from 90.9% to 90.5% (according to our calculations). This decline contrasts with the load factor gain based on the number of passengers divided by the number of seats, implying that the passenger growth in 1H was more concentrated on shorter routes. However, since the ASK load factor is still higher than the seat load factor mentioned above, this implies that longer routes are being filled better than shorter routes.

Total revenues grew by 6.3%, ahead of the growth in the number of seats, so revenue per seat increased by 2.6% to GBP54.80 (at constant currency, revenue per seat grew by 1.5%). Unit revenue performance was helped by improved capacity allocation across easyJet's route network, improvements to the website and the digital offering, allocated seating and bag charges, increased sector lengths and an 8.5% increase in higher yielding business passengers. In addition, easyJet's competitors cut capacity by 1.3% on its routes in the period.

As noted above, seasonal load factor differences have all but been eliminated, but there is still a significant unit revenue difference. EasyJet's 1HFY2014 revenue per seat was much lower than the figure of almost GBP70 for 2H2013 (last northern summer). Winter demand must be stimulated with lower prices, but easyJet's cost per seat in the winter half is typically very similar to its summer cost per seat and this gives rise to seasonal winter losses.

EasyJet has reduced its losses in the winter half year every year since FY2011, because it has grown its 1H revenue per seat by 21%, while holding the increase in 1H cost per seat to 12%. 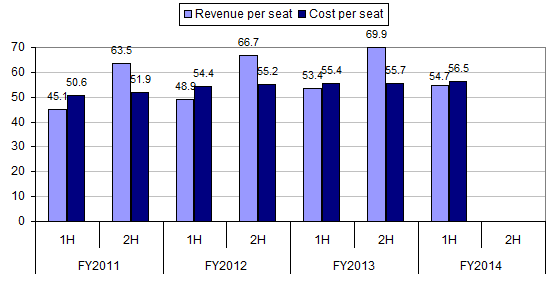 Note: cost per seat based on costs at the pre-tax profit level
Source: CAPA - Centre for Aviation, easyJet

The company's 'easyJet Lean' programme delivered savings of GBP14 million in the six months and Mr Kennedy told analysts at the 1H results presentation that he was confident that the programme would continue to provide GBP20 million to GBP30 million every year.

EasyJet cost per seat and year on year change at constant currency: 1HFY2014 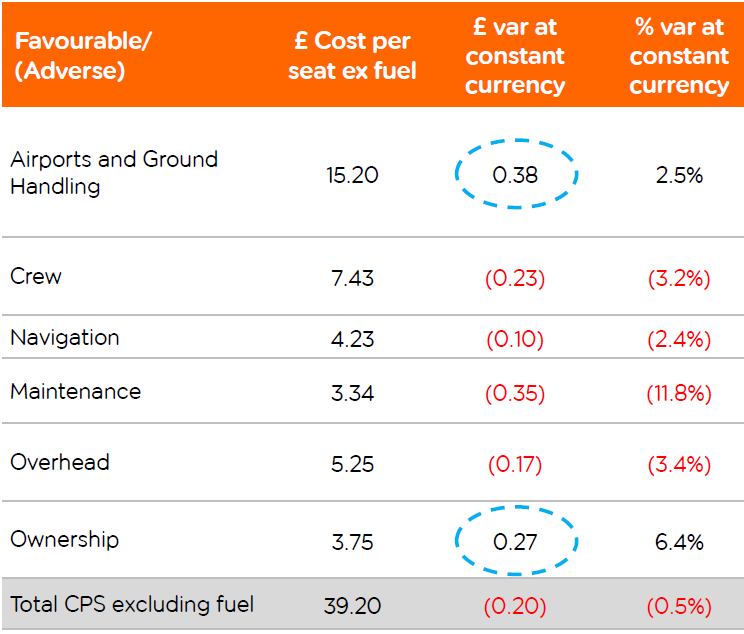 In 2HFY2014 (Apr to Sep), easyJet plans seat growth of 6.7% and, according to its analysis of OAG data, competitor growth in easyJet's markets will reach 2.9% this summer, after a cut of 1% last summer. This means that total seat growth in its markets (easyJet plus competitor capacity) will accelerate to 4.1% in summer 2014 from 0.6% in summer 2013, according to the same source. While capacity growth is increasing, easyJet describes it as still being disciplined.

Around one third of easyJet's seat growth (2.6 ppts) this summer comes from its acquisition of Gatwick slots from Flybe, which was effective from Apr-2014. According to Ms McCall, it takes 12 to 18 months to "optimise a slot portfolio" such as that acquired at Gatwick and, although mainly not used for new routes, the additional capacity will take time to mature.

EasyJet, the biggest operator at the airport, is in consultation with Gatwick about consolidating its operations into a single terminal. This move, which easyJet hopes may take effect in 2017, should be beneficial both for the passenger experience and for operational efficiency. 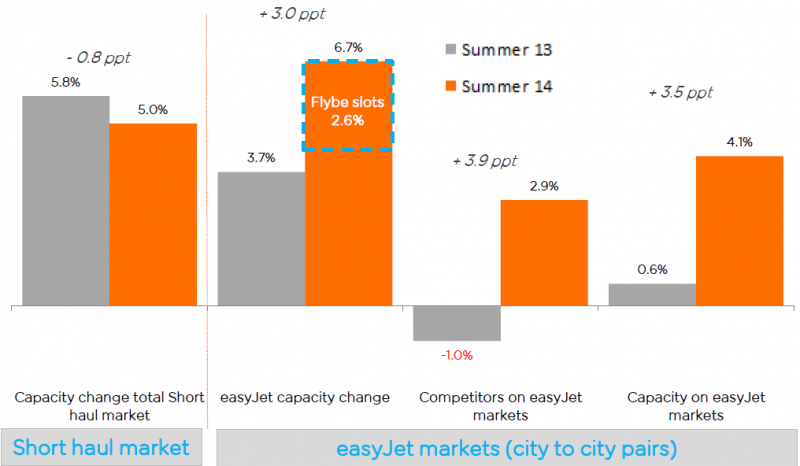 Fastest growth planned in Germany, Italy and Switzerland this summer

ROCE improvements across the network

Return on capital employed is a key financial metric for easyJet, both for the company as a whole and on a route by route basis. In the 12 months to Mar-2014, easyJet increased the number of routes beating its target ROCE of 12% and network returns improved overall.

Although total ROCE fell slightly in 1H2014, the key to full year returns is the summer half and the company has consistently improved its FY ROCE since FY2009.

EasyJet's 1H results presentation made reference to IATA's forecast that European short-haul passengers will increase by between 60 million and 70 million by 2018 at an average annual growth rate in the region of 3% pa. The carrier's own analysis of aircraft deliveries suggests an additional 450 narrowbody aircraft will enter the market by 2018, at a similar annual growth rate of around 3%.

Against this backdrop, easyJet's FY2014 seat growth of a little over 5% and medium term planning scenario of annual growth in the range of 3% to 5% looks reasonable. It has a strong pan-European network, which gives it a presence in more of the top 100 city pairs than any other European airline and where it is number one or number two in almost three quarters of its airports. This strong network and its cost advantage versus legacy carriers justify a modest growth premium relative to the market.

FY2014 set to be another year of double digit profit growth

Looking at other elements of the outlook for the rest of FY2014, the movement of Easter into the second half of easyJet's financial year is expected to have a positive impact on its 2H2014 revenue per seat, which the carrier forecasts will grow at a low single digit rate. It expects cost per seat, ex fuel and currency, to be up around 2% in 2H2014 and 2H fuel costs to be up to GBP10 million higher than last year. It also expects a GBP5 million to GBP10 million positive impact from foreign exchange movements, including those related to fuel.

As before, the key variable in easyJet's guidance seems to be revenue per seat. If easyJet were only to repeat its 1H performance of 1.5% growth in revenue per seat at constant currency, the other elements of its guidance would point to a FY2014 pre-tax profit figure of around GBP570 million. This is almost 20% higher than last year and roughly 10% higher than the figure implied by easyJet's guidance in Jan-2014.

Although, as we have previously observed, it does not look possible to repeat the 50% profit growth achieved last year, both the level of profit and the growth targeted for 2014 demonstrate a business that is performing strongly.