easyJet CEO Carolyn McCall stated the carrier is targetting European network carriers as it seeks to increase its share of the business travel market and boost revenues, marking a significant change in strategy for the LCC.

“We do leisure and we do it really well. The business traveller proposition is another kind of product. It’s quite a different thing. For the first time ever, easyJet has two product propositions,” Ms McCall said.

MsCall also has warned of an industry "shake-out" with routes likely to be axed and fares set to rise, as oil remains well above USD100 per barrel.

Ms McCall estimates that business passengers comprise around 18% of total passenger numbers, with the carrier seeking to boost this to 21%. Business passengers pay on average between 10% and 20% higher fares as they book later and pay for easyJet options such as priority boarding. At present, yield growth has been reduced by the carrier’s capacity growth.

As part of efforts to maintain and increase this yield premium, easyJet is introducing a Flexifare system, which it started testing in Nov-2010, across its network from this summer as part of efforts to develop a product more attractive to business passengers. Ms McCall stated the signs from the testing are “positive”.

The premium includes preferential boarding, free hold luggage and the ability to change aircraft just two hours before flight time. easyJet stated introducing allocated seating is not a “first-level priority” with Ms MCall also insisting the airline would retain its “egalitarian” spirit. “Low cost is in our DNA as are low fares; there will be no business class as such; but we will win cost-conscious corporate customers,” she said.

The service will cost around GBP100 per journey compared with GBP250 a trip offered for equivalent services by flag-carriers British Airways, Air France-KLM or Lufthansa, according to easyJet.

The airline has also put together a 15-strong sales team that will target businesses and travel bookers in its UK home market, as well as destinations continental Europe such as Zurich and Paris. The team has a mandate to negotiate with the travel departments of both FTSE 100 and smaller corporates.

Ms McCall, who took over in Jul-2010 as CEO of Europe’s second largest LCC, stated the carrier is focusing on organic growth in key business market such as London, Paris and Geneva as part of efforts to catch up with network carriers in terms of frequencies on key routes.

According to Panmure Gordon, only 2% of the carrier’s network has five or more daily frequencies compared with 53% at British Airways.  The carrier is however focussing on improving average frequencies on business routes. 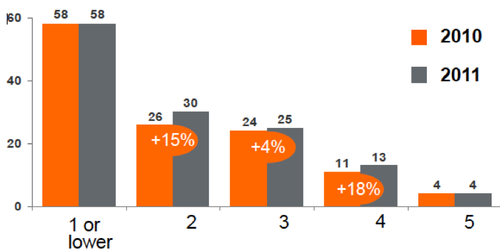 easyJet stated it has a “leading presence” on the Top 100 routes in Europe, with strong positions in key markets. The carrier added that it has achieved the number 1 or 2 position on 459 of its route, marking an increase of 59 routes.

According to easyJet, nearly 60% of its passengers depart from destinations in continental Europe with strong brand recognition at both ends of the route driving traffic.  “We are not so UK-centric to think that we only compete with BA. We compete with Air France out of France, we compete with KLM out of Amsterdam, so we compete with all of those carriers,” Ms McCall said.

Departing passengers by country of origin in 1Q2011 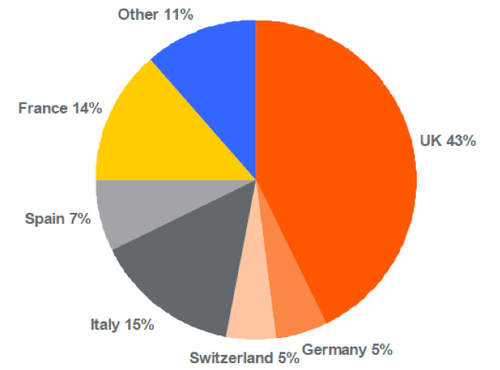 The LCC has achieved market share gains in the following key European markets as follows, coinciding with a 18% increase in European capacity in 1HFY2011: 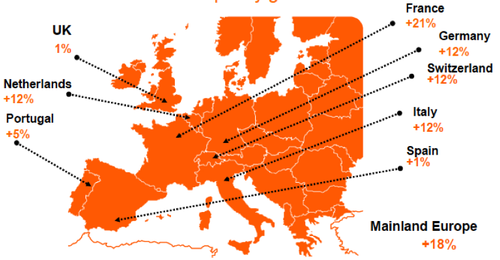 As part of this European growth, easyJet stated Paris has become its second largest market in Europe with a 10% share of seats. The carrier operates 100 departures per day with around 6 million passengers to/from Paris in 2010 There are opportunities for growth with LCC penetration in France half the European average. The carrier is uniquely positioned to grow due to local employment contracts. 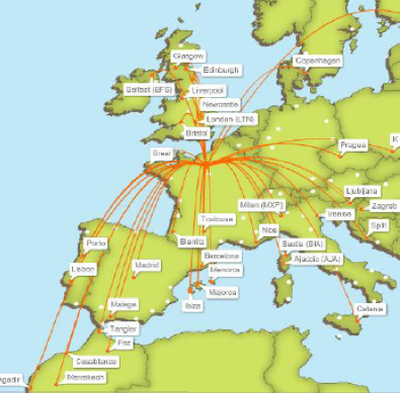 In Lisbon, easyJet is the second largest carrier with 3.4 million passengers p/a. The carrier stated Lisbon is a good inbound and outbound market. 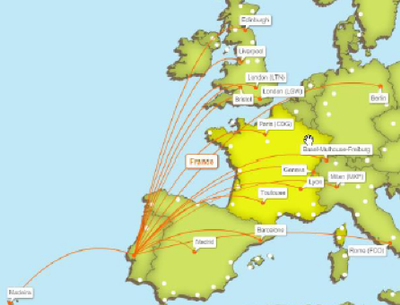 In achieving efficiencies over its network carrier competitors, easyJet noted that it benefits from its high asset utilisation (average of 11 hours a day), consistently industry leading load factors and focussed cost management efforts. In attempting to attract the business market, easyJet also noted that its OTP has improved with the carrier adjusting its crew rostering, adding firebreaks into the schedule and improving communication. 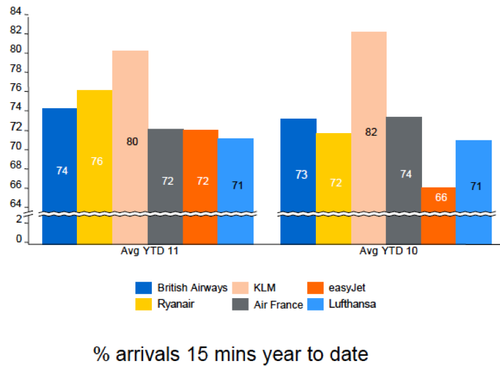 easyJet, meanwhile, has been assessing its routes with Ms McCall stating the carrier would be “brutal” about which routes work in terms of profitability and which do not. "You will see us being much more brutal about what routes work and what routes don't. We're going to be very, very tough about routes that aren't working," she said.

The airline recently announced it would pull out of the Helsinki market with the carrier cancelling services to Helsinki from London Gatwick, Manchester and Paris CDG.  In 2010, the UK – Helsinki market grew by 5.5% to 778,790 passengers following growth of 7.6% in 2009 due to the start of easyJet’s Gatwick service.

Meanwhile, Ms McCall stated fare increases are “inevitable” given higher oil prices. The price of jet fuel price has increased by 46% in past 12 months to USD1042/ton. easyJet warned that a USD10 movement in fuel price per metric tonne will impact its FY11 fuel bill by around USD4.8 million

Ms McCall added that carriers are also facing an “uncertain” consumer environment. However, revenue growth has recovered after a massive slump related to the snow period disruptions. 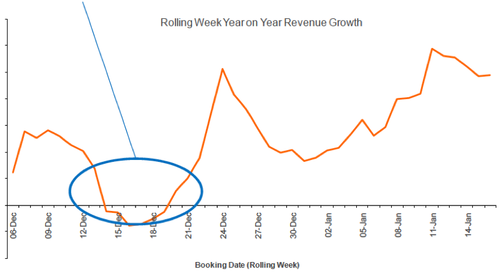 easyJet has slumped 26% in 2011 after stating on 20-Jan-2011 that its first half (six months to 31-Mar-2011) loss would likely double to between GBP140 million and GBP160 million compared to a pre-tax loss of GBP78.9 in the previous corresponding period, due to increasing fuel costs, an uncertain economic outlook and the impact of poor weather. easyJet however stated it remains “on track to be profitable again this year” adding that it has posted a first-half pretax loss for the last eight reporting periods while recovering to record a full-year profit.

The share performance, the worst on the seven-member Bloomberg EMEA Airlines Index, has reduced the carrier’s market value to GBP1.39 billion. Ryanair shares are down 13% to value the carrier at EUR4.86 billion while International Consolidated Airlines Group SA is worth GBP4.25 billion according to Bloomberg. 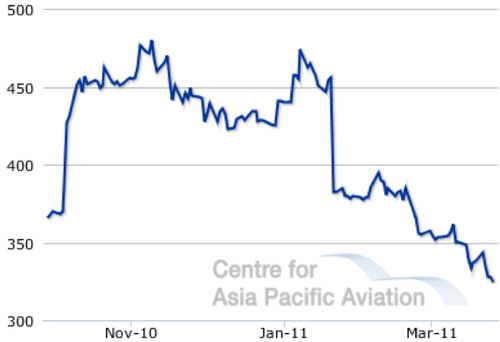