Airbus has announced it will seek “full financial compensation” from Rolls-Royce over the failure of a Trent 900 on an A380 and the engine swap-overs needed to remedy the problem. Airbus confirmed that the engine issue is affecting the A380 production line. Shares in EADS, Airbus’ parent, gained 0.8% yesterday, while Rolls-Royce shares dropped 0.5%.

Airbus also announced it has selected Goodrich Corporation to provide the main landing gear for the 1000 variant of the A350 XWB aircraft. The contract is expected to generate more than USD2 billion in original equipment and aftermarket revenue for Goodrich over the life of the programme.

Meanwhile, Air Lease Corp CEO, Steven Udvar-Hazy, stated he believes the B787 will be delayed a seventh time, due to the electrical fire on earlier in the month that forced the manufacturer to suspend the test-flight programme. Boeing also announced it signed an LoI with AerCap for 15 B737-800s. Boeing shares gained 3.4%, AerCap shares were up 2.4%.

Menzies shares continued to tumble, losing another 8.5% yesterday. The company share price has fallen more than 20% this week. 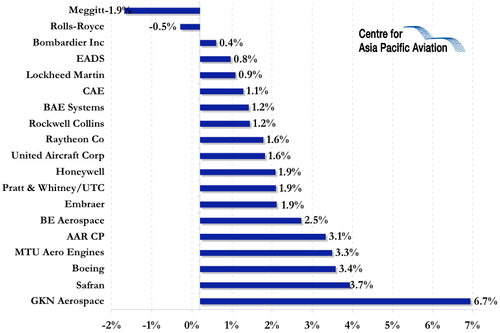 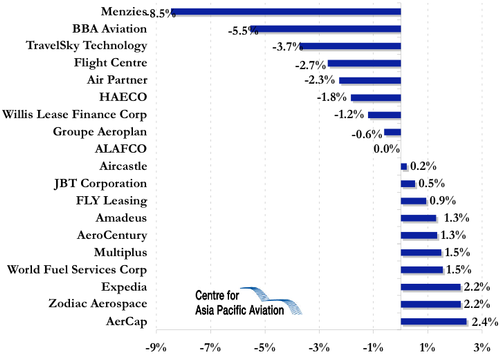