Shares in EADS rose 3.0% on Friday to EUR13.98 per share, after trading as low as EUR13.08 on Wednesday. The European aerospace manufacturer’s major subsidiary, Airbus, received a new order from Turkish Airlines last week and has been buoyed by news that the UK will invest GBP340 million to support the A350 XWB programme.

One manufacturer suffering significantly from cancellations in recent weeks is Canada’s Bombardier. Last week, the regional and business jet manufacturer terminated an order for 25 Learjet 60 XRs and 80 options (valued at up to USD1.5 billion) from Jet Republic, as the business jet operator wound up its operations. The cancelation follows a similar announcement made in early August, when Bombardier pulled My Way Airlines’ order for 15 CRJ1000 regional jets after Italian authorities revoked the carrier's license due to its uncertain financial position.

Bombardier’s major rival, Embraer, finished Friday up 1.5%, to gain 6.6% over the past week. Embraer received a minor shot in the arm last week when the US agreed to end its embargo on commercial aircraft sales in Venezuela, potentially clearing the way for the sale of 20 E190/195 regional jets.

Boeing was also up on Friday, gaining 2.5%. The manufacturer has 47 net orders for the year, after suffering six narrowbody cancellations last week. Boeing has lost a total of 89 orders this year through cancellations, 83 of them widebodies. 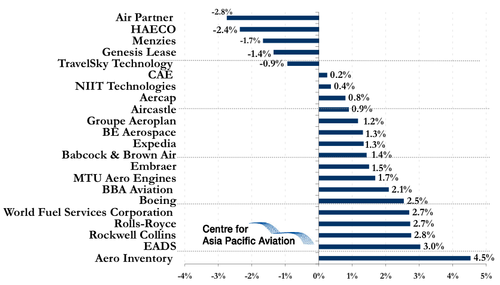