The on-again/off-again saga of the US aerial refueling tanker acquisition programme took another twist, with EADS confirming yesterday that it will bid for the programme by the revised Jul-2010 deadline. EADS is currently in talks with a potential US partner for the bid, seen as an essential requirement if it is to have any chance in the competition.

EADS’ former US partner, Northrup Grumman, pulled out of the programme in Mar-2010, over what it claimed were initial terms that biased the competition in favour of Boeing’s entry. However, EADS has been reluctant to withdraw from the competition and pass the USD35-40 billion contract to Boeing.

EADS is eager to increase its presence in the US, the world’s largest defence market. European governments have supported the drive, with representatives from Germany, France and the UK expressing their dismay at the procurement process and the competitive implications. Boeing has been the dominant supplier for US aerial refueling aircraft since the 1950s.

Elsewhere in the aerospace sector, Bombardier has made it clear that it has significant ambitions in India over the next decade. The company opened a new regional support office in Mumbai on 20-Apr-2010 to support forecasts sales of 250 business jets and 500-600 commercial aircraft in India over the next ten years.

Bombardier India President, James Hoblyn, stated the manufacturer’s products, particularly its new CSeries, are "perfect" for the Indian market, which is growing rapidly domestically and internationally. 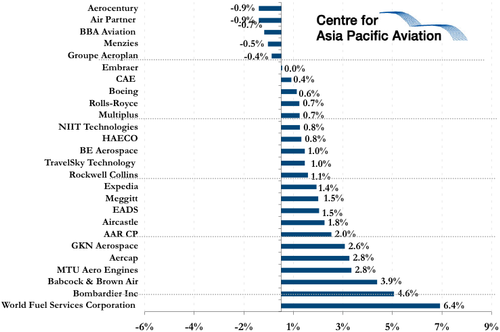