It was 15 years ago that a second runway was approved for Ireland’s Dublin Airport, the main gateway into and out the country and hub for trans Atlantic travel; but it only opened at the end of Aug-2022. The runway will help the local economy by facilitating tourism, but its main job is to attract long haul airlines, mainly on non-trans Atlantic routes, both passenger and freight.

Paying for it will mean airline charges increasing, but not until 2026. Before then charges are to be capped, and will only increase contingent on operator, daa, providing more modern infrastructure.

It seems that a third terminal, an announcement on which was delayed by an election and then the COVID-19 pandemic, may be needed sooner than was expected. Meanwhile, a light rail project running north-south through Dublin, with an airport station, has been approved.

Collectively, these projects should help Dublin retain its cachet as a principal west European gateway, punching well above the weight of the small nation it represents.

Dublin Airport, the principal gateway into Ireland, both Eire and Northern Ireland, completed its EUR320 million North Runway construction project in Aug-2022, on schedule and on budget.

The project has been part of the airport's long term strategic planning and land use prioritisation since the 1960s, but has had numerous hurdles to cross.

The runway will facilitate larger aircraft and connectivity with long haul destinations, as well as extra runway slot capacity for short haul services.

Dublin Airport Authority (daa) CEO Dalton Philips stated: "The delivery of this once-in-a-generation piece of vital national infrastructure [positions] Ireland for economic growth for many decades to come. The addition of [the] north runway will further enhance the role of Dublin Airport as a vital economic enabler for Irish tourism, trade and foreign direct investment".

Ryanair was the first airline to use the new runway

Its addition means that Dublin is one of only six commercial airports across the United Kingdom and Ireland with more than one runway, along with London Heathrow, Manchester, Edinburgh and Glasgow Prestwick. Coincidentally, Belfast International, which several years ago lost traffic to Dublin as it grew rapidly, also has two runways but their 90-degree alignment means that dual use is rare (as the wind usually blows in only one direction!)

The North Runway fulfils a key mandate set by the Irish Government’s National Aviation Policy, by enabling Dublin Airport to develop as an international hub for leading airlines and enhancing connectivity of Ireland’s island economy for the benefit of consumers, tourism and foreign direct investment.

As of the week commencing 29-Aug-2022, more than two thirds of seat capacity at Dublin was on flights of up to four hours in length, and 44.5% of them were on Ryanair, which is renowned for its aircraft utilisation – six rotations each day for a based aircraft being standard practice, and more if possible.

Thus, it performs two roles that are essential for the economic wellbeing of a small nation on the western periphery of Europe: enhancing access and egress for commerce, and supporting west/east hub operations that can be plugged into demand from a range of primary and secondary level cites in support of the national carrier, Aer Lingus.

Aer Lingus’ existing Dublin route map (below) is already quite comprehensive – and despite the impact of the COVID-19 pandemic.

The airline serves 11 destinations in North America and no less than 15 in the UK alone, most of them with a Dublin connection, facilitating hundreds of trans Atlantic city pairs. 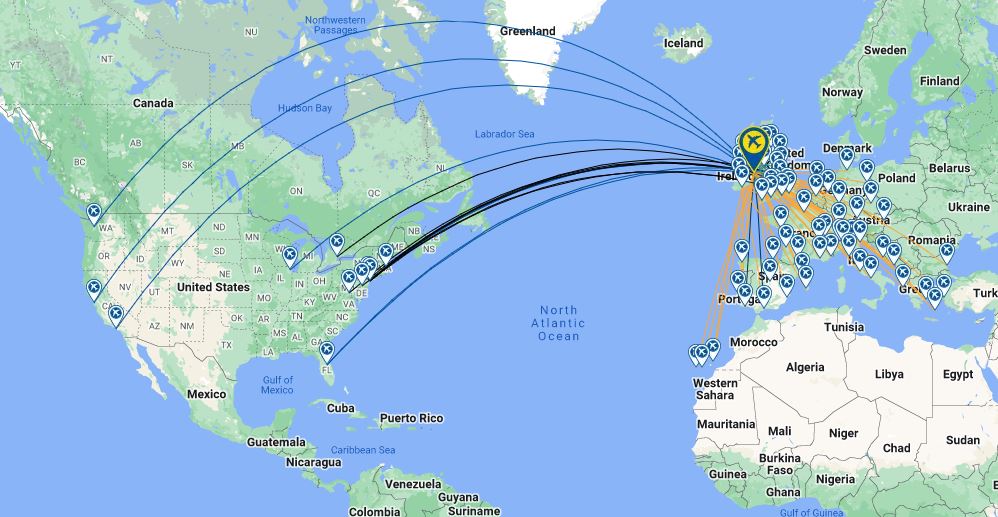 Comparing the two capitals, that means that Dublin has 38% of the number of destinations that London has – for a national population that is 7.5% of that of the UK, and where the population of Dublin is 13.2% that of London.

The airport’s route map is skewed towards the west

There is a distinct imbalance in the airport’s route map, with only four destinations to the east beyond Turkey and Cyprus (Cairo and the Middle East Big 3 destinations of Dubai, Doha and Abu Dhabi), meaning that there are none at all in Asia, in Latin America and the Caribbean, and in sub-Saharan Africa.

The chart below, of departing seats by region, emphasises that imbalance, which is hugely in favour of Europe, followed by North America: two regions for which there is a great deal of existing competing connectivity already.

Hence, it is more likely that marketing activity surrounding the runway will be directed at potential destinations to the east.

The runway was designed to be compliant with European Aviation Safety Agency (EASA) standards to ensure that Dublin Airport can operate as a Category IIIB runway, capable of servicing larger, typically long haul, aircraft, up to and including Code F types (wingspans 65m to 80m), including Boeing 747-8 and Airbus A 380-800 aircraft.

The future for both types, neither of which had flown when the runway was first envisaged, is not promising, but the aviation industry is known for pulling surprises, and there is no knowing what developments might take place during the life of this one.

The daa was quick to point out that relevant environmental considerations had been taken into account in the design and provision of the runway.

It anticipates that ‘Next Gen’ aircraft will make up the bulk of the types that use it, which is a totally different state of affairs from as recently as 20 years ago when Ryanair was growing quickly but still using mainly the noisy and inefficient Boeing 737-200 Classic equipment on its routes out of Dublin.

And that seems to have influenced Fingal County Council, the responsible local authority which oversees the area within which the airport is located.

The council recently decided to amend and replace two conditions associated with the planning permission for the North Runway, permitting its limited extended use at key late-evening and early-morning busy periods, and also including a generous insulation grant scheme for eligible local residential properties.

It also provides for the replacement of a nighttime aircraft movement cap with a more considered noise management quota system that encourages the use of quieter aircraft. This will be complemented by further noise mitigation and enhanced monitoring measures.

The planning decision helps provide the operational flexibility required by Dublin Airport to enable the regrowth and development of international connectivity.

The Freight Transport Association of Ireland (FTAI) has welcomed the opening of the runway, labelling the project as "an opportunity to enhance Ireland's global connectivity and trade opportunities, and provide a boost for the Irish economy".

Again, the runway presents opportunities for new markets, either by way of cargo carried in the belly hold of new long haul services or freight-only services with Dublin as an intermediate stop.

The FTAI also warned, though, of the “challenges” the runway will provide for express freight integrated services (the operators include DHL, FedEx and UPS), as well as the impact of Airport Noise Competent Authority (ANCA) recommendations, which will replace the numerical cap on the number of flights permitted between certain hours with an annual noise quota.

FTAI argues that following the changes to the way in which night flights are operated at the airport, it is crucial that express freight services are still prioritised for time slots.

The rationale is that the opening of the new runway has blocked the direct access to terminals and support services, as the West Apron Surface Crossing has been closed.

FTAI therefore calls on Dublin Airport Authority to expedite the development of a promised underpass and review the necessary standard of support services.

In part two of this report CAPA will explore: daa (the operator’s) finances are improving; the new runway was the principal daa investment in 2021; Irish Aviation Commission promises rise in charges cap if Dublin delivers on its capital investment programme; a sidelined third terminal is still on the cards but may need to be brought forward; Dublin’s charges seem reasonable compared with those of its peers in the UK; MetroLink light rail project gets Cabinet approval; and Dublin cements its position as a key west European gateway, but more infrastructure still needed.