Airline traffic growth in India remained in double digits in Nov-2010 for two consecutive Novembers of strong traffic growth with passenger numbers now well above pre-recession levels. Passenger traffic increased 25.1% in the month following four months of growth under 20%. Despite a steep increase in airfares in the month, the seven domestic airlines reported the highest carriage of passengers during a single month of the current calendar year.

Growth has averaged above 19% in the 11 months to Nov-2010, with December still to come, and which is traditionally the busiest month of the year.

Indian aviation, which entered negative territory earlier than other Asian nations and the rest of the world, has also been one of the quickest to recover, with domestic traffic now some 62% above Nov-2008 levels, 27% above Nov-2007 levels and around 66% above Nov-2006 levels.

According to the Indian Ministry of Civil Aviation overall domestic passenger numbers in India increased 25% year-on-year to 4.9 million in Nov-2010 to reach the highest monthly level so far in the 2010 calendar year. Passenger numbers did not exceed 4.0 million in any month of 2009. Every carrier in the domestic market reported growth in Nov-2010.

The most dramatic growth was, as is generally the case, witnessed by the LCCs, driven by GoAir with a 64% year-on-year increase to 337,000. Other LCCs, including India’s largest LCC, IndiGo (+53%) and SpiceJet (+36% to 650,000) also continued their rapid traffic expansion. Together, IndiGo, GoAir and SpiceJet accounted for 38% of the domestic market up from 32% in Nov-2009. 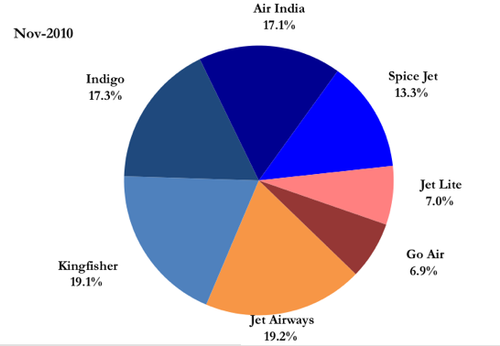 As a whole, Indian carriers have generally been careful in adding capacity back into the market, with capacity growth of about 10% expected for the full year across the industry. For the next financial year capacity growth is expected to be 12-13%. This capacity management has provided a much-needed boost to load factor and yield levels, which will in turn have a flow-on effect into profitability in 4Q2010. 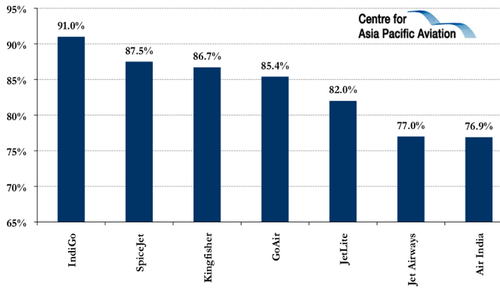 Airlines in India have now well and truly emerged from the global slump that has been affecting the industry. And, with the holiday season in full swing, full service and LCCs are seeing heavy demand with airfares, as a result, rising strongly, to the concern of consumers and the government.

Mr Praful Patel, Minister for Civil Aviation, expressed concern over “exorbitant” fares recently charged by airlines, stating the aviation industry should keep in mind that the phenomenal growth in the sector has been due to the low fares offered earlier. He added: “For five years, the aviation sector has grown on the back of low fares. We can’t ignore this fact. The benefits of low fares have gone to the travelling public." He has previously stated that the government “cannot be a mute spectator” to the “exorbitant” spot or last-minute fares that were charged by carriers in Nov-2010 and Dec-2010.

The traffic outlook for India’s carriers remains optimistic for the remainder of the peak festival and holiday season with full-year growth expected to be in the 18-20% range, led by LCCs which continue to expand their share of the market. This trend is expected to continue into 2011, with expansion by LCCs in both the domestic and international market.

India’s airlines have also done well in managing capacity, ensuring that load factors and yield improvements continue although recent fare transparency regulations by DGCA could have a slight impact on this. The nation’s aviation industry has also benefitted in its brisk recovery due to higher disposable incomes and increased demand for business travel.