Airline traffic growth in India remained in the double digits in Oct-2010 for a second consecutive Octobers of traffic growth with traffic now rebounding to well above pre-recession levels. Growth has averaged above 18.5% in the year-to-date, due to higher disposable incomes that have driven passenger growth and increased demand for business travel. This pick up in corporate travel has also had a positive effect on yields and hence overall profitability.

Indian aviation, which entered negative territory earlier than other Asian nations and the rest of the world, has also been one of the quickest to recover, with domestic traffic now some 47% above Oct-2008 levels, 28% above Oct-2007 levels and around 64% above Oct-2006 levels.

On a month-on-month basis, passenger numbers were up strongly in Oct-2010, after four months of month-on-month declines and following record highs in mid 2010.

According to the Indian Ministry of Civil Aviation overall domestic passenger numbers in India increased 16.3% year-on-year to 4.6 million in Oct-2010. Every carrier in the domestic market witnessed growth in the month.

Vijay Mallya-promoted Kingfisher remained the largest stand-alone carrier (by domestic passenger numbers) handling 877,000 passengers - a 6.6% year-on-year increase, the lowest rate of growth in the month among the domestic carriers. 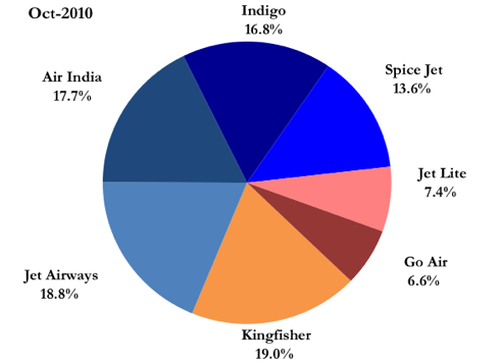 Kingfisher, which reported the slowest passenger growth, reported the highest load factor in the market at 87.1% as the carrier focuses on load factor, revenue and yield enhancement achieved by reducing and maintaining discipline with respect to new services. Kingfisher’s domestic load factor was 1 ppt above IndiGo’s, and was a massive 13.5 ppts higher than Jet Airways and 16.3 ppts above Air India, which were the weakest among the domestic carriers. 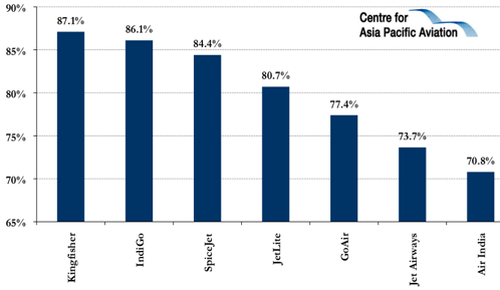 As a whole, Indian carriers have generally been careful in adding capacity back into the market, with single-digit capacity anticipated for the full year across the industry, with this likely to increase to double-digit growth in the future. This capacity management has provided a much-needed boost to load factor and yield levels, which will in turn have a flow-on effect into profitability.

The DGCA introduced new compensation rules on 15-Aug-2010 outlining that passengers are entitled to INR2000 (USD45) as compensation in case of a two-hour delay and INR4000 (USD90) for four-hour delays. Passengers must be informed at least three hours in advance about cancelled services with the airline required to refund passengers if this notice is not provided. Airlines are exempted from giving compensation in case of political instability, natural disaster, civil war, insurrection or riot, flood, explosion, government regulation or order affecting the aircraft, meteorological conditions, security risks, strike, labour problems and ATC-related delays.

The Ministry also released the reported number of passengers affected by cases of denied boarding, cancellations and delays of more than two hours by Indian airlines in Oct-2010. Further details include:

Meanwhile, the DGCA has reportedly issued notices to all airline CEOs requesting an explanation as to why passengers have been charged excessive fares after a probe by the regulator showed that domestic airfares from 15-Nov-2010 have been “substantially higher” than in previous weeks.

The increases coincide with the peak demand period in India with the DGCA requesting a copy of fares on individual routes and fare categories across the carriers’ networks on the first day of every month. The DGCA circular added that any "significant and noticeable change" in the established tariff already filed, should be reported to DGCA "within 24 hours of effecting such changes". The fares will also be published by the carriers on their websites and/or in daily newspapers.

The traffic outlook for India’s carriers remains optimistic for the remainder of the peak festival and holiday season with full-year growth expected to be in the 15-20% range, led by LCCs which continue to expand their share of the market. This trend is expected to continue into 2011, with expansion by LCCs in the domestic and international market. India’s airlines have also done well in managing capacity, ensuring that load factors and yield improvements continue although recent fare transparency regulations by DGCA could have a slight impact on this.