Two years after Delta Air Lines made an unprecedented move to control its largest input cost by purchasing an oil refinery, no definitive conclusions can be drawn about the success of the endeavour. Ironically however, according to one analyst, Delta's investment has had sizeable benefits for its competitors; by using its own facility, Delta has reduced consumption in the open market, causing prices to fall.

Production at the airline’s Trainer refinery has had fits and starts, and Delta has acknowledged that the learning curve in running a refinery was greater than its initial expectations.

But viewed through the lens of helping Delta improve its fuel cost management, Trainer is for the moment making a positive contribution to the airline’s fuel strategy. However, is it only one element in Delta’s fuel cost mitigation scheme, and much road lies ahead in effectively managing Trainer to deliver consistent returns.

Shortly after Delta restarted production at the Trainer refinery located just outside of Philadelphia, Pennsylvania in late 2012 super storm Sandy struck the US east coast, disrupting operations at the facility.

Delta spent much of 2013 attempting to restore Trainer’s production to full capacity, and airline president Ed Bastian in Mar-2013 declared that running an oil refinery was much like running an airline. “It is not for the faint of heart,” he stated.

Part of the effort in restoring Trainer to full production capacity was the effort to source cheaper US domestic crude oil to refine rather than generally higher priced Brent crude produced in the North Sea.

In Dec-2013, Delta stated that it had contracts in place to supply approximately 70,000 barrels per day of domestic crude mainly from the Bakken formation in North Dakota but also from Eagle Ford in South Texas and the Permian Basin located in Texas and New Mexico. At that time Trainer’s daily output was roughly 185,000 barrels.

Delta was bullish on the prospects for Bakken, noting that the large amounts of crude available in the US would end up priced more in line with West Texas Intermediate crude (WTI). The US Energy Information Administration estimated that in CY2013, the WTI discount to Brent averaged USD11/bbl, and forecasts a discount of USD8/bbl in CY2014 and USD9/bbl in CY2015.

Throughout most of CY2013, WTI and Bakken prices were in line, underlying Delta’s efforts to increase its US-sourced crude for Trainer.

Delta recorded a USD13 million profit from Trainer during 2Q2014, a USD64 million improvement year-on-year and a reversal of the USD41 million loss at the facility in 1Q2014.

The airline explained that during 1Q2014 one of Trainer’s refining units was taken off-line for scheduled modifications, which slowed throughput. The refinery’s performance was also affected by an increase in Renewable Identification Numbers (RIN) expense. RIN costs are part of compliance with the US Environmental Protection agency’s renewable fuel standards, and Delta has previously cited RIN price volatility as a challenge in Trainer’s performance.

At the end of Jun-2014 Delta touted its efforts to source domestic crude have resulted in lower cost at Trainer as more than 40% of the refinery’s inputs during 2Q2014 was acquired from domestic sources compared with 5% the year prior.

Delta also stated that it expects to meet its target of refining 70,000 barrels per day of domestic crude at Trainer in 2014. As for the facility’s financial performance, Delta forecasts a break-even performance for 3Q2014, and has previously said the refinery would turn a profit in CY2014 after recording losses of USD116 million in CY2013.

After it first announced the Trainer acquisition, Delta estimated that the facility would support roughly 80% of its US domestic jet fuel needs and reduce its fuel costs by USD300 million annually. With its very high average age fleet, Delta's fuel consumption per ASM is considerably higher than most, so reducing fuel input costs is an important part of its fleet strategy.

Delta’s top-line fuel costs for CY2013 fell by 7%, or USD753 million, to USD9.4 billion. But it is tough to gauge how much (if any) is attributable to Trainer given the production challenges the facility faced throughout much of that year and the overall loss recorded at Trainer in CY2013.

The airline believes the results from Trainer combined with its fuel hedging initiatives should result in a fuel cost per gallon in the range of USD2.88 to USD2.93 for 3Q2014, and has previously estimated that its hedging programme should generate USD300 million in benefit in CY2014. 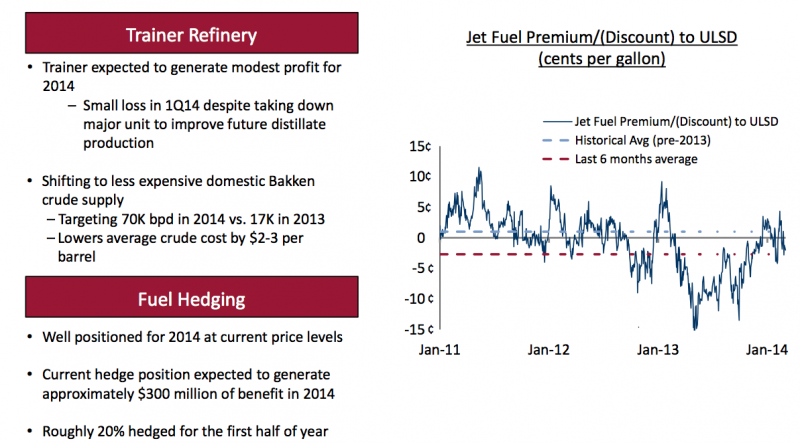 One of the main driver’s in Delta’s decision to purchase the Trainer refinery was to gain some control over the cost of refining crude into jet fuel, which is referred to as the crack spread.

In 2012 Delta estimated that the cost of crude per available seat mile increased 10% since 2009, but refining costs jumped 73%. At the time Delta concluded that crack spread risks could not be effectively hedged in a cost efficient manner.

Even as crack spreads have retreated from high levels recorded in 2011 and 2012, ranging from USD6 to USD12 per barrel range in 2014 according to Fitch ratings, the spreads still remain high relative to historical levels, the agency concluded.

Delta CFO Paul Jacobson recently explained that distillate crack spreads (the gap between crude and refined prices) have been “hit hard this year [2014], which is actually the great thing for Delta because we are exposed to 95 million barrels a year on distillate cracks at the airline. So when crack spreads decline and we see that performance at a break-even level, particularly with relatively strong gas cracks from time to time, then we are actually pretty happy from that result”.

When Delta purchased Trainer in 2012 the airline had a stated goal of gasoline representing 43% of the refinery’s output, 32% for jet fuel, 18% diesel and 7% of other fuel types.

“The important thing for our strategy,” said Mr Jacobson, “is to lower the overall input cost for the plant [Trainer] through domestic crude, so we can help to create that cushion in a low distillate crack environment where we can make a little bit of money at the refinery, while also enjoying the full benefits of lower crack spreads at the airline.”

Now that Trainer has reached some level of predictability from a production standpoint, perhaps its contribution to Delta’s fuel cost management may become easier to predict.

Delta’s rhetoric about Trainer has certainly been tempered during the last two years as the reality of managing the complexities of an oil refinery set in. It is also too early to declare Delta’s gamble a success since as Delta is coy about how much it has invested in Trainer beyond the initial USD250 million, and when a proper return on that investment will be generated.

Further investment will probably be needed as Delta transitions to domestic crudes away from the Brent/West African crudes the refinery traditionally runs on. And the airline has been talking about building a 65,000 bpd pipeline to a rail terminal so as to avoid carrying crude to Trainer by barge (which is more costly) and also has chartered a tanker for two years, reportedly at a cost of around USD80,000 a day.

However, if Trainer is simply a tool in Delta’s arsenal to manage fuel cost volatility better, then the facility’s results in 2Q2014 are an encouraging sign - but far from a sustainable trend. Delta’s favourable fuel cost performance in 2014 is driven by a number of factors including more favourable fuel prices and benefits derived from its fuel hedge portfolio.

Delta seems as if it is sitting at the mid-point of the learning curve with Trainer, so it is difficult to draw any major conclusions about its approach to running a refinery until it reaches its domestic sourcing goals.

If Trainer can consistently achieve a break-even performance while delivering some relief to Delta’s fuel costs, then some critics of the Trainer acquisition could be silenced. The key lies in executing Trainer’s goals effectively, something Delta needs to deliver on a more frequent basis.

Meanwhile, as Airchive.com's Vinay Bhaskara has suggested, by relying more on fuel from its own refinery Delta has provoked a fall in the open market crack spread of about six points, delivering a substantial boost to Delta's major competitors, who are able to buy more cheaply as a result. Other factors around New York have recently driven the spread higher, but the trend impact is a positive one for all concerned.