Delta-Virgin Blue and global alliances. Joint venture is found to have public benefits

Global airline alliances are very much under the microscope at present. The European Commission and the US DoT are each specifically reviewing the oneworld British Airway-American Airlines-Iberia application for antitrust immunity. The broader issue is also arising in the context of US-Europe bilateral discussions, and, in tandem, the influential US Rep.James Oberstar is meanwhile attacking alliances head-on, largely in response to narrow – even misdirected nationalistic - political pressures.

On thing competition and anti-trust authorities around the world are agreed upon is that, when it comes to global industries like the airline business, the different national jurisdictions should ideally adopt similar approaches. This is very much in the interests of expanding international trade, for example by providing some certainty of process and consistency wherever airlines operate.

Consequently, these bodies tend to talk a lot between themselves, trying to establish common principles. Despite having different national legislation (although even there, harmonisation is gradually appearing), which means different criteria for determining specific cases on their merits, there is a general drift to consensus – at least at the authority level. Politically, things can be quite different, as this ancient industry drags its political baggage out of the warehouse.

To be specific, that means an industry that has rarely in the past 50 years returned its cost of capital, where one single LCC can have a capitalisation that exceeds the collective value of the major full service airlines in the US; where almost all of them have been through Chapter 11 bankruptcy in the past decade – or threaten to go into it; where the global airline industry will lose USD11 billion this year; where merger in all but a few special cases is virtually impossible, because nationalistic ownership rules prevent it; and yet, where governments still rush to bail out their national airlines, such as Air Canada, Air India, Aerolineas Argentinas, Japan Airlines (and numerous others who are subsidised or protected from competition in various ways) when market forces suggest they should disappear.

This is the system we need to protect from change?

A step in the direction of commonsense: Delta-Virgin Blue

In fact, there are at least two things that need to change: first, merger and consolidation is essential to deliver some rationalism into the market; and secondly, so long as that is not possible, thanks to those ugly and counter-productive nationalistic anti-ownership rules, much greater commonsense needs to be applied to permitting the “poor-man’s–mergers”- global alliances.

Last week, Australia’s competition authority, the Competition and Consumer Commission (ACCC) took what looks to be an eminently sensible decision when it tentatively approved Delta and Virgin Blue’s filing for immunity to coordinate their services on US-Australia and behind gateway routes for a period of three years. The “Draft Determination” is now open for comment prior to the grant of formal approval. US authorities are yet to issue a finding.

Importantly, the Commission also had some observations on the value of alliances that should have general validity. And, given the high level of worldwide communication among competition authorities, the approach taken is not likely to be greatly out of step with thinking in other jurisdictions. That said, public interest tests vary under different national legislation, so there can be no assumption that other decisions will mirror the ACCC’s decision.

Delta and Virgin Blue Group (whose V Australia subsidiary operates between the US and Australia) filed in July for anti-trust immunity for a passenger and cargo joint venture which involves “coordination and agreement between Virgin Blue and Delta on flights between Australia and the United States (trans-Pacific routes) in relation to a range of issues including pricing and revenue management; schedules, capacity and routes flown; and passenger sales and marketing activities.” [1]

The decision is set against a background where Australia’s Qantas still holds a dominant position in the market, following several years of duopoly with United Airlines, when premium fares were generally the highest in the world for comparable markets. However, earlier this year, both V Australia[2] and Delta entered the market almost simultaneously. The resultant near-doubling of capacity coincided with a massive downturn in premium demand in the US and led to very substantial price discounting, notably in the economy cabin.

For example, the Commission’s finding accepted, “as a general principle, the applicants’ claim that an integrated alliance can create financial incentives for alliance partners to optimise their joint network offering such that it is more attractive to potential customers. The ACCC considers that such arrangements are likely to result in a public benefit where they enable the alliance partners to compete more effectively.”

Then, in the specific details of the proposed Delta-Virgin arrangement, there were grounds for optimism that approval would generate more consumer benefits than would otherwise be the case.

Full details were commercially confidential, but the Commission noted that approval of the JV would “result in the creation of new online service connections in more than 6500 city-pairs” – whereas, in the absence of immunity, “reciprocal codeshare services…will be limited to a much smaller number of cities.”

“In light of this”, continued the ACCC, “the Joint Venture is likely to result in some public benefit by providing consumers with greater network opportunities than under the applicants’ existing cooperation agreements.”

This alternative scenario places the options clearly in contrast. The different behaviour likely under an approved JV regime, compared with a standard commercial agreement, was likely to favour consumers.

There was another perceived benefit for the consumer too: with immunity, “both parties will have an incentive to route passengers via the most direct trans-Pacific routes irrespective of which airline is the operator of the route.” Thus, for example, the Commission said, “a passenger flying from Los Angeles to Brisbane on Delta under a limited codeshare would be routed through Sydney to maximise Delta’s revenue, while the Joint Venture would incentivise Delta to put the passenger on V Australia’s direct service to Brisbane.”

The Commission then believed that this would propel the virtuous circle, where improving the product stimulates greater traffic flows, bringing with it the likelihood of expanded services: “by providing consumers with more efficient routings. The ACCC also considers that this may facilitate improved loads for the applicants which in turn may create opportunities for expanding the direct trans- Pacific services offered.”

With these positive noises about the likely prospect of a better consumer outcome if immunity were granted, the Commission then turned to the issue of potentially reduced competition and price competition, once the carriers were allowed to cooperate.

Virgin Blue gets time-on for past good behaviour

An important – and relatively unusual – criterion which tipped the balance in favour of granting the draft approval was that one of the airlines in the transaction has consistently shown itself to be a “vigorous” and “innovative” competitor.

Having assessed the merits of the route improvement and consumer benefit potential under the proposed JV, the ACCC found however that there was “limited empirical information” upon which to make an informed judgment about what would happen in the marketplace. “The extent to which the public benefits in this matter are realised depends on the conduct of the applicants under the Joint Venture,” it noted.

In the absence of clear evidence, several features were considered important. The first was that the Commission could review the approval at any time if behaviour did not meet the expected standards – and that this would anyway be a central factor when it came to renewing the approval after the initial period.

Meanwhile though, Virgin Blue was to be given the benefit of the doubt. This was because “the information available suggests that Virgin Blue is a vigorous and effective competitor in this market, both in terms of price as well as innovation.”

However, where the “barriers to entry and expansion on the trans-Pacific routes are high, …the important question to be answered therefore is whether or not V Australia will continue[3] to be a vigorous and effective competitor in the market when operating in tandem with Delta under the Joint Venture…. especially when V Australia’s partner is a traditional full service airline.”

But there was even a positive spin for Delta: even “network airlines in the US have shown a preparedness to adapt their operations as a result of strong competition from low cost carriers in their domestic market.” And, comfortingly, “the history of Virgin Blue, and more recently V Australia, suggests that it is unlikely that V Australia would depart substantially from its current operating model.”

The Commission performed a brief analysis of pricing behaviour, illustrating the competitive levels of V Australia’s and Delta’s premium fares over coming months. The source was primarily the online booking site, Webjet.[4]

The differences in fare levels reflects the fact that Qantas is consistently able to command significantly higher fares due to the strength of its corporate relationships and a powerful loyalty programme (although the Australian holiday season in Jan-2010 sees very little business activity, suggesting some very cheap last minute premium fares). Air New Zealand also provides one-stop service to Los Angeles, but its business class fare tend to exceed AUD7,000 – so was not among the “cheapest other”. 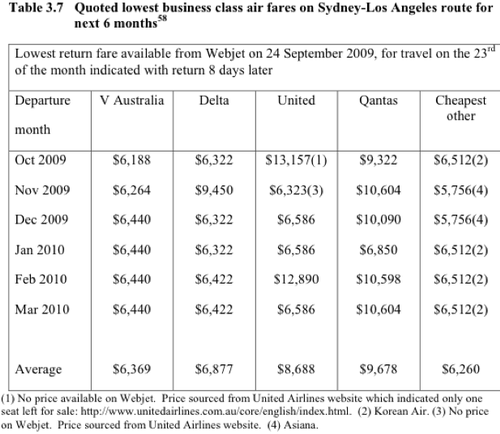 Will United remain on the route?

Much of the backdrop to the Commission’s finding is that Qantas has been a dominant player, able to exercise extreme pricing power, a situation that was important to address. But there is also an implicit assumption in the draft decision that long term competitor, United Airlines, will remain an active competitor – and that has been the case so far. But Delta has only been on the route since 1-Jul-2009.

As UA’s domestic network is strongest out of San Francisco, and it is the Los Angeles gateway that is being most affected by the new entry, there is an argument that United might withdraw from the LA-Sydney city pair. Los Angeles however offers the higher yields, with a stronger business market, so that is far from a straightforward move.

Meanwhile, United continues to maintain that it will resist efforts to push it out, relying on its longevity in the market to support its traffic base. UA gained access to the South Pacific routes when it bought them in 1986 from Pan Am, which in turn had begun operating to Australia and New Zealand in 1940.

In the words of the Commission, “on the basis of currently available information, the ACCC considers that it is unlikely that the Joint Venture will result in any significant diminution of competition in the respective markets for international passenger transport for (i) trans-pacific leisure travellers; and (ii) business travellers on the Sydney – Los Angeles route:

On balance, the ACCC considers the public benefit that is likely to result from the conduct is likely to outweigh the public detriment. The ACCC is therefore satisfied that the relevant statutory tests are met for authorisation to be granted.”

There will always be specific facts that differentiate this set of circumstances from other market conditions. But the Commission’s findings are at least a welcome step in the direction of assisting, even in a small way, towards industry rationalisation – and in strengthening competition at the same time.

[2] V Australia is a subsidiary of Virgin Blue Group; Virgin Blue operates domestic service in Australia. The Virgin brand may not be used on international services without the permission of Singapore Airlines, which owns 49% of Virgin Atlantic.