Delta, US Airways, United hit hard as General Motors off into the sunset. All airlines down

Delta (-11.0%; see below), US Airways (-10.4%; see below) each had double digit percentage falls, while United Airlines lost 7.7% of its value. All airlines across the Americas were down on the day yesterday, a stark contrast with airline stocks in Asia and Europe earlier in the day. The impending threat of Chapter 11 bankruptcy of General Motors – whose share price fell 20%, dragging down the Dow Jones index – dispelled some of the previous day’s euphoria over apparently improved consumer sentiment. 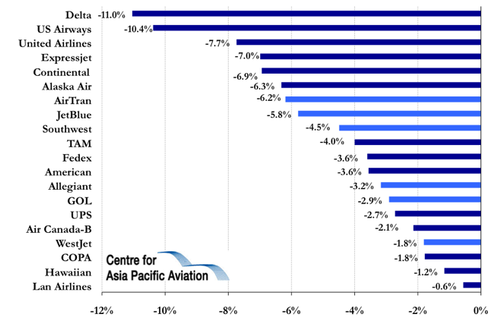 Delta’s stock price fall came with the carrier’s announcement that it would backtrack on introducing a second bag charge on all international routes, after other major competitors declined to follow suit. Now, instead of applying to all international services, it will only be applied on the North Atlantic. Delta is the subject of a planned class action by some Atlanta residents, alleging that the carrier publicly conspired with local Atlanta competitor, AirTran, over the level – or not – of a local baggage charge.

US Airways announced in a filing with the SEC on Tuesday 26-May-09 that it would eek shareholder approval to double its registered capital to 400 million shares. According to the filing, “The Board of Directors believes the proposal is advisable and in our best interests and unanimously recommends that the stockholders vote “FOR” the approval of the amendment to US Airways Group’s amended and restated certificate of incorporation to increase the number of authorized shares of common stock from 200,000,000 to 400,000,000 shares. The meeting is to be held on 10-Jun-09.

According to the company, the intention is not to use the power immediately, but to have the option to use it if and as the need arises. This was however enough to provoke concern among shareholders that a further dilution in value would occur.