The Wall St casino was at its most unpredictable on Friday, clearly grasping at every suggestion that might point to a positive future. On this occasion the suggestion seems to have been based on a belief that things are looking so bad that they surely can't get worse.

But any early blossoms may well be nipped in the bud later this week as cold reality returns.

After starting the day down thanks to awful unemployment figures, the Dow Jones index kicked sharply up by 260 points to close 3.1% up. Like a punch drunk boxer, investors seem to have become immune to bad news, looking for a much hoped for turnaround in the market.

A combination of anticipated government support for the auto industry (which - who knows! - might just overflow into the airline sector) and a growing belief that the corner has been turned gave a massive boost to the leading airlines. Lower oil prices also contributed to the general sentiment - despite ominous rumblings from OPEC about reduced production to be agreed at its 17-Dec-08 meeting.

Monday morning may see some sore heads after the buying binge. 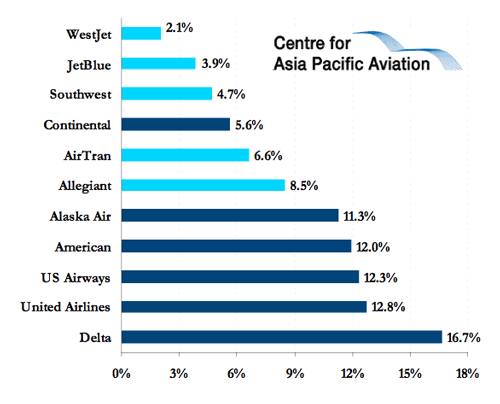