It was a very good day out for the struggling US major airlines on the Wall Street Casino yesterday. Delta Air Lines, Continental Airlines, US Airways, American Airlines and United Airlines soared 19.1%, 17.0%, 16.8%, 14.2% and 13.0%, respectively, as Delta and United lost (only!) a combined USD1.2 billion in the first quarter.

Net losses at Delta and United of USD794 million and USD382 million, respectively, were better than market expectations for the quarter. More importantly, no-one seems to think things will improve any time soon.

Revenues down sharply: Revenues slipped by 15% and 22% at Delta and United, while unit passenger revenues (PRASM) plunged 12.1% and 11.1%, respectively.  United’s PRASM fall was at the top end of the guidance range provided in March-2009.

Relieved investors, but are they clutching at straws?

Investors appear to be betting the ugly first quarter will be the low point, seizing on bullish comments by Delta CEO, Richard Anderson, that the company had seen “some signs of stabilisation, as the revenue environments appear to have bottomed out”. United’s Glenn Tilton stated the UAL leadership team is “making the right decisions and United’s people are delivering solid results” with a focus on “fundamental improvement”.

But Mr Anderson added, “it’s still a bit early to call, and we expect to face significant headwinds throughout 2009”.  With several US carriers still yet to report their first quarter results, the upside case is weak at best and carrier stocks could quickly fall back to earth again. Southwest CEO, Gary Kelly, for example, is "not ready to call the bottom just yet". 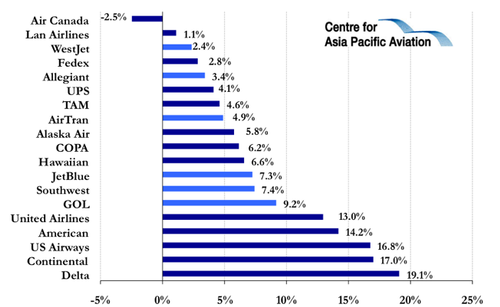