Delta Air Lines officially launched its shuttle product between Los Angeles and San Francisco on 3-Sep-2013, initiating an interesting experiment in one of the most competitive markets in the US. It caps off recent expansion by both Delta and American from Los Angeles as both carriers work to refine their strategy in the highly fragmented market.

The replication of Delta’s US east coast shuttle service on the west coast intensifies growing competition among US major, hybrid and in some cases low-cost carriers to garner a higher share of premium higher-yielding passengers, evidenced by the recent spate of plans tabled by those airlines to offer new premium products in the key US transcontinental market from New York to Los Angeles and San Francisco.

It is tough to predict if Delta can successfully execute a shuttle product on the intra-California route as other carriers in the past have not achieved much luck from similar efforts. Delta also has a lower profile in the Los Angeles market than American or United, based on seat deployment, so wooing corporate travellers from those carriers could prove to be a formidable challenge.

Delta’s new shuttle service between Los Angeles and San Francisco caps off somewhat of a push by the carrier at Los Angeles international airport. Between Apr-2013 and Jul-2013 the carrier introduced flights to Seattle and Spokane, Washington; Nashville, Tennessee and San Jose, Costa Rica. It is competing with its partner Alaska Air on flights to Seattle and American and Southwest on service to Nashville.

American handed Delta competition on service from Los Angeles to Raleigh-Durham and Columbus and United on flights to Fayetteville.

See related report: American answers Delta’s expansion in Los Angeles with its own push from LAX

Delta’s shuttle service between Los Angeles and San Francisco entails hourly flights from 0700 to 0900 on all weekdays, with some of the service operated seven days per week. The flights are flown by Delta Connection partner Compass Airlines with three class 76-seat Embraer 175 aircraft (12 first class, 12 economy comfort and 52 in economy).

The amenities include check-in 30 minutes before departure, in-flight Wi-Fi, complimentary snacks and cocktails for business and economy plus passengers, free beer and wine for all classes and assigned seating.

It’s a product upgrade in a highly-competitive market that features service from United, American, Virgin America and Southwest Airlines alongside Delta. San Francisco is the top domestic market from Los Angeles, based on data from the US Department of Transportation. 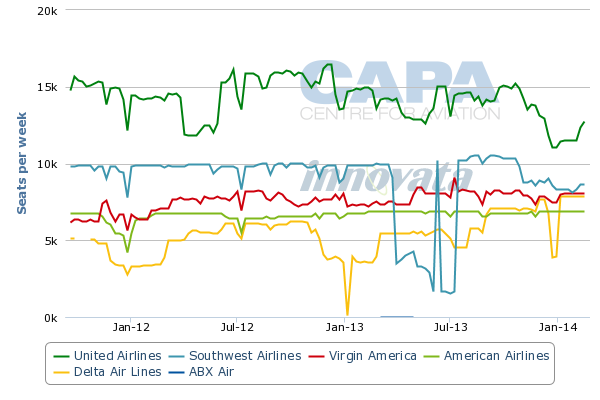 In that time period (25-Aug-2013 to 31-Aug-2013 – 1-Sep-2013 to 7-Sep-2013) every carrier increased their weekly one-way seat deployment in the market, with the exception of American. Delta has the largest increase of roughly 1,143 seats, which results in a 1.5ppt increase in its seat share to 14.5%. Mostly the seat share remains status quo with United still representing the bulk of seats on offer with a 30% share.

Source: CAPA - Centre for Aviation and Innovata
Note- seats calculations are approximate and based on one-way seats

Delta’s deployment of a shuttle service from Los Angeles to San Francisco will do little to change its overall standing in the fragmented Los Angeles market as it presently accounts for 14% of the weekly one-way seats (third behind United and American) and 10% of the ASKs deployed from the airport. Delta and Southwest also serve nearby Oakland International airport (51km from San Francisco International) with Delta accounting for roughly 20% of the 13,600 one-way weekly seats on offer and Southwest representing the remaining 80%. 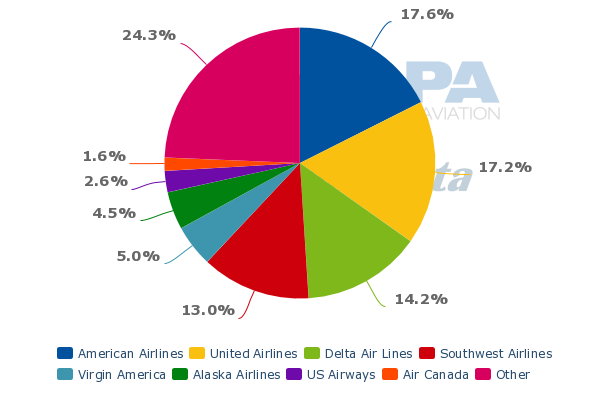 What Delta appears to be striving for with the new shuttle service is product differentiation from its legacy rivals and Virgin America. While Southwest’s nearly 23% seat share in the Los Angeles-San Francisco market is significant, it doesn’t have all the same product amenities as those other carriers. Delta can tout a uniform product on the same aircraft type to its corporate customers, as can Virgin America who offers two-class service on its fleet of Airbus narrowbodies. But Delta’s scope and network breadth allows it to obviously offer frequent, high-yielding customers an opportunity to build up loyalty miles for use on its extensive global network.

It is not clear if American or United will craft a competitive response, or seem concerned about Delta’s push to capture some corporate share on the US west coast. Given their larger footprint in Los Angeles and their base of entrenched corporate travellers, luring them away could prove challenging.

United also has the advantage of having end-to-end hubs on the Los Angeles-San Francisco pairing, which also gives the carrier the advantage of scale and network breadth opportunities (even though Delta is targeting O&D passengers with the shuttle flights, connectivity will play some role in the competition for corporate travellers).

But there could be lingering discontent among some of United’s corporate travellers after operational meltdowns during the 2012 summer high season that resulted in some high-yielding customers temporarily jumping to other carriers. United has spent the better part of a year trying to win those customers back. While the weather in San Francisco can sometimes be challenging, Delta can more readily make the pledge that it is operationally equipped to recover aptly from operational disruptions.

More than anything else the move to formally launch a shuttle product between Los Angeles and San Francisco underpins the carrier’s strategy (and the playbook of every other US major airline) to ensure it has a solid footprint in the most heavily-travelled corporate markets. Delta’s existing SkyMiles loyalty members will earn a minimum of 500 miles on the shuttle flights.

The decision to introduce a shuttle service on the US west coast follows Delta’s expansion of the concept from LaGuardia to Chicago O’Hare in 2010. Delta’s familiar company in that market includes American and United along with ultra low-cost carrier Spirit Airlines. So even though Delta is taking a gamble with US west coat shuttle service from Los Angeles to San Francisco, it knows how to compete with the major players in the market. Now it is up to those carriers to determine their response to Delta upping the ante for premium customers in a key US business market.