Only a handful of airlines across the Americas (COPA, American, Southwest, FedEx, Allegiant and Canada's WestJet) remained positive yesterday, in some cases after losing heavily the previous day. 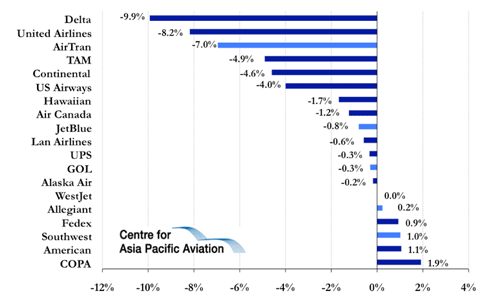 ALPA is the world's largest pilots union, representing nearly 54,000 pilots at 36 airlines in the United States and Canada.

Investors showed they were not nearly as impressed with the news as was the Association's President, Captain John Prater, who praised AirTran's pilots, "who have courageously and diligently combated their management's effort to bargain a concessionary agreement," adding ominously that, "We look forward to working together to secure the fair contract they deserve."

In a year which has more than half of the US' pilots awards being renegotiated, airline managements as a whole will be interested to note Captain Prater's boast that: "Through this ALPA-NPA merger, our union's collective strength will become even greater, as we move one step closer to unifying pilot groups of all sizes and that fly all types of aircraft for airlines throughout the United States and Canada."

For daily American share price updates direct to your inbox, sign-up now for a complimentary subscription to America Airline Daily.