Shares in Japan Airport Terminal Co, operator of terminal facilities at Tokyo Haneda Airport have remained relatively flat since the announcements regarding potential slot allocation to US airlines later this year. Shares in the company slipped 0.6% yesterday, adding to a loss of just 0.2% on Tuesday.

In the latest news on the slot allocations, Delta Air Lines requested the US Department of Transportation (DoT) prevent US airline members of the rival oneworld and Star alliances from operating services to Tokyo Haneda Airport, with Delta arguing that JAL (oneworld) and All Nippon Airways (Star Alliance) would provide "ample" opportunities for the carriers to offer services to the airport.

Delta was among five US airlines to separately submit or announce plans to submit applications, on 16-Feb-2010, to the DoT to provide services from select US destinations to Haneda Airport. The airlines are competing for four daily slot pairs, with the DoT receiving applications for 11 separate routes.

This is the first opportunity for US airlines to bid for slots at Haneda in 30 years. The airport is expected to be opened to US and other foreign carriers later this year, when the airport's fourth runway opens.

To receive fresh updates on the developments at Toyko Haneda Airport, sign up to Airport Business Daily – your strategic news resource on global airports delivered to your inbox each morning.

Shares in Airports of Thailand (AoT) were flat yesterday, ahead of the release of the group’s traffic highlights for Jan-2010. Passenger traffic across AoT’s airports rose 22.6% year-on-year, led by a significant improvement at Bangkok International Airport (+28.5% year-on-year).

Other traffic headlines in today’s edition of Airport Business Daily include: 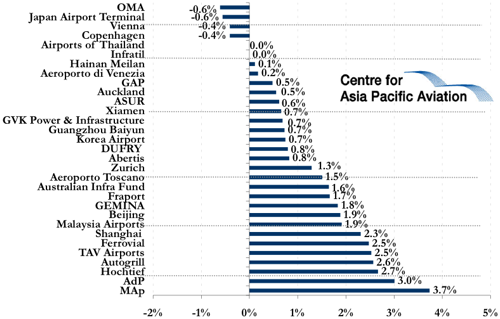