Delta opts to flesh out its 2016 European network with new flights from Minneapolis, Detroit and RDU

Delta Air Lines is branching out in its 2016 trans-Atlantic schedule, bolstering service from its lower-profile hubs in Minneapolis and Detroit. It is also introducing service from Raleigh-Durham to Paris, having initially mooted the route eight years ago.

The airline is playing to its positions of strength with the addition of trans-Atlantic services from its hubs in the interior of the US, which should allow Delta to both tap a large pool of local passengers in the metro region of Minneapolis and Detroit and also garner connecting traffic from US midwest spoke routes by touting one stop connections to popular European destinations and hubs of partner airlines.

Delta has been growing in Raleigh at a solid clip during the last couple of years, increasing the number of point to point markets it operates from the airport. The introduction of service to Paris is the next phase of that build up, and a key win for Raleigh-Durham International Airport, which has been working to enlarge its roster of long-haul services.

Delta plans to launch daily service from Raleigh Durham International Airport (RDU) to Paris Charles de Gaulle in May-2016, operating Boeing 757 aircraft. The airline first tabled plans to serve the route in 2008 for a Jun-2009 launch, but eventually opted not to launch the route as macroeconomic conditions weakened.

American shuttered its hub at the airport in the mid-1990s, but during the last few years Raleigh has maintained stable passenger levels. The 3.8% passenger growth RDU recorded in 2014 was the highest increase during the last few years. The 9.5 million passengers that travelled through the airport was the highest since 2009, but still below the 9.7 million travelers utilising RDU in 2008.

Previously, the local Raleigh Regional Transportation Alliance has estimated that the addition of long-haul flights to Paris or Frankfurt would generate approximately USD1.4 billion in economic impact over 25 years.

Delta is reportedly receiving some incentives to launch the new service to Paris, including the waiving of USD1.25 million in fees and the granting of USD500,000 to promote the new service. Those types of financing arrangements are commonplace for airports seeking new service, especially given the intense competition among medium sized non-hub airports vying for coveted long-haul flights.

The route seems like a logical choice for Delta, which has been building up its presence at Raleigh. In addition to operating service from Raleigh to its hubs in Atlanta, Cincinnati, Detroit, Los Angeles, Minneapolis, New York JFK and LaGuardia, Delta offers several point to point markets from Raleigh. Those routes include Baltimore, Boston, Cleveland, Fort Lauderdale, Hartford, Indianapolis, Orlando International, Philadelphia, Columbus and Tampa.

Delta is Raleigh’s largest airline measured by both seats and ASMs, accounting for about a 30% and 25% share, respectively. 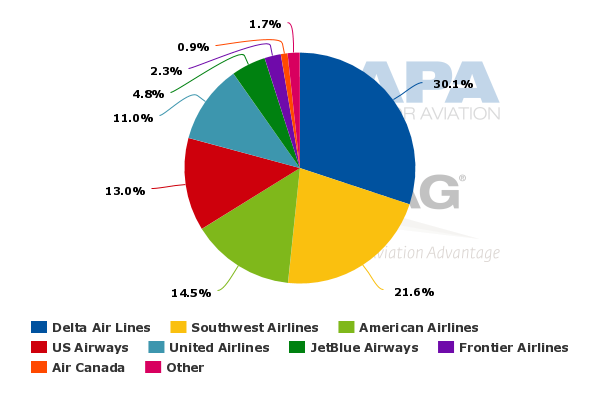 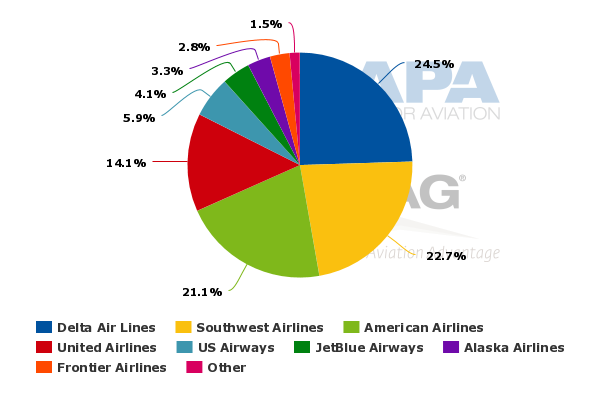 The ability to flow passengers over Raleigh and the local passenger pool (along, of course, with the incentives) have likely been decisive factors in Delta’s decision to launch service to Paris. The Raleigh News and Observer reported that roughly 750,000 passengers travel from RDU to Europe each year, and American only transports 10% of those passengers. Delta is also operating the flight in conjunction with its SkyTeam joint venture, which gives Delta the ability to market numerous connections through Air France’s hub at Charles De Gaulle.

The Raleigh-Durham metro area has a solid economy, according to ratings agency Fitch, which will help to make the new Paris flights viable. The agency has concluded that the North Carolina Research Triangle Region, of which Raleigh is a part of, “is characterised by high income levels, lower than average unemployment and strong population growth”.

Rome appears to be a viable option from Minneapolis, still a relevant hub for Delta

Delta is also adding trans-Atlantic service during 2016 from two of its hubs – Minneapolis and Detroit – which receive much less attention than Atlanta, New York or Seattle.

Those hubs remain key in Delta’s network, reflected by their stature in the airline’s top hubs measures by seats and ASMs. Data from CAPA and OAG show that Minneapolis and Detroit are Delta’s second and third largest hubs measured by seat deployment. On an ASM basis, Detroit (DTW) is Delta’s third largest hub and Minneapolis (MSP) is fourth largest. 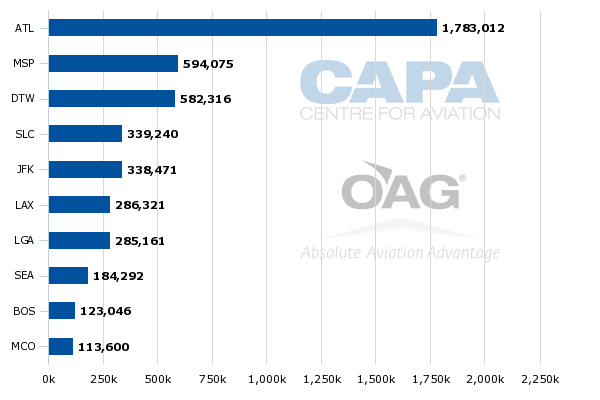 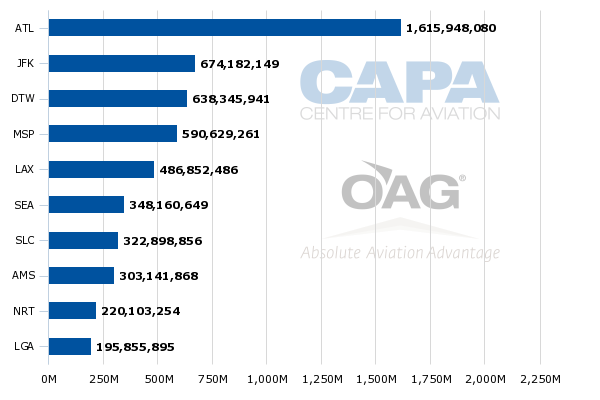 Delta has opted to add daily seasonal service from Minneapolis to Rome for the summer 2016 timeframe. The new flights join Delta’s existing Minneapolis trans-Atlantic services to London, Amsterdam and Paris, and trans-Pacific flights to Tokyo Narita.

The Minneapolis Metropolitan Airports Commission highlighted that Rome was the most popular European destination without direct service from the airport. With Minneapolis’ hub stature, Delta’s scale will be an advantage in building up the new service. It also benefits from connections offered by its SkyTeam JV partner Alitalia, which represents 39% of Rome Fiumicino’s seats and 33% of its ASMs, according to CAPA and OAG data.

Currently, Delta is the largest among the big three global US airlines operating between the US and Italy, representing a 22% seat share for the week of 05-Oct-2015, up from 19% the year prior. Combined Delta and Alitalia represent 51% of the roughly 45,000 one-way seats on offer between the US and Italy, so building on that strength from one of Delta’s large inland hubs appears a logical proposition.

Delta stands to benefit from a strong local passenger pool for the new seasonal service to Rome, based on economic data for the Minneapolis metro region. The Society For Human Resource Management estimates that median household income in the Minneapolis/St Paul metro is nearly USD15,000 higher than the national level. The region’s unemployment rate is approximately 3% compared with 5% for the US national average.

Connecting passengers will also take advantage of the new service to Rome as well. Rather than transfer through more crowded Delta airports such as Atlanta or JFK (Delta also serves Rome from its Detroit hub), passengers from US central and western markets may flow through Minneapolis instead.

Delta’s planned new daily service from its Detroit hub to Munich beginning in May-2016 appears to be largely focussed on O&D traffic, given the automotive business links between the two cities, and the fact that Delta has no partner in Munich for onward connectivity. Detroit’s trans-Atlantic services include Delta and Lufthansa service to Frankfurt and Delta flights to Amsterdam, Paris and Rome. Delta and its joint venture partner Virgin Atlantic also offer flights from Detroit to London Heathrow.

As Delta looks to expand its offerings in Europe, Munich, although not a high connectivity point, complements its existing service to Frankfurt, which is Detroit's fifth largest international route by seat deployment. Data from CAPA and OAG show that Delta has about a 49% share of the roughly 3,200 one way seats on offer and Lufthansa has a 51% share. 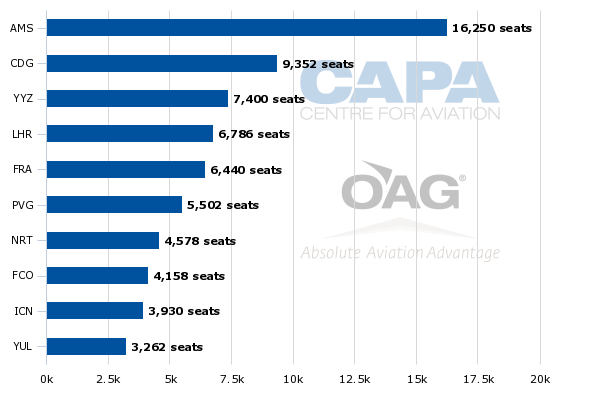 Delta also serves Munich from its hub in Atlanta, so the airline already has some brand awareness in the market. Although the flight seems like more of concentrated O&D market, similar to Minneapolis, passengers from spoke markets in the central and western part of the US likely prefer a shorter stop through Detroit to Europe.

All the new Delta routes are welcomed by airports. Paris could be a key test for RDU

New trans-Atlantic service by Delta from its hubs in Minneapolis and Detroit joins new flights from Salt Lake City to London Heathrow and New York JFK to Edinburgh operated in conjunction with JV partner Virgin Atlantic. With a seemingly stable US economy and the EUR trading weaker against the USD for the better part of year, Delta’s additions seem logical given the point of sale it can generate at its hubs, and the connectivity it can market from its SkyTeam joint venture partners.

For Minneapolis, Detroit and Raleigh-Durham, the new services are a welcome expansion to long-haul offerings that every airport is vying to secure. RDU in particular has much riding on the success of service to Paris in order to show it can support additional long-haul services.

The question now is if Delta's capacity growth will be offset in other markets – by itself or SkyTeam JV partners – as trans-Atlantic capacity discipline persists.