Delta merger of Northwest a “success”; Air Canada expects industry to recover in 12 to 18 months

The AMEX Airline Index rose 2.7% on Thursday (29-Oct-2009), with the majority of North and South American carriers seeing an improvement in stock prices, as the Dow (+2.1%) gained on news the US economy grew at a pace of 3.5% in 3Q2009. The result was the best for the economy in two years, reflecting the US Government stimulus support.

Delta Air Lines (+2.4%) has called its merger of Northwest Airlines a “success” after achieving its 2009 projection of USD500 million in benefits ahead of schedule and is now aiming for USD700 million in merger benefits in 2010. The two carriers are still however having  issues merging the contracts of ground workers and flight crews.

Air Canada (-1.7%) CEO, Calin Rovinescu, stated he expects it will be 12 to 18 months until the airline industry fully recovers from the global financial downturn. Mr Rovinescu stated that he is "not optimistic the recession is over” and the carrier expects a “tough” 2010. According to the CEO, while there have been some “sprouts of improvement”, stronger load factors do not mean the industry is improving.

IATA’s release of Sep-2009 traffic results showed an increase in international passenger traffic for the first time in 12 months. Passenger traffic worldwide was up 0.3% year-on-year for the month, but this was against a 3% drop in traffic in Sep-2008.

Latin American carriers meanwhile experienced a jump in international demand from -2.3% in Aug-2009 to +3.4% in Sep-2009, based on relatively robust regional economies

Gol up with Bovespa 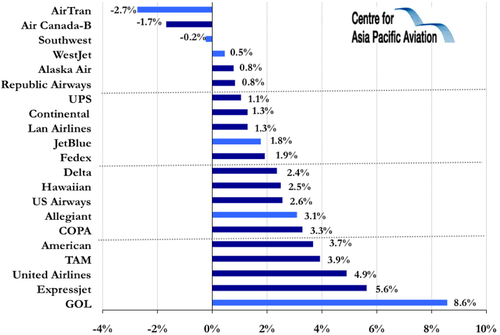