Delta Air Lines is retaining ties to a handful of some of its economically unviable smaller markets through a new partnership with Florida-based Silver Airways, which will serve the markets with 30-seat Saab 340 turboprop aircraft. Delta is partnering with the small turboprop operator after opting to shed the Saab 340s operated by its Delta Connection partner and former subsidiary Mesaba Airlines.

While one scenario does not constitute a trend, Silver Airways’ ability to assume those routes could give some credence to theories offered by some industry observers that as 50-seat jets continue to become undesirable, there is a niche market for smaller turboprops.

At the same time Delta is carefully selecting small markets where it plans to retain a presence, the carrier is making some tweaks at its newly-minted LaGuardia hub. This includes service cuts to Albany in New York, Dayton in Ohio, Ottawa in Canada and Philadelphia in Pennsylvania.

Delta in mid-2011 disclosed plans to discontinue service to 24 small destinations. In most of those markets the carrier received a government subsidy through the US Essential Air Service (EAS) programme for its operations. The cuts coincided with the elimination of its Saab fleet and efforts to stem USD14 million in annual losses it was incurring on some of those routes. The carrier estimated an average load factor of 52% in the 24 rural markets, with the worst performers averaging 12% loads. 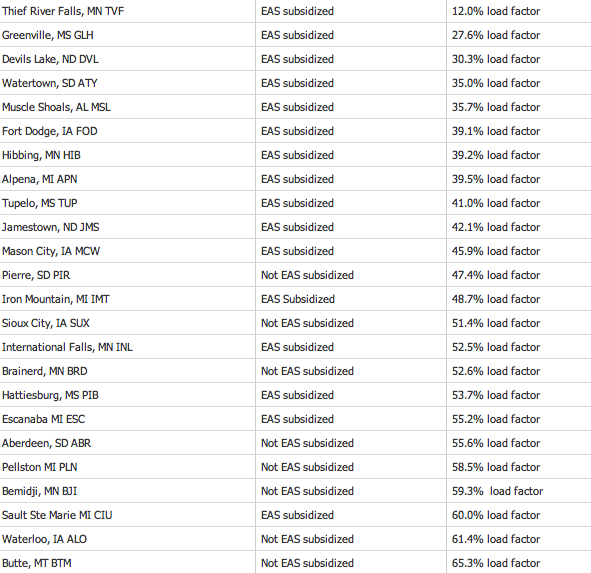 The carrier, through an interline with Silver Airways, will continue to have a presence in three of those markets – Hattiesburg and Greenville, Mississippi and Muscle Shoals, Alabama. All three of those markets are EAS subsidised, and during Jul-2011 when Delta detailed the route eliminations Hattiesburg had an average load factor of 54%, Muscle Shoals recorded 36% average loads and Greenville averaged a 28% load factor.

At present, Delta operates flights to those three markets from its Memphis hub. But effective Oct-2012 Silver Airways will operate service on those routes from Delta’s Atlanta hub through the interline agreement, and is also launching flights to Tupelo and Meridian, Mississippi from Atlanta. Delta has been steadily cutting service from its Memphis hub, which during late 2012 will feature roughly 125 daily departures compared with roughly 300 in 2000 when it served as a hub for Northwest Airlines. Northwest merged with Delta in 2008.

Since the rebranding, Silver Airways has been steadily introducing Saab 340B-plus turboprops to join the 21 19-seat Beech 1900Ds that were the backbone of Gulfstream’s fleet. Silver Airways expects to have 12 34-seat Saab turboprops in operation by year-end 2012. In global distribution system (GDS) listings Silver Airways’ flights from Atlanta to the small domestic US markets are listed under Island Air. Silver has a partnership with Island Air to list flights in the GDS systems.

Silver Airways route map from Atlanta as of 25-Sep-2012 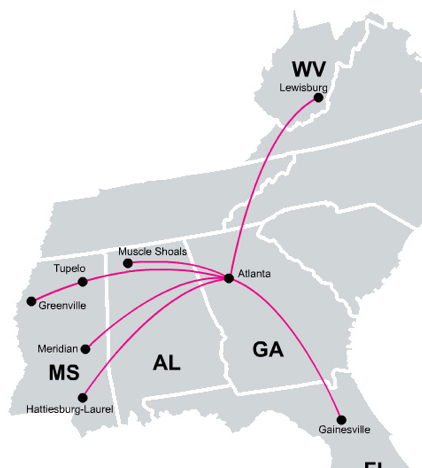 Delta is the only carrier offering flights to Greenville, Hattiesburg and Muscle Shoals, and presently the carrier is operating service to those markets from Memphis with 50-seat regional jets. With the transition of the flights from Memphis to Atlanta in Oct-2012, passengers will have to transfer through Atlanta and book on Silver Airways.

Service between Tupelo and Memphis is also transferring to Atlanta. Delta is also ending flights from Atlanta to Meridian, Mississippi in Oct-2012, with Silver picking up the service. As is the case with the other three airports, Delta is the only carrier serving Meridian.

The partnership between Delta and Silver Airways must reflect a conclusion by Delta that it needed to keep up a presence in those small markets while relinquishing the burden of attempting to make profits in them. Silver Airways is receiving EAS subsidies on some of the routes it is operating in its partnership with Delta, so it remains to be seen if the smaller carrier will have a better chance than resource-rich Delta to make those routes profitable.

Hattiesburg and Tupelo proved to be some of the small markets where Delta achieved higher load factors. By partnering with a mega carrier like Delta, Silver Airways gains some market traction that could allow the flights to operate viably. Given Atlanta’s status as the largest airport in the US and the world, Silver could have a chance of building up to adequate service levels compared with much smaller Memphis, whose traffic fell by 13% from 2010 to 2011.

But EAS markets have historically been difficult to turn into strong, stand-alone and unsubisdised markets, and Silver faces the same challenges as other airlines in creating sustained demand on those smaller rural routes.

Silver Airways is operating an aircraft that Delta has opted to eliminate from its own branded operations, but Delta’s decision to partner with the smaller carrier does show that Delta believes a place exists for turboprops in the US market outside of its own operations.

While there are a finite number routes in the US to profitably deploy smaller turboprop aircraft, there are carriers such as Silver Airways that believe there is a service gap, and opportunities to serve those markets. The carrier is also partnering with United through a codeshare on EAS routes from Washington Dulles to Beckley, Clarksburg, Lewisburg and Morgantown in West Virginia; Altoona and Johnstown in Pennsylvania; and Staunton in Virginia.

Many of the new Silver Airways routes from Dulles were previously operated by United’s former partner Colgan Airways. Colgan shuttered operations in Sep-2012 as part of the Chapter 11 restructuring by Colgan parent Pinnacle Airlines.

Many small US regional operators such as Cape Air and even larger groups including SkyWest have stated replacements are needed for 30-seat turboprops, but the large regional aircraft manufacturers have concluded there is not a sufficient business case, based on demand, to create a clean-sheet aircraft. Carriers like Silver Airways and other airlines will need to rely on the second-hand market to source increasingly older aircraft for their operations.

Delta, meanwhile, has started to prune service from its newly-established hub at New York LaGuardia airport made possible through a slot swap with US Airways entailing the trading of slots at LaGuardia and Washington National airports. The carrier rolled out new destinations in two waves, and as of Jul-2012 Delta operated about 100 new daily flights from LaGuardia to 29 destinations.

Flights to Albany, NY ended in Jun-2012, while planned service to Dayton, Ohio was cancelled prior to launch. According to schedules in Innovata, US Airways served those routes through Jul-2012, which means the markets have lost service from New York. Delta also ended service from LaGuardia to the leisure market of Myrtle Beach in South Carolina on 01-Sep-2012.

During Oct-2012 Delta is ending flights from LaGuardia to Ottawa in Canada - a route dominated by Air Canada. Current Innovata schedules show that Delta accounts for only 17% of seating capacity in the market. Another route cut entails Delta’s service from LaGuardia to US Airways’ Philadelphia hub. It appears Delta aims to deploy its assets where it can attain more scale. 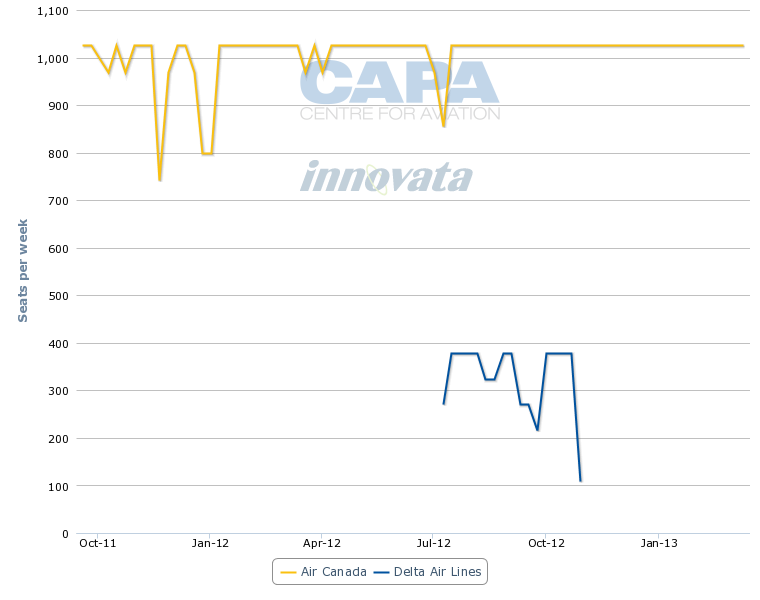 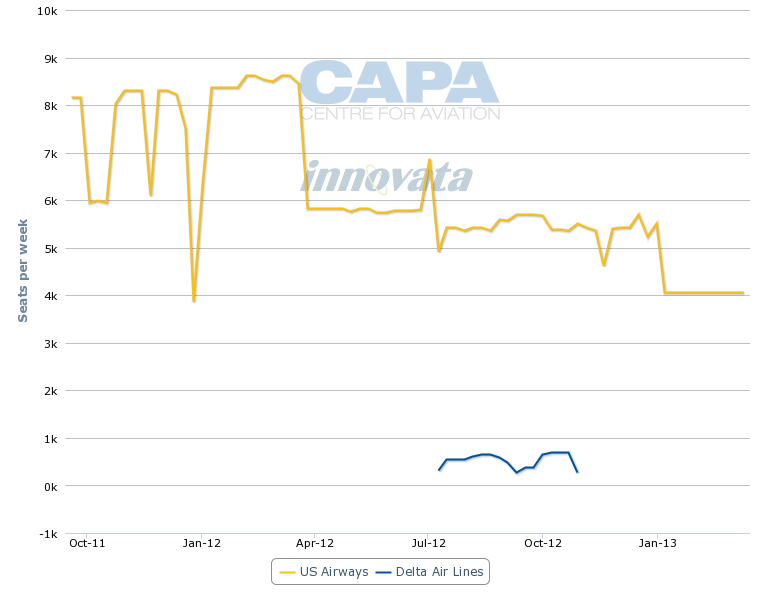 Despite the route cuts, Delta continues to tout its performance in New York. Delta president Ed Bastian recently stated the carrier’s margin in LaGuardia improved by 3 ppts in Jul-2012 on a 40% hike in capacity from the airport.

Elsewhere around its system Delta is shifting 14 weekly flights to Quebec from its Detroit hub to New York, and plans to launch winter seasonal service from Columbus, Ohio and Indianapolis, Indiana to Orlando. Delta is joining Southwest and AirTran on the new Orlando routes. There are currently a total of about 2500 weekly seats between Orlando and Columbus and about 2700 seats on the Indianapolis-Orlando route.

Delta’s latest network moves reflect the carrier’s pledge to shun smaller aircraft from its route offerings and appear to show the airline’s willingness to quickly exit markets that show little promise of profitability. Even as the carrier has cut some service from LaGuardia early on, Delta’s performance in the market shows the carrier’s offensive in New York is generating returns as operating margins for 3Q2012 should fall between 9% and 11%. Its decision to partner with another carrier to retain a presence in some small markets is a low-risk strategy of ensuring that it can offer a breadth of US domestic destinations without compromising its bottom line.