Delta gains from analyst comments; Southwest objects to Delta and US Airways plans to hand out slots

Delta Air Lines was also up after analysts from Jesup & Lamont and Hudson Securities stated during trading they are maintaining ‘Buy’ ratings on the carrier.

Jesup & Lamont stated shares have recently lagged other carriers, as Delta’s headline operating numbers are lower than others due to the fact its performance held up better than the peer group last year. The analysts believe the carrier is well positioned to show year-on-year unit revenue improvement and expect FY2010 earnings per share (EPS) of USD1.79, implying a price target of USD18.

Meanwhile, Hudson Securities raised its price target for the carrier from USD17 to USD20, due to better earnings and valuation results from its competitive capacity study. The study found competitive capacity exiting the carrier’s markets is of a higher rate than its rivals. The analyst now expect FY2010 EPS1.70 for Delta, up from prior estimates of USD1.35.

Analysts at JP Morgan also raised their price target for the carrier from USD13 to USD14, with a ‘Neutral’ rating.

Southwest Airlines (+0.8%) called on the US Department of Transportation to auction off slots from Delta Air Lines and US Airways at La Guardia Airport and Reagan National Airport to the highest bidder, in place of Delta and US Airways’ plan to award the slots to JetBlue, WestJet, AirTran and Spirit Airlines. Southwest is objecting to the deal on the grounds that when slots become available they should be open to all comers, not traded between airlines. See related report: Update: Southwest angry over Delta/US Airways slot deal

American Airlines (-1.4%) continued to decline after the carrier updated its guidance results the day prior. In response to the update, Jesup & Lamont narrowed its loss estimate for 1Q2010 to an EPS loss of USD1.12 per share, up from a previously estimated loss of USD1.30 per share and the consensus estimate of a loss of $0.95 per share. For the full year, Jesup & Lamont estimates EPS of USD1.03 per share, compared to a loss of USD4.63 per share in FY2009. The analysts maintained a ‘Hold’ rating.

Analysts at Hudson Securities meanwhile maintained a ‘Neutral’ rating for the carrier, but raised its price target from USD7 to USD9.

However, JP Morgan cut its price target for American from USD16 to USD15, rating the carrier’s stock ‘Overweight’. The analysts also made adjustments to the following carriers’ price targets during trading: 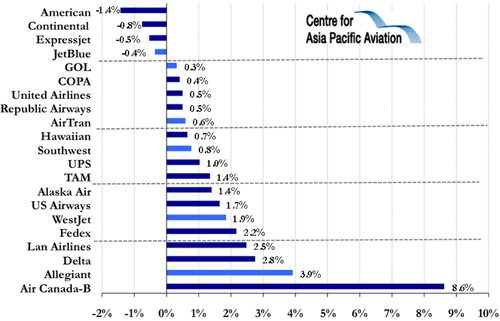