Delta, Continental and Alaska Air fall on downgrades, US Airways and LAN upgraded

North and South American carriers’ stocks plunged on Thursday (04-Feb-2010), following the release of weak economic data in the US, including an unexpected increase in US jobless claims in Jan-2010, and an analyst downgrade of some carriers. Consequently, the AMEX Airline Index (-5.6%) was down, as was the Dow (-2.6%). Oil prices (-5.0%) also plummeted, to USD73.14.

Morningstar equity analyst, Basili Alukos, stated he was not surprised by the fall, as the “industry was pricing an extremely rosy outlook”. According to Alukos, airline traffic growth typically lags employment by approximately six months, thus the decline in shares on Thursday.

Also during trading, JP Morgan downgraded Delta Air Lines (-7.7%), Continental Airlines (-9.2%) and Alaska Air Group (-3.8%) from ‘Overweight’ to ‘Neutral’, due to a recent run up in the carriers’ stock values.

The analysts also upgraded US Airways’ (-3.0%) stocks from ‘Underweight’ to ‘Neutral’, easing the decline in its share price.

However, JP Morgan remains “bullish” about US airline industry’s performance for 2010, stating it expects total revenue to increase 11.4% year-on-year, with US Airways and United Airlines in particular to report improved unit revenues.

LAN (-3.1%) meanwhile received an upgrade from analysts at Morgan Stanley, who upgraded the stock from ‘Underweight’ to ‘Overweight’, with a price target of USD21. However, the carrier’s stock was dragged down by the wider market, with Chile’s IPSA down 2.0% at the end of trading.

Delta also reported disappointing Jan-2010 traffic results during trading, with passenger numbers for the month down 4.4% year-on-year, despite being in the thick of the global financial downturn this time last year. Load factors rose only 0.5 ppts, to 76.6%, as traffic (RPMs) fell 5.0% and capacity was decreased by 5.6%.

Also reporting traffic results during trading, Republic Airways (-4.6%) reported a 66% increase in passenger numbers, to 2.2 million, as a result of its acquisition spree. Load factor rose 5.0 ppts for the month, to 68%. See related report: Q400s out of Frontier, Embraers in

Also reporting traffic results on Thursday were Southwest (-3.8%) and JetBlue (-5.2%). See related report: Impressive PRASM improvement for Southwest, not so for JetBlue.

More on the latest traffic and financial results for North and South American carriers can be found in America Airline Daily.

Hawaiian Airlines (+3.0%) meanwhile reported a net profit of USD35.0 million for 4Q2010, compared to a loss of 11.9 million in the previous corresponding period, despite a 1.2% drop in operating revenue and 7.1% increase in operating cost for the period. Operating profit was meanwhile down 57.7% year-on-year, to USD16.1 million. 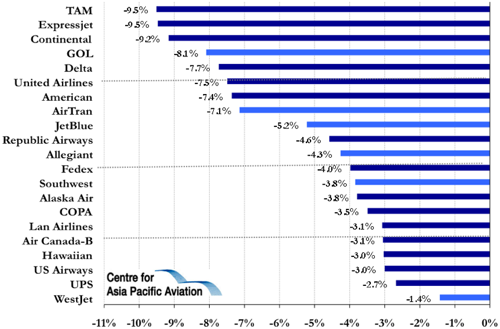