Delta Air Lines has touted the benefits of its upgauging strategy for years, and its narrowbody upgauge continues in 2019 as it builds up a fleet of Airbus A220 narrowbodies. The airline has calculated that it will be refleeting up to 35% of its mainline fleet during the next five years.

At YE2018, Delta was preparing for the first revenue flights of its A220s on routes from New York LaGuardia to Dallas and Boston. The airline touts that the aircraft offers a superior experience to its existing equipment while driving down costs.

As its narrowbody revamp and upgauge from regional jets continues, Delta is turning part of its attention to a widebody fleet revamp for replacement of ageing Boeing 767 and 757 jets. The airline has cautioned that it is a process that will take a while; but the company is no doubt carefully studying its options as the 767s are scheduled for retirement over the next decade.

Using a baseball analogy, Delta executives have concluded that the airline is in the third or fourth inning in a years-long fleet upgauge designed to offer passengers a better product, to enlarge margins and to cut costs. Delta, the world's most profitable airline, has one of the oldest fleets in the world and is gradually upgrading.

The airline started by upgauging its 50-seat regional jets that were less fuel efficient, and limited in their revenue generating abilities due the airline's inability to configure the jets with a premium cabin.

Delta has calculated that on a 900 mile stage length, with fuel costs of USD2.25 per gallon, the cost per seat with upgauging is significant, and believes that next generation aircraft technology provides more opportunity to drive down costs. 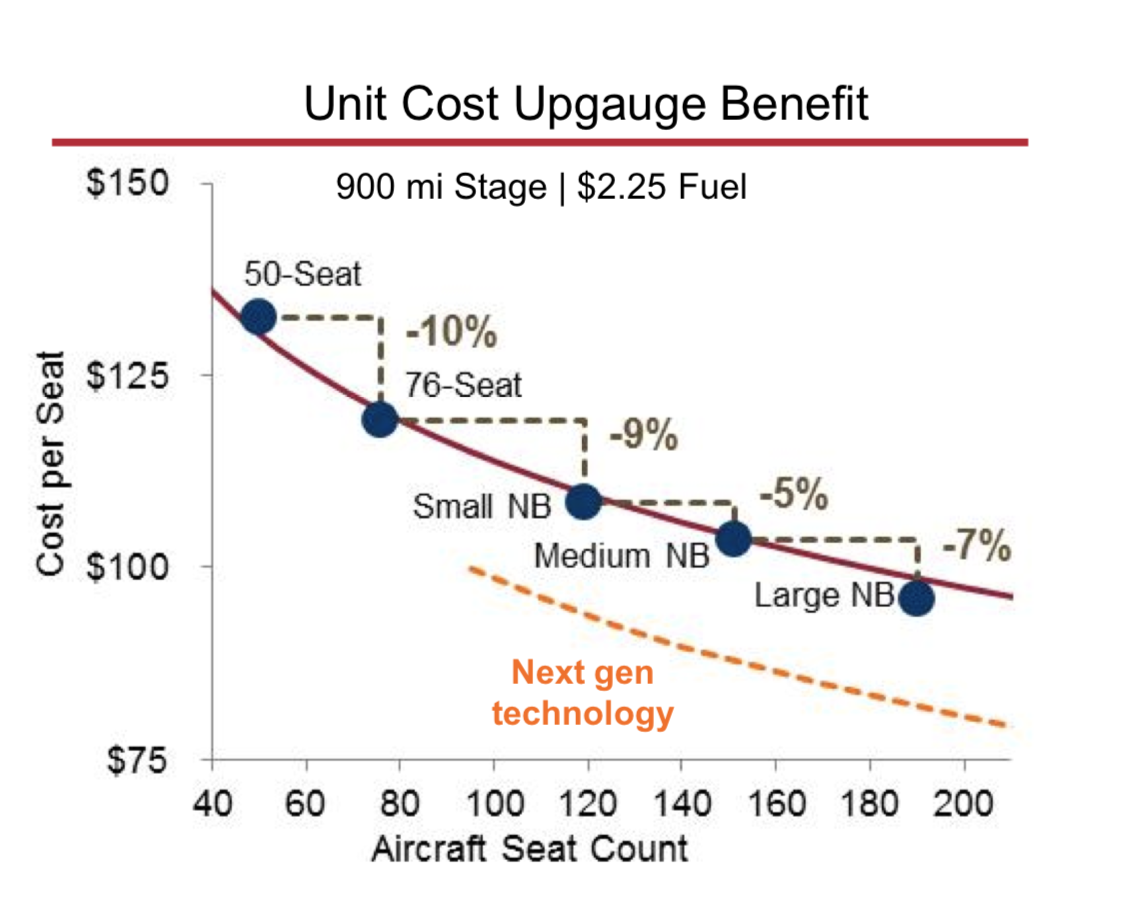 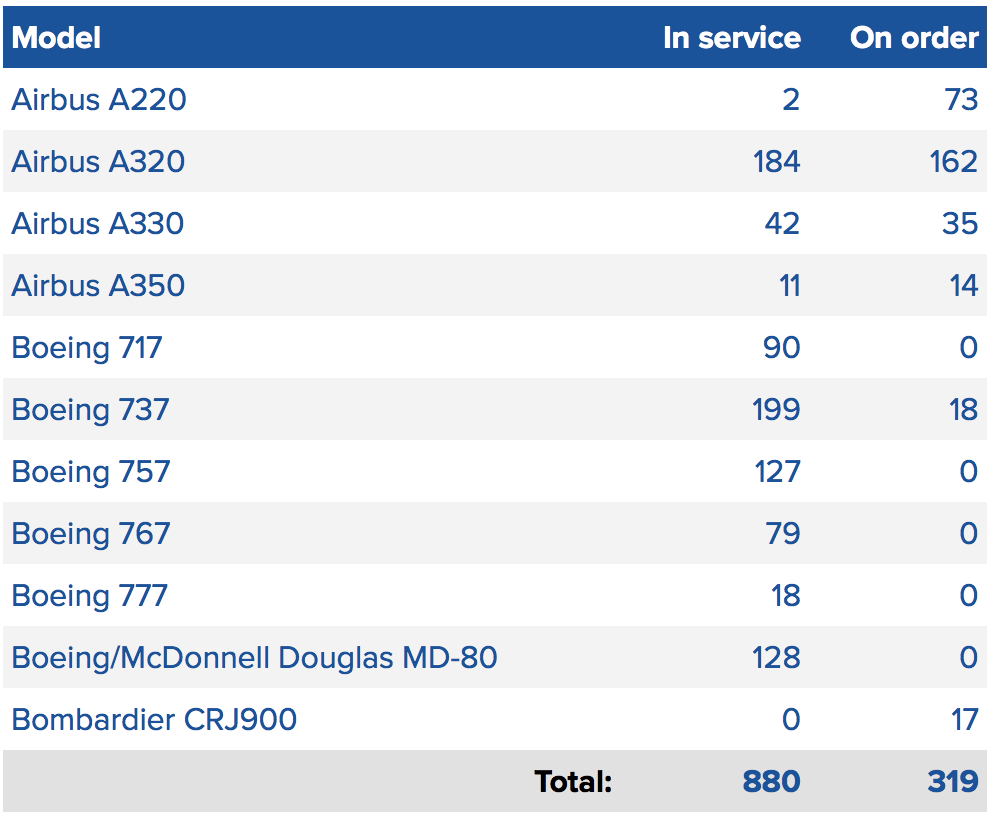 Delta continues to offer praise for Airbus and the A220

As of mid Dec-2018, Delta has already accepted delivery of two A220 narrowbody jets and expects to add 25 more in 2019. The A220 is scheduled to start revenue service at the end of Jan-2018, from the airline’s New York LaGuardia hub to Boston and Dallas.

Recently, Delta executives offered insight into the launch of A220 services, company president Glen Hauenstein noting that New York to Dallas “seems like a long way to go on a 76-seat RJ”.

Mr Hauenstein explained that with its wider seats, larger windows, bigger overhead space and quieter interiors, the A220 offers customers a much better experience. “And the great part about that is our cost of production for the same flight is actually going to go down”, he stated.

Company CEO Ed Bastian also endorsed the A220, noting “we’re going to take 25 of them next year [2019] and they’re right on schedule”. He also added: “One of the things the Airbus brings to the platform is scale with the supply chain to continue to help Bombardier not only keep the product flowing in terms of accelerating the order book, but also bring the price points down, the cost points down for the company.”

Delta begins to consider 767 and 757 replacements

Delta’s domestic upgauging has been a point of pride for the airline for a number of years, but the airline is just starting to evaluate its wide body fleet replacement.

CAPA’s fleet database shows that Delta operates a total of 150 widebody aircraft, representing 17% of its total aircraft in service.

Delta Air Lines breakdown of its fleet in service, by aircraft type, as at Mid-Dec-2018 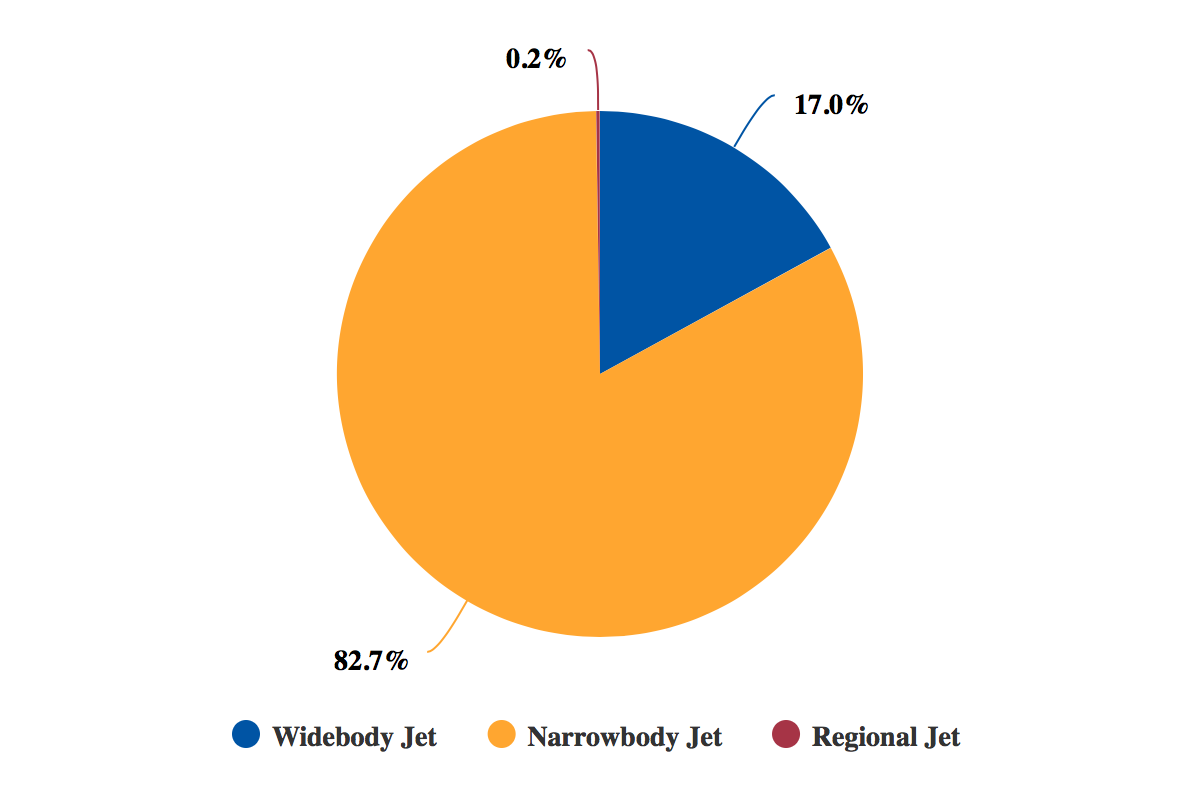 The airline has 49 widebodies on order, representing 15% of its total order book.

Delta Air Lines breakdown of it fleet on order, by aircraft type, as at mid Dec-2018 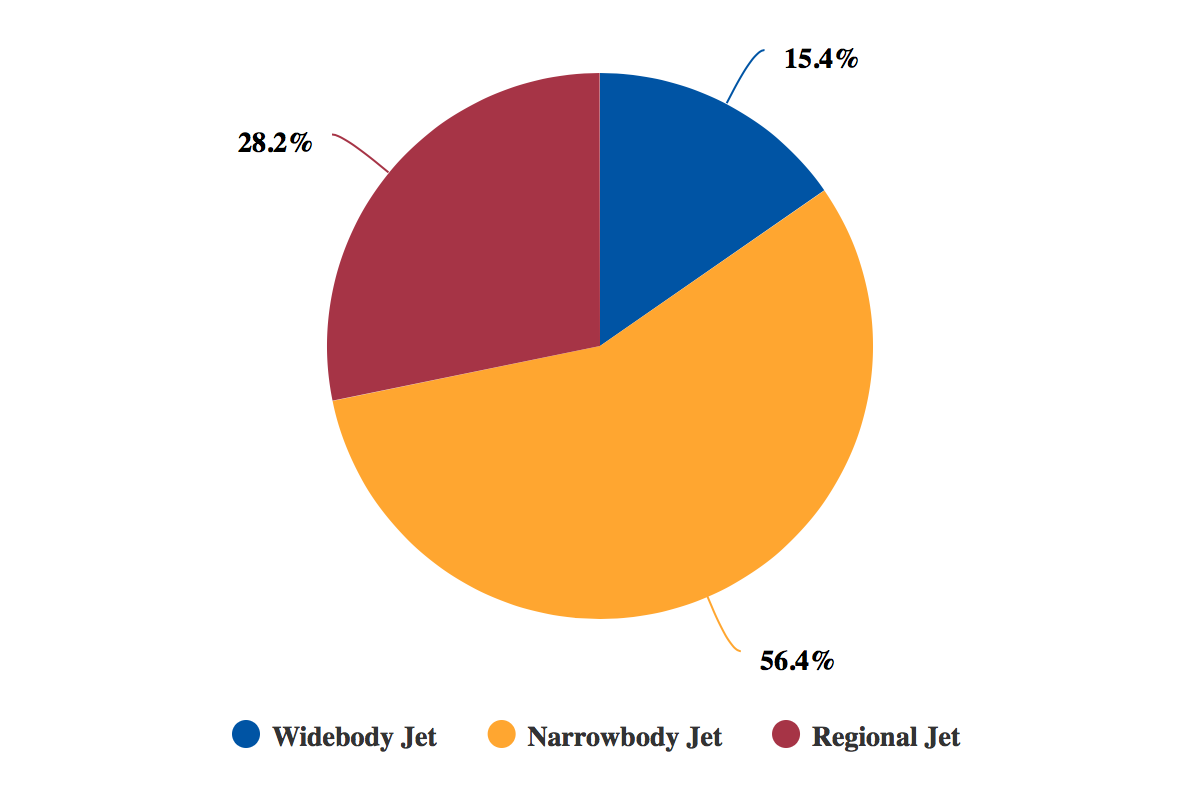 The airline plans to retire its 79 elderly 767 widebodies during the next decade, and is also planning 757 retirements.

Tough to predict how Delta will approach its widebody replacement

Delta is keeping its options open on how it will ultimately approach the widebody replacement.

The airline has expressed an interest in being the launch customer for Boeing’s middle of the market aircraft, and Boeing has recently stated that it has discussed the aircraft type with more than 60 customers worldwide.

The manufacturer’s consistent message is that it plans to make a firm decision regarding the middle of the market jet in early 2019, so Delta is also waiting for Boeing’s decision as it works to determine the future composition of its widebody fleet.

Presently, Delta’s widebody order book is more weighted toward Airbus; however, the airline will no doubt conduct a competitive campaign for replacement of its smaller widebodies.

But Delta could also need replacement aircraft before a middle of the market aircraft enters service, which could open opportunities for Airbus if the airframer can provide Delta with favourable terms for additional orders. Airbus has shown a certain level of flexibility towards Delta, given the recent pushback of A350 deliveries and the expansion of Delta’s A330 order book, and would no doubt also welcome an opportunity for expansion of the A321neo order book at Delta.

Airline fleet management is a living science; Delta is working to create a fleet composition to maximise efficiency and costs while continuing to widen the competitive gaps in the passenger experience that it has with respect to its large US global network rivals.

In many ways, Delta is behind its rivals with its fleet revamp, but the airline remains long on ambition in working to create an operating fleet to keep it competitive for the long term.