Delta Air Lines recorded strong results in 2Q2014, delivering its fourth consecutive quarter of unit cost growth below 2% while posting a 17% improvement in its quarterly profits.

Delta’s overall robust financial performance was driven by gains in its domestic and corporate markets. Despite some concern about overcapacity in the trans-Atlantic during the summer high season, Delta expects solid revenue growth on those routes, and is working with its joint venture partners to reduce capacity in the upcoming winter season to ensure a rational supply-demand balance.

As Delta believes its favourable cost performance will continue and domestic demand remain solid, the airline projects another favourable financial performance in 3Q2014, setting the stage for Delta to deliver on its stated goals of an annual 11% to 15% operating margin and a return on invested capital of more than 15% 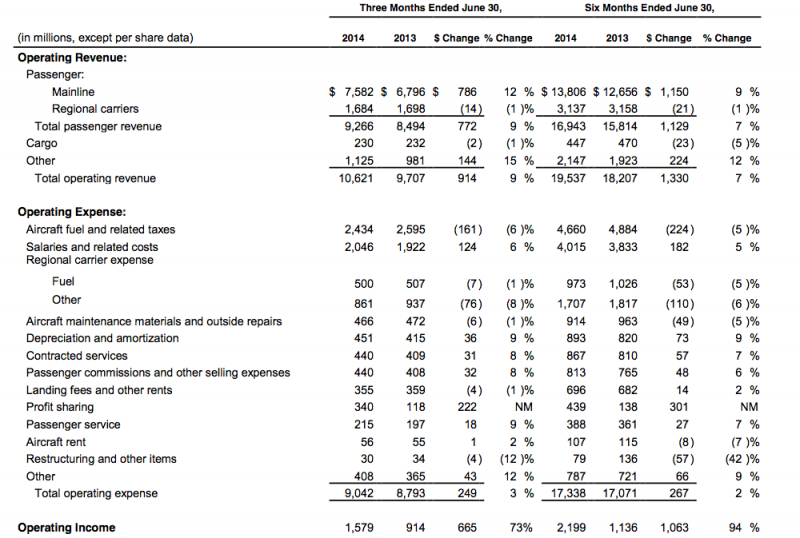 Delta also recorded a USD168 million decline in fuel costs even as unrest in the Middle East has recently created some volatility in fuel prices. The airline enjoyed USD99 million in hedge gains as well as recording a USD13 million profit at its Trainer refinery. Delta explained it was beginning to reap benefits from sourcing more domestic crude.

During 2Q2014 the airline estimated that 40% of Trainer’s input was sourced domestically versus 5% the year prior. As it grows to 70 million barrels per day of domestic crude, Delta expects Trainer, whose ramp-up was much slower than initially forecast, to break even in 3Q2014.

Delta CEO Richard Anderson during a 2Q2014 earnings discussion highlighted that roughly 60% of the airline’s business is within the US domestic space, and the company enjoys a 13% unit revenue premium to the industry in those markets.

The domestic entity was Delta’s top performing geography in 2Q2014 with 10% unit revenue growth driven by a 7% rise in yields. The airline’s domestic capacity grew 5% year-on-year.

Delta attributed the strong performance in its domestic markets to particular strength in its Atlanta and New York hubs. Airline president Ed Bastian remarked that Atlanta recorded double digit unit revenue gains year-on-year on a 2% rise in capacity while Delta’s New York operations at LaGuardia and JFK benefitted from a strong spring break period in the US.

In Seattle, where Delta is making a push both internationally and domestically, the airline calculates that unit revenues increased 2% on 30% capacity growth year-on-year in 2Q2014. Its capacity growth included the launch of new long-haul flights to Seoul, Hong Kong and London. Delta recorded a 6% increase in unit revenues on its domestic routes from Seattle on 25% capacity growth.

The airline also cited a strong performance in corporate revenues in 2Q2014 – 8% unit growth driven by double digit gains in the financial, banking and media sectors. It is likely Delta’s new lie-flat business seat on service from New York to Los Angeles helped lift its performance in the media business segment.

Previously Delta has warned that its performance in the Latin American market during 2Q2014 would be affected by diminished corporate demand during the FIFA World Cup soccer tournament held in Brazil during Jun-2014 and Jul-2014.

Delta’s unit revenues and yields in Latin America were essentially flat year-on-year in 2Q2014 on a nearly 24% rise in capacity. Mr Bastian highlighted that its partner Gol provided one-fourth of Delta’s traffic on flights between the US and Brazil and Aeromexico delivered nearly one-fourth of the traffic on Delta’s flights into key business markets in Mexico. Delta estimated that traffic generated USD36 million in incremental revenue during 2Q2014. Delta has an equity stake in each airline, and its partnerships with those companies is a key element in its Latin American strategy.

Mr Bastian explained that forward bookings for the US autumn in Delta’s Latin American markets look strong; however, he warned that the airline’s pull-down on service to Venezuela would affect Delta’s Latin unit revenues by 3-4 points in 3Q2014. Delta has roughly VEF190 million frozen in Venezuela. Beginning in Aug-2014, Delta is cutting its daily Atlanta-Caracas service to once weekly.

A still-weak yen helped pull down Delta’s performance in the Pacific as unit revenues fell 3% and yields dropped almost 2% on flat capacity growth. Mr Bastian estimated Delta’s yen revenue declined USD10 million in 2Q2014. It is 75% hedged against the yen through 2015, and estimates the value of those hedges sits at more than USD130 million.

Delta’s revamping of its Pacific network continues as it is cutting its capacity from Tokyo to beach markets during the summer months by 15% and 10% on its intra-Asia routes.

Delta often fields queries about a potential trans-Pacific joint venture similar to the immunised relationship it has with fellow SkyTeam partners Air France-KLM and Alitalia. Mr Bastian explained that Delta has encountered challenges during the past several years in developing a joint venture construct with fellow SkyTeam partner Korean Air. But he stated Delta looks forward to making progress in that regard, and then in China over the long term.

Delta headed into its earnings discussion prepared to address the growing concern of overcapacity in the trans-Atlantic market as both its SkyTeam partner Air France and Lufthansa have expressed concern about oversupply in the market place.

In 2Q2014 Delta posted favourable unit revenue growth of 7% in its trans-Atlantic markets and nearly 6% growth in yields as capacity fell almost 2% year-on-year. Its joint venture with Virgin Atlantic helped drive 5% unit revenue growth in its London Heathrow market on an 18% rise in capacity.

Delta and its joint venture partners Air France-KLM and Alitalia appear to be working to address the capacity issues in the trans-Atlantic, and have refined their joint capacity increase during the winter timeframe (Nov-2014 to Mar-2015) to 1% to 3%, which is roughly a halving of their current published capacity increase. Mr Bastian explained the new estimates are in line with projected economic growth in Europe, and stressed the SkyTeam partners have flexibility to make further adjustments if necessary.

While facing some geographical challenges, Delta should produce solid results in 3Q2014

Even as Delta works to mitigate some oversupply in the trans-Atlantic, improve its fortunes in the Pacific and braces for some headwinds in Latin America, the airline is forecasting a favourable performance in 3Q2014 with 15% to 17% operating margins and flat to 2% unit cost growth.

The airline is warning that unit revenue comparisons for 3Q2014 become tougher year-on-year as it expects growth of 2% to 4%. Delta recorded approximately 7% unit revenue growth in 3Q2013. But overall Delta continues to believe the demand environment remains strong, especially in its domestic entity. It clearly has the benefit of more than half of its business being dedicated to the domestic space.

There is no doubt that Delta continues to enjoy the competitive gap it has created with its legacy peers as it now works to benchmark itself against other S&P industrial transportation companies.

Delta is maintaining its mantra of capacity and cost discipline while setting what it deems as aggressive goals for itself in the metrics of operating margin, ROIC and USD3 billion annually in free cash flow.

For now it does not appear that Delta faces any huge obstacles in achieving those goals, and should continue to reward its patient shareholders that are finally enjoying a return on their investment.  After attempting to put fears of overcapacity in the trans-Atlantic to rest, Delta presently seems to be on a steady course to deliver a solid 2H and CY2014 financial performance despite some geopolitical issues creating uncertainty in the market place.