Delta is starting 2015 with headwinds due to the appreciation of the USD against some weaker currencies, but remains confident of meeting its stated financial targets that include ROIC of more than 18% and operating margins of 11% to 14%.

An anticipated significant USD2 billion in fuel savings during 2015 will also help blunt some of the effects from currency weakness; but Delta is stressing that it will use the savings to slash debt, and pending board approval, possibly increase shareholder rewards.

Special items drag down Delta’s profits, but it exceeds targets in other metrics

Including special items totalling USD1.4 billion, Delta’s loss in 4Q2014 was USD712 million compared with profits of USD8.5 billion the year prior. Its results in 4Q2013 included a USD8 billion non-cash gain stemming from the reversal of the company’s tax evaluation allowance. Delta’s GAAP net income for CY2014 was USD659 million compared with a profit of USD10.5 billion the year prior, which also reflects the tax reversal gains.

Excluding those special charges, Delta recorded net income of USD649 million for 4Q2014 and USD2.8 billion for CY2014. Its operating margin for the year was 13.1%. Ticking off a list of financial metrics that Delta exceeded in 2014, CEO Richard Anderson recently commented to analysts and investors that “our ROIC [return on invested capital] goal is 15%, we hit 20.7%. Our free cash flow goal is USD3 billion, we hit USD3.7 billion”.

Revenue from Delta’s premium economy offering now dubbed Comfort Plus increased 16% in the quarter, and the airline’s management now estimates that product is generating an annual incremental revenue stream of USD350 million.

The airline’s passenger revenue growth of 5% and 6% in 4Q2014 and YE2014 was driven by strength in its domestic entity, which was Delta’s best performing market throughout 2014. During 4Q2014 Delta’s domestic unit revenues increased 5.2% year-on-year, driving a 2.8% rise in yields. The company’s domestic capacity grew 5.2% year-on-year.

Delta cited strong results in New York and Seattle, noting Seattle’s domestic unit revenues increased 6% year-on-year in 4Q2014 on a 33% rise in capacity. The airline recorded 7% growth in corporate sales in 2014 driven by strength in the financial, media and automotive sectors. Delta executives remarked that the strong corporate sales performance helped drive its New York hub at LaGuardia to profitability.

Delta recorded the weakest performance in the Pacific during 4Q2014, driven by continued devaluation of the JPY against the USD. Net of hedges, the pressure from the devaluation of the JPY reduced Delta’s revenue in 4Q2014 by USD31 million, and represented 4ppt of the 5% unit revenue decline in its Pacific entity. The airline’s capacity was down 0.5% on Pacific routes in 4Q2014, and previously Delta has estimated that Pacific capacity in 2015 will fall 6% to 8%, and its capacity on flights from Japan will fall 15%.

The capacity cuts are part of a Pacific restructuring that entails the retirement of its 16 Boeing 747-400 widebodies. Four jets exited the airline’s fleet in 2014, and Delta estimates that downgauging from 747s to smaller widebodies resulted in a USD25 million improvement on its intra-Asia routes from Tokyo in 4Q2014. The airline projects that its operations in Japan should be profitable in 2015.

Even with the Pacific capacity cuts, Delta is seeking approval to launch flights from Los Angeles to Shanghai in Jul-2015. Company management stated that the extension of the visa programme between the US and China was an unexpected move that helped accelerate its plans to launch the route.

Chief revenue officer Glen Hauenstein also cited benefits of co-locating in the same terminal in Shanghai with SkyTeam partner China Eastern.  “We’re already connecting about a little less than 200 people a day to Shanghai and points in interior China, and starting in April [Apr-2015] we’ll be able to reduce our minimum connect times ...this is [Los Angeles-Shanghai] something that was in our five year plan, we just saw an opportunity to accelerate it given some exogenous events that all seemed to sync up at once”, Mr Hauenstein concluded.

Delta’s trans-Atlantic unit revenues were flat year-on-year during 4Q2014 as yields increased 2% on 2% capacity growth. The airline’s strongest points in the trans-Atlantic during 4Q2014 were flights to Paris and Amsterdam operated in conjunction with its SkyTeam joint venture partners Air France-KLM. Airline president Ed Bastian remarked that markets in Africa, the Middle East and Russia pressured Delta’s unit revenues during the quarter by roughly 2ppt despite a 13% capacity reduction in those particular markets.

Delta increased its capacity on Latin American routes by 15% in 4Q2014, with unit revenues falling 4.2% and yield declining 1.2%. The weak performance was driven largely by Delta cutting daily Atlanta-Caracas service from daily to weekly to offset effects of funds frozen by the Venezuelan government stemming from the country’s weak economy. Delta executives remarked that absent the cuts to Venezuela, its Latin yields would have remained flat year-on-year during 4Q2014. The commercial pacts Delta holds with Aeromexico and Gol generated USD35 million in revenue for the airline during 4Q2014.

As Delta begins to lap the service reductions to Venezuela and its own capacity growth to Latin America starts to shrink, the airline should also see some improvement in its performance on routes in that region.

Delta faces some pressure from currency depreciation in 2015

Headwinds created by the strengthening of the USD against the EUR and JPY combined with service reductions to Venezuela impacted Delta’s revenues by USD60 million in 4Q2014, and the airline estimates a USD300 million effect from the USD gains in 2015, which represents roughly one point of unit revenues.

Delta’s management highlighted a number of levers it can pull to offset currency headwinds including taking 1.5ppts out of its domestic schedule starting in Mar-2015 while making incremental additions in New York, Seattle and Los Angeles. Company executives remarked that domestic advanced yields are up significantly for the next few months, and that the capacity adjustments are a normal business process, not any reflection of demand patterns. Even as it makes some marginal domestic adjustments, Delta has not yet refined its guidance of 2% to 3% capacity growth during 2015.

The airline projects a USD200 million benefit from its joint venture with Virgin Atlantic during 2015. Combined, Delta and Virgin Atlantic will increase US-London Heathrow capacity by 10%.

Delta’s fuel expense fell USD342 million during 4Q2014; but the airline also recorded USD180 million in hedge losses that were offset by a USD105 million profit at its Trainer oil refinery.

Based on current prices, Delta projects an all-in fuel price per gallon of USD2.25 cents to USD2.35 cents for 2015, which is roughly USD50 cents to USD60 cents lower than 2014. Overall, Delta estimates its fuel expense will drop by USD2 billion year-on-year during 2015.

Airline CEO Richard Anderson stated that the best use of the fuel windfall would be continuing to pay down debt and higher levels of returns to shareholders based on board approvals. Reiterating previous comments, Mr Anderson stressed that Delta does not use lower fuel costs in its overall planning, noting it is important to use higher assumptions in order to meet free cash flow and return targets.

Even with projected lower fuel costs Mr Anderson concluded that “you plan capacity on a much more muted basis and you make sure you put strategies in place to hold yield and RASM [revenue per available seat mile]”.

See related report: Delta Air Lines aims to mirror S&P Industrials, but realises its journey is not yet complete

Delta expects its favourable cost performance – which was essentially flat for most of 2014 – to continue into 1Q2015. It projects flat unit revenue growth as it sees some effect in year-on-year comparisons from the winter storms during 1Q2014 that disrupted operations of all airlines. Roughly 2ppt of its 5% capacity increase for 1Q2015 is attributed to storm disruptions in the year-ago period. 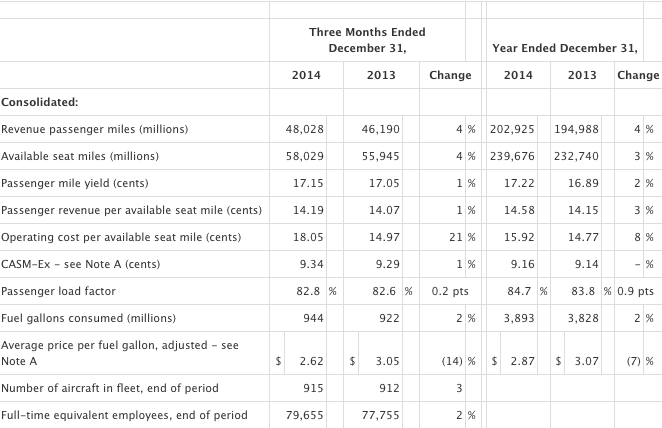 The airline did not comment specifically on pricing pressure in its markets triggered by lower fuel costs, but Mr Bastian did conclude that “there’s no question there is a correlation as fuel prices come down there’s an industry supply macro that you need to think about”. The airline does not see any specific headwinds “other than the fact that as fuel prices come down you can expect to see some pricing pressure broadly”.

Delta is starting 2015 on relatively solid footing, but acknowledges certain challenges lie ahead as it continues to revamp its Pacific operations and tame capacity growth in Latin America.

For now US domestic demand remains strong, which should help the airline weather other pockets of weakness. The biggest unknown in the domestic market is if pricing pressure stemming from lower fuel prices will turn out to be a bigger nuisance than Delta originally expected. History suggests that might be the case.

Aside from some headwinds that are now the normal course of business, Delta’s singular focus of running its business on par with top S&P Industrials remains intact. And while it admits there is much work left to be done to attain that goal, it continues to stress to the investment community it has no plans to veer off course.