North and South American airline stocks rose for another day on Tuesday (14-Sep-2010) boosted by guidance from Delta Air Lines that it expects strong results 3Q2010. The Dow (-0.2%) meanwhile slipped after a survey on expectations for the German economy fell short of forecasts, outweighing data showing a rise in US retail sales for Aug-2010.

Delta Air Lines (+5.0%) soared after stating during trading it expects passenger revenue per ASM (PRASM) to rise 15% year-on-year in 3Q2010. The carrier also expects to end the quarter with an operating margin of 12-13%, including profit sharing expense of USD170 million. Bank of America Merrill Lynch analyst, Glenn Engel, stated this is a rise from its oroginal top range of 12%. Engel stated the guidance “offers comfort that airline earnings should match expectations”. Other guidance data is as follows:

Delta Air Lines also expects unrestricted liquidity at the end of the Sep-2010 quarter to be lower than previous guidance, at USD5,600 million, due to the successful execution of USD750 million of debt reduction initiatives, from which the carrier expects USD125 million in annual savings.

The Federal Trade Commission notified SkyWest and ExpressJet (+0.6%) it granted early termination of the waiting period under the Hart-Scott-Rodino Antitrust Improvements Act, clearing the way for the acquisition of the Houston-based carrier.

"We appreciate the quick review of our filing so that we can move forward towards closing the transaction," said ExpressJet President and Chief Executive Officer Tom Hanley. "This transaction provides ExpressJet stockholders a significant premium over ExpressJet's market price prior to the announcement and we believe that the combined airline will be able to provide a stable platform for growth for ExpressJet employees after this transaction closes.” 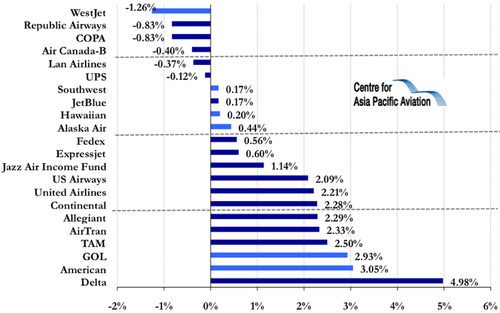