All North and South American airline stocks rose on Monday (20-Sep-2010), expect for ExpressJet (-0.5%). The carriers gained after the National Bureau of Economic Research stated the US recession officially ended in Jun-2009 and any future downturns would be a new recession, rather than a feared “double dip”.

The Dow (+1.4%) was also up on the Bureau’s comments, as well as encouraging financial and homebuilder earnings.

United Airlines (+2.1%) and Continental Airlines (+2.0%) were both up after announcing on Friday (17-Sep-2010) that their stockholders approved the merger of United with and into Continental, clearing the way for the merger to close by 01-Oct-2010.

The carriers announced on Monday that following the closing of the merger, the holding company intends to list its common stock on the New York Stock Exchange (NYSE) and open trading under the ticker symbol UAL subject to approval by the UAL Board and the NYSE. Upon the closing of the merger, the holding company, UAL Corporation, will be renamed United Continental Holdings Inc. The companies expect to commence trading of the common stock of United Continental Holdings (UAL) on 01-Oct-2010. Until that time, the common stock of UAL Corporation will continue to trade under the ticker symbol UAUA on the NASDAQ exchange and the common stock of Continental will continue to trade under the ticker symbol CAL on the NYSE. The companies have received clearance from the US Department of Justice and the European Commission, and the stockholders of both companies have approved the transaction. Continental Airlines added that stock options and shares held through the Employee Stock Purchase Plan (ESPP) will be converted into UAL stock options and shares in accordance with the merger agreement.

Delta Air Lines (+3.3%) made strong gains after Morgan Stanley reiterated its "overweight" rating of the carrier’s stock, following a recent meeting with Delta’s management. Delta Air Lines told Morgan Stanley it is encouraged by booking and revenue trends through Oct-2010, reaffirming beliefs the airline up-cycle is intact. The carrier also commented that corporate demand remains strong as its market share increases. It expects favourable business trends through to the end of this year, and year-on-year growth in 2011.

Air Canada and WestJet up on elimination of jet fuel tax 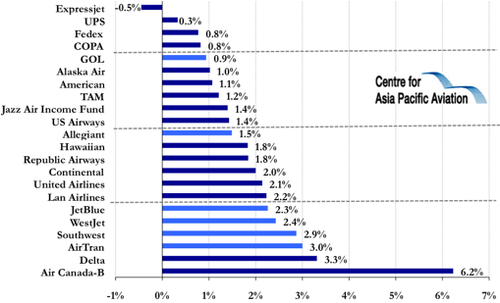