The majority of North and South American airline stocks remained down on Wednesday (25-Aug-2010), despite a slight rise in the US market. The Dow (+0.2%) gained marginally, as investors took advantage of cheap stocks in late trading.

American Airlines (-3.1%) dropped after the US' Transport Workers Union announced the day before that the American Arbitration Association accomplished the ballot count for tentative agreements for American Airlines mechanics, stock clerks and technical specialists. The results were:

American Airlines has been in negotiations with unions for a number of years. The carrier restructured in 2003 with the assistance of labour groups, which made concessions to keep the airline operating. As a result, it was able to reorganise out of bankruptcy, unlike competitors, which were reorganised under court protection. American now believes its labour costs are higher than its rivals, which were able to receive deeper cuts from their staff during bankruptcy protection. 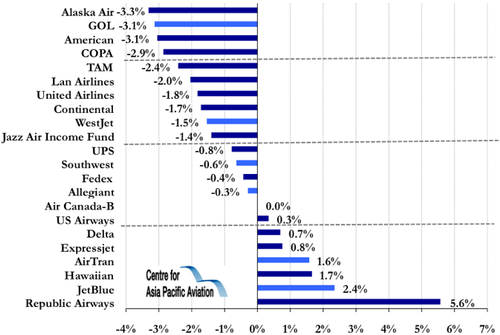