Delta Air Lines aims to mirror top S&P Industrials, but realises its journey is not yet complete

Delta Air Lines continues to structure its business to resemble top performing companies in the S&P Industrials, but admits it still has some road ahead before achieving all the benchmarks necessary to declare success.

Delta is measuring its performance against successful S&P 500 companies rather than its airline industry peers as it works to win the confidence of long-term equity investors that it can manage itself successfully through the typical cyclicality inherent in the airline business.

One immediate test for Delta and the industry at large is ensuring that not all of the benefits from the recent decline in fuel prices are passed onto the consumer to the detriment of revenues, and Delta is confident that it will not disappoint investors with irrational pricing action. Whether it has the market power to follow through will be interesting to see.

The major reason that Delta has the ability to compare itself with the top performers in the S&P 500 industrial index, is because the airline long ago realised its merger synergies with Northwest, and has used that lead time to undertake the balance sheet repair and de-levering necessary for consideration by longer term equity investors.

During the airline’s recent investor day Delta CEO Richard Anderson ticked off a list of accomplishments the airline has achieved during the last few years to inch it closer to resembling the companies it is modelling itself on.

Mr Anderson remarked that Delta has been the third best performing stock on the S&P 500 during the last two years. Its free cash flow is better than 85% of those companies, and its free cash flow yield is the third highest in that index of firms.

However, Delta’s CEO stated the airline has the second lowest price to earnings ratio among those companies, and concluded that is where its work lies for shareholders, which entails continuing to “build a durable industrial company that manages well through every cycle”. 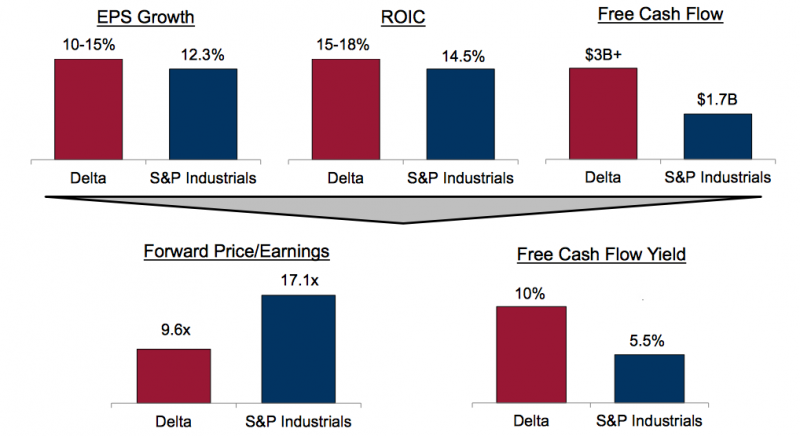 In 2014 Delta is meeting or exceeding its goals in certain financial metrics – delivering a 20% ROIC, ahead of its 15% to 18% target and above the S&P average of 14.5%. Its targets for EPS growth are also above the S&P average as Delta has concluded it is necessary to keep its performance above those levels in order to prove its mettle as a high performing industrial company. 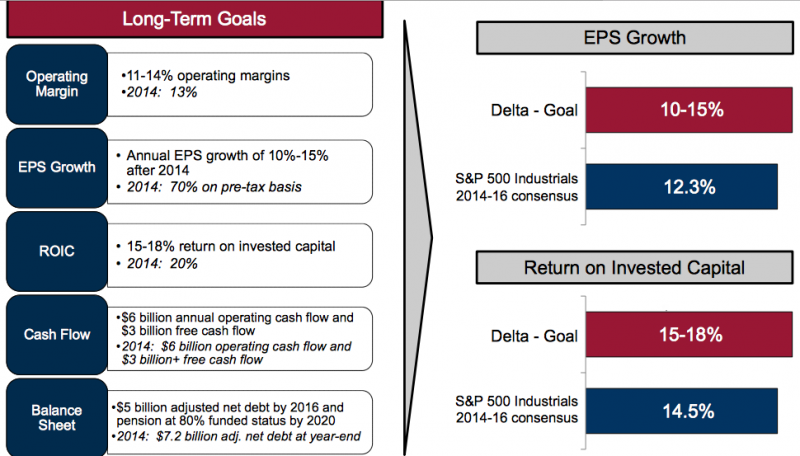 Similar to its US airline peers, Delta has also been working to reduce its leverage and improve its balance sheet. The airline has refined its adjusted net debt target to USD5 billion, and during the last two years estimates its debt reduction has reached USD4 billion.

Delta projects achieving USD6 billion in net debt by YE2015, and also estimates its interest expense will fall by roughly USD175 million. However, airline CFO Paul Jacobson remarked that even with net debt of USD5 billion Delta’s adjusted debt levels are about USD8 billion, and observed “there is more room to take that down”. 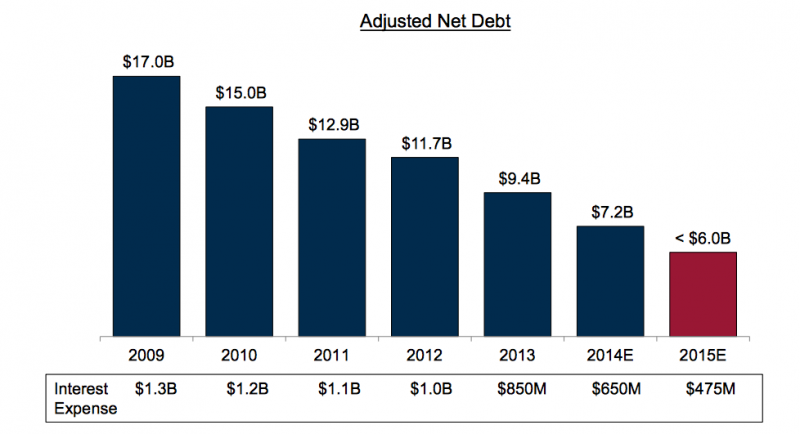 The airline is also sticking to its goal of capital expenditures between USD2 billion and USD3 billion or roughly 50% of its operating cash flow, most of which is dedicated to new aircraft coming online. Between 2015 and 2019 Delta is taking delivery of 150 aircraft.

Delta often looks to the used aircraft market for its narrowbody requirements as its peers are ordering next generation narrowbodies. It is in the midst of adding Boeing 717s exiting Southwest’s fleet and also has a history of acquiring used MD80s.

Despite having one of the oldest fleets in the world, Delta owns most of its mainline aircraft outright, which Mr Anderson believes is useful in managing the exogenous risks of the airline business. “When you own as many aircraft as we do with no mortgage you have real flexibility no matter what happens,” he stated. He used the retirement of Delta’s Boeing 747s as an example.

The airline has opted to retire those widebodies as part of a restructuring of its Pacific network, and it has estimated that the 747 retirements should improve its profitability in that geography by USD100 million in 2015.

Delta’s 2012 purchase of the Trainer oil refinery was a bold move (albeit not a great one in retrospect) to manage its fuel costs, and the facility has had fits and starts in delivering on its performance targets. But with the recent decline in fuel prices, the projected USD75 million profit for that business in 4Q2014 is actually diminishing some of Delta’s hedge losses stemming from the unexpected rapid decline in fuel. Delta’s all-in (including hedges) projected fuel price per gallon for 4Q2014 is USD2.63 cents to USD2.68 cents.

Company president Ed Bastian stated that Delta will generate a USD150 million loss from its hedge portfolio in 4Q2014, but the profit from Trainer would offset roughly half of that amount. Even as oil prices have fallen, crack spreads (refining costs) have held strong, which helped lift Trainer’s performance. Crack spread volatility was a major factor in Delta’s decision to purchase Trainer in 2012 after it determined refining expense could not be managed in a cost effective manner.

Trainer has essentially settled into the role of a lever Delta can use to manage fuel volatility, when prices suddenly rise or fall. In some ways perhaps Trainer can be viewed as a hedge against fuel hedging, blunting the effects of a quick fall in oil prices. That said the decision to go the Trainer route would probably not be supportable today, even with a substantial government subsidy.

Even with hedge losses there is an obvious upside for all airlines from falling fuel prices. Mr Bastian noted that the market outlook of fuel cost per gallon in 2015 is USD2.10 to USD2.20, a roughly 70% decline from 2014. Delta’s projected fuel costs for 2015 including hedges is USD2.40 to USD2.50 per gallon, which is below its average costs of USD2.90 in 2014.

The airline is stressing it has no plans to drastically alter its approach to hedging. Mr Anderson explained that in terms of long range planning over five years, evaluating widebody purchases or even in Delta’s annual budget cycle, “we use high fuel assumptions”.

Delta’s CEO believes using high fuel cost projections forces the company to continue to drive down non-fuel unit costs and keep capacity tight. Mr Anderson remarked that it was “wonderful” that fuel costs have dropped, and holding fare levels constant, the decline is a USD2 billion opportunity for Delta. “But over the long term horizon it is conservative and prudent to use higher fuel assumptions, then when it comes in lower we can hang onto all of it”.

Mr Bastian believes hanging on to benefits of lowered fuel costs is a test for investors obviously concerned that airlines will pass on savings from lower fuel prices in the form of lowered fares, which could dampen revenues.

Delta’s president concludes that the airline needs to be paid for its product, ensuring it gets paid for its premium offerings and its new customer segmentation approach underpinned by four new fare families that include a fairly restrictive basic economy option, main cabin, Delta Comfort plus and Delta One/First class.

The new categories have received a mixed reception, with suggestions of little more than cosmetic and branding changes. Like much of the established US airlines' inflight products they still lag well behind the top international standards; but Delta in its quest to prove to investors it will not act irrationally in a lower fuel cost environment, wants to make certain that “people don’t see our pricing strategy or product as a commodity”, said Mr Bastian.

For roughly the last three years Delta has reaped the benefits of the competitive gap it holds against its peers due to its successful merger integration. But its peers American and United are working hard to build their businesses to compete with Delta on equal footing, something likely not lost on Delta’s management.

Despite the success Delta has achieved in working to change its business to mirror the top performing companies in the S&P 500 Industrials, the airline rightly concludes that there is still much work to be done in convincing long term investors that US airlines are a sound investment.

Until that formidable task is complete, Delta realises it cannot claim victory in achieving a complete turnaround of its business.