Airports have become increasingly accustomed to risk analysis. But there are limits to the amount of commercial control airports exercise over their future.

This piece is taken from the Oct-2010 edition of Airline Leader. Click here to view and subscribe to the full publication.

AIRPORTS HAVE BECOME INCREASINGLY accustomed to risk analysis. Generally however this is about operational and security concerns, where templated scrutiny can be applied. There is little formal guidance when it comes to managing how to assess and manage purely commercial threats.

Like it or not, airports are today very much in the airline business, with all its vagaries and uncertainties. Also, since highly mobile low cost airlines started being more aggressive in their demands, most airports are also in the uncomfortable position of having to compete with others. Many managements are still much more attentive to planning and administering real estate – for which they are usually better equipped – than to getting to grips with understanding how the airline business ticks; and just how volatile it can be, a matter which goes straight to the bottom line. This attitude is changing however, as airlines go broke, merge, cut back on – or expand – service, or merely adjust operating strategies, like Ryanair in Europe, as airport charges and government taxes encourage it to move out of Ireland and the UK.

There are limits to the amount of commercial control airports can exercise over their future; but establishing the main risk points offers a way at least of recognising warning signals – and of assessing the strengths and weaknesses Aof their competition.

AS DEFINED BY THE UK'S REGULATOR of Air Traffic Service, risk is "the combination of the probability, or frequency, of occurrence of a defined hazard and the magnitude of the consequences of the occurrence". Thus a commercial risk that is minor might occur frequently; bad weather would be one such high risk/low impact event. However, if for example an airport is dominated by a single airline, the possibility of that airline ceasing to operate or substantially downsizing may be relatively small – but the impact would potentially be major. 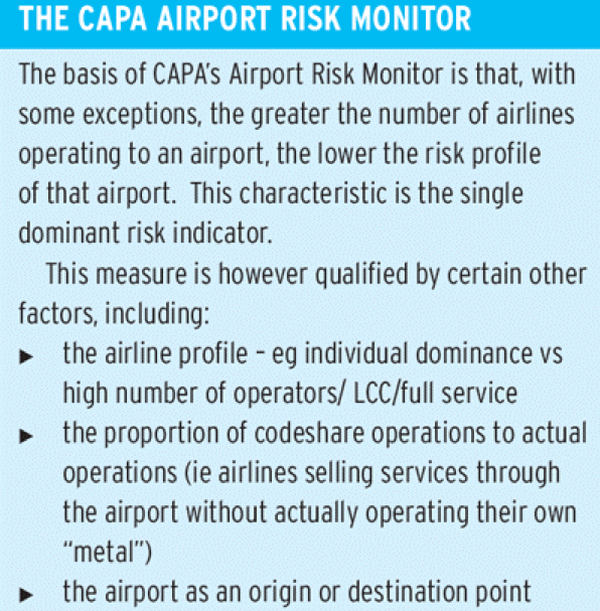 International gateway airports have typically been dominated by a home "flag carrier". Similarly, in domestic US operations, hub airlines attempt to dominate their home airport. For an airport, this could be a source of concentrated risk: in dealing with a dominant airline its negotiating power is reduced. Also, the potential failure, merger or restructuring of that airline could have a proportionately significant impact on the airport's activities and revenues. Until recently, those possibilities were remote. Today they have become much more likely, albeit still not common.

Similar dependency problems also occur with smaller airports, where one or two airlines occupy the majority of throughput capacity. Here the probability/magnitude risk equation can be threatening, as many smaller airports have learned, as a high growth low cost airline has grown quickly, then withdrawn for one reason or another.

When industry deregulation and liberalisation spread, the dominance of flag carriers at their home base(s) typically reduced, as a variety of new airlines was provided with regulatory approval to operate. 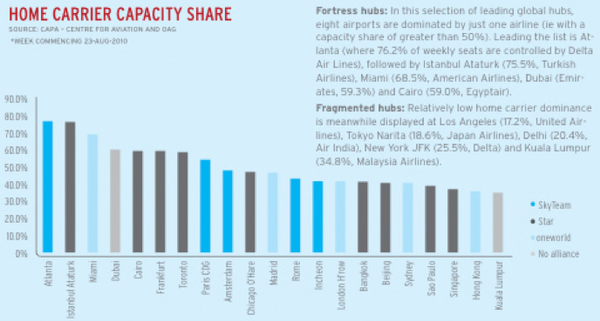 The home carrier capacity share graph shows those major airports at which one airline has substantial market presence. For added interest, the bars are colour coded to show which global alliance is involved at each airport (note: the percentage however relates only to the home airline, not to all alliance partners). Of these airports, only Dubai and Kuala Lumpur are not dominated by an alliance airline.

This is a complex interpretation. However, issues that are relevant in terms of durability include the airlines' sizes, their competitive strength and stage in their growth (or contraction) cycle, the significance of the airport in their operations, whether they are point-to-point or network carriers, their financial position, their alliance/codeshare relationships, and others.

Other factors necessarily come into play. For example, a low yielding, leisure-reliant airport may be more at risk where long haul operations are involved and economic conditions deteriorate, causing service withdrawal. Alternatively, it may be that low cost short haul operations will actually perform well in such circumstances. Basically a higher yielding airport – that is one which carries a substantial amount of business traffic – will be more durable for long-haul operations.

The proportion of codeshare operations to actual operations contains a mixed message; it can imply several things. A codeshare reduces (or "shares") the risk profile of a city pair or other route for an airline. The degree to which this applies depends on the nature of the 140 codeshare, but it should normally make the 120 joint operation more stable. For an airport, these codesharing airlines (ie who are not 100 flying their own metal) are often valuable to cultivate, as they may be candidates for expansion in their own right.

The adjacent graph addresses the headline issue of numbers of airlines serving key airports, both with their own aircraft and in codeshares.

As illustrated, Paris Charles De Gaulle Airport has the greatest total of operating and non-operating (ie codeshare) airlines, with 123, according to OAG schedules. Frankfurt International, Rome Fiumicino, Dubai and Barcelona round out the Top Five. These airports enjoy a highly diversified (ie lower risk) carrier portfolio, although have the added complexity of accommodating a large number of airlines.

Of the Top 40 in this category, 25 airports are in Europe, eight are in the US (thanks to the impact of codesharing and influence of global alliances), five are in Asia, with one each in the Middle East (Dubai) and Africa ( Johannesburg).

It is only in the past decade that volatility in the airline industry itself reached levels that challenge the viability of airport operations. The aviation industry has always been susceptible to external threats, from volcanoes to tsunamis, from terrorist attacks to bird flu. There are only very limited options for dealing with those effects. Airports have little more to do in most cases than simply react. But, as airline market entry - and exit - have become more common, the benefits of being pro-active can both add revenues and minimise the impact of airline decisions that undermine revenues. In these circumstances, assessing risk levels can help both to maximise the upside and minimise the downside.

AIRPORTS WITH HIGHEST NUMBER OF AIRLINES 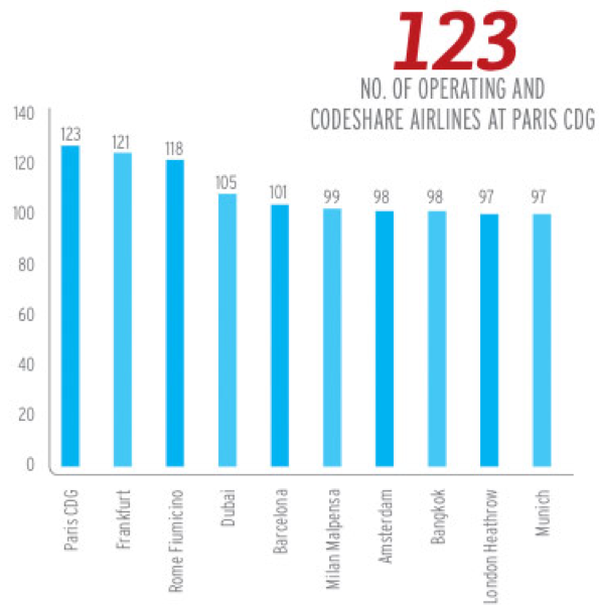 Cleveland Hopkins Airport has the greatest ratio of non-operating (ie codeshare) airlines to total airlines at 80% (or 36 of a total of 45 airlines), according to OAG schedules. Nine of the Top Ten are in the US (Aberdeen in Scotland ranks ninth), as are 30 of the Top 40 airports globally. Auckland ranks 20th globally, with a ratio of just under 53%. 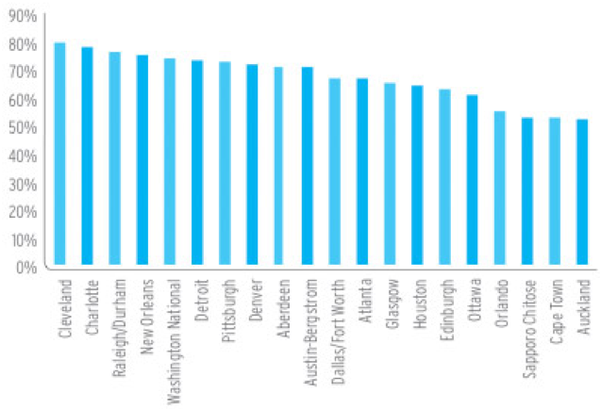