While inertia, rising COVID case numbers, quarantines and lockdowns strangle attempts to get people back in the air, the great and good have attended (in-person or virtually) the annual World Economic Forum at Davos in Switzerland in the last week of Jan-2021.

The lack of any substantial discussion there of the ever-deepening crisis for aviation that is COVID-19, and how to get out of it, raises the question of who can formulate a global policy to achieve that aim. Individual countries, run by politicians concerned with their ‘legacy’ and driven by national self-interest, are not going to rise to the challenge; nor, apparently, are collections of states like the European Union.

The only remedy must surely come from the United Nations and its agencies, in league with knowledgeable aviation and tourism organisations.

This report examines some of the questions those bodies should be - but aren't - answering.

The big decisions are made at Davos more than anywhere else

The annual meeting of The World Economic Forum, commonly known as ‘Davos’, took place in Davos-Klosters, Switzerland, at the end of Jan-2021 – partly live in situ, and partly virtual.

The non-profit organisation’s aim is to "engage the foremost political, business, cultural and other leaders of society to shape global, regional and industry agendas", according to its website. Numerous business leaders, more than 50 heads of state, and a handful of ‘celebrities’ typically attend the meeting, and in 2019 the programme featured big names on the world stage.

But for all its perceived glamour, the total closure of the town to anyone who does not have an invitation, and the array of business jets which ferry the delegates to and from the venue (the closest commercial airport is 100km away, in fact), what is discussed at Davos can have an impact well beyond what any individual country, or associations such as the United Nations, can do.

Global trends are shaped by the rich and powerful more than by nations and blocs such as ASEAN and the European Union. And the most impactful discussions at Davos are said usually to happen after hours, rather than during the 140 sessions; that is when the ‘networking’ starts among ‘Fourth Industrial Revolution’ technocrats, financiers, industrialists, celebrities, royalty and the Hollywood A-set.

In most cases, this is an unholy - or at least usually inhospitable - alliance where the commercial air transport industry is concerned.

‘Policy session’ talked greatly about emissions, but little about the impact of COVID-19

The airline industry has been represented at this year’s event.

What did they talk about? Mainly the transition towards a decarbonised ‘net zero emission’ future and how in a ‘post-COVID’ world (is anyone able to say for sure when that will be, even if it will be?) potential structural changes ahead could result in different aviation business models, platforms, and diversified products and services being needed to meet the expectations of post-pandemic leisure and business travellers in the “new normal”.

Nothing about what to do to tackle the crisis in the industry right now, while the pandemic rages threatening tens of millions of jobs in transport and tourism – not the least right outside the venue doors in Switzerland, where active cases are at their highest-ever level and seat capacity in the first week of Feb-2021 stands at just 13% of what it was in the comparable week of 2020.

Or in Mr Shapps’ UK where an existing mutation is now being further mutated by the South African one and has already spread to Spain. It is hard to credit that the conference’s theme this year is ‘A Crucial Year to Rebuild Trust.’ 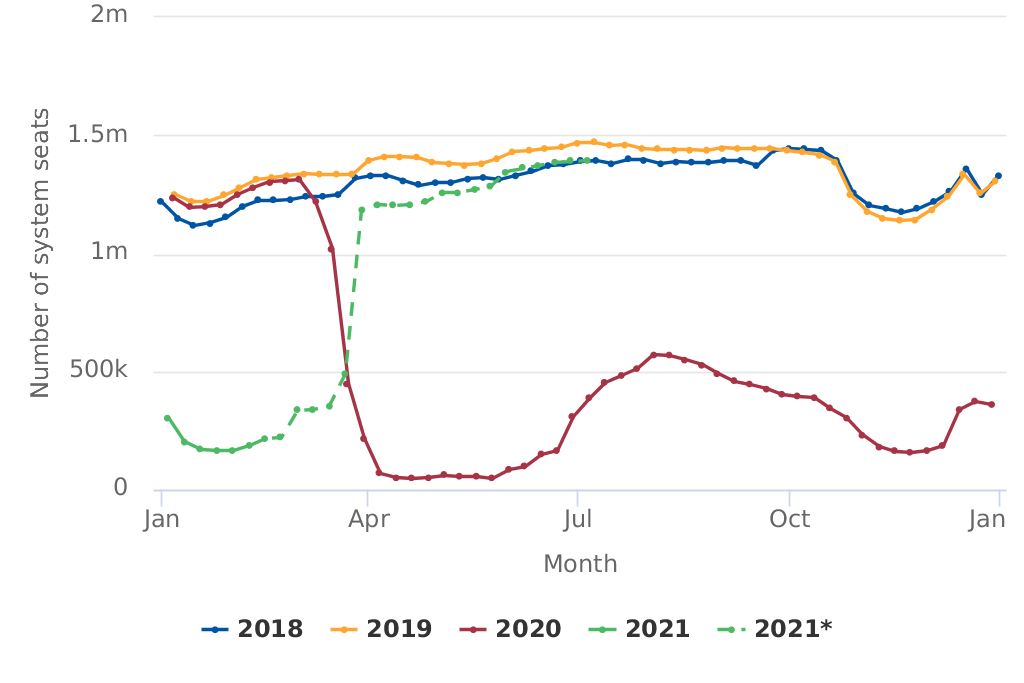 Note: The dotted green line, six months from 01-Feb-2021, is predictive and subject to change.

ACI steps up to the plate, demanding global harmonisation of standards and processes

At least Airports Council International (ACI) World Director-General Luis Felipe de Oliveira made some salient points, on another panel (‘Restoring Cross-Border Mobility’), when he said that cooperation on global standards towards a global harmonisation of processes would help promote industry recovery from the COVID-19 crisis (even if he did choose clichés such as “seeing the light at the end of the tunnel” to express it).

Mr de Oliveira said there were some signs for optimism, but that the industry is “braced for” 1H2021 as the situation will "get worse before it gets better this year". ACI expects to see "light at the end of the tunnel with the development of vaccines and by using tests to reduce quarantines" around Jun/Jul-2021.

He added that there is "no way that there will be zero risk", but cooperation on global standards towards a global harmonisation of the travel process "will help to get us out of this crisis", and vaccines and tests "need to be used as a tool". Mr. de Oliveira also stressed the importance of harmonisation of – and interoperability between – health passes being developed to help ensure global consistency.

He continued: “Millions of jobs are at risk, the economic downturn is at risk of getting worse, but aviation will play a key role in recovery. The industry lost USD112 billion last year and we lost 65% of expected global passenger traffic. International traffic is not expected to recover before 2024 and 2025 (in some markets later than this). There are some good developments in domestic markets with some recovery, but international traffic is still at a standstill.”

“Aviation is a global business”, he said, “and we need to have a global perspective. We are willing to collaborate and work together with the World Health Organisation (WHO), ICAO and International Air Transport Association (IATA) in our global standards for the industry.”

He added, “this will give passengers and states faith that we are doing the right thing to recover.”

It is rather unfortunate that Mr de Oliveira was not on the same platform as ICAO because he appears to have been the only delegate hitting the nail on the head (he was sidelined, along with the Prime Minister of Aruba, the Canadian Health Minister and others on a ‘Travel and Leisure’ panel).

The pandemic could make the industry as irrelevant as fax machines

The aviation industry faces a crisis the likes of which it has never experienced before, even in wartime.

There is the very real prospect of it becoming as irrelevant as floppy discs, camera film, dial-up Internet, movie rental stores, Betamax and VHS, and fax machines.

Even if it were to emerge from this reasonably intact, the industry faces the ultimate challenge – the ‘net zero emission’ future, which means the massively indebted airlines that remain will have to find alternative ways of making planes fly and make money out of it, and probably before 2030.

To attract the public back on board aircraft, operators must understand that (the example here is from the UK), most people now cross the road rather than bring themselves into even fleeting, passing two-metre, open air contact with another human being. And then cross it back again when they see another one coming. Suburban streets are deserted throughout the day and night apart from delivery vans and dog-walkers; equally supermarkets, where there may be only two check-out desks open in a 5,000sqm store on a Saturday afternoon to handle the paltry number of shoppers.

The future travellers – children – think the pandemic is here to stay

According to a radio report, schoolchildren in the UK are internalising the belief that the lockdown will never end, and that even if it did (a) they would still not be safe, and (b) lockdowns will keep coming back, forever.

Children are, or were, the future travellers. And their resolve to fly had already been substantially undermined by the growing profile of world ‘climate change’.

Most adults are extremely wary of all of the following, and say they will not do any of them unless and until they are 100% certain of their “safety”:

If people won’t mix on the ground, why would they do it in the air?

Public trust in other human beings is totally lost. Under these circumstances, what hope does the air transport industry have of a return to any sense of normality?

That people who do not absolutely need to travel will be prepared to board an aircraft and sit next to, or close to, or behind, or in front of, an individual who might not even know that he/she is infected with COVID-19, or put themselves at risk of being infected, for example, from the lingering effect of a passenger’s sneeze into the seat back in front of them, on a previous flight?

Global organisations must seize the initiative

It behoves organisations at the very pinnacle of global administration to step up to the plate themselves, because the only discernible reaction from them at present is non-reaction; or rather, inertia, to put it another way.

Meanwhile, the efforts that individual governments are making to tackle the problem are at best sporadic, piecemeal and uncoordinated, and most worrying of all – parochial, as is most evident with lockdowns and quarantines.

The lack of cooperation is epitomised in this recent CAPA news item:

‘IATA urged all branches of the EU government to support an initiative from Greece's Prime Minister Kyriakos Mitsotakis to agree a common digital European COVID-19 vaccination certificate and adopt the initiative for all member states. The certificate would enable those who are vaccinated to travel freely within Europe without COVID-19 testing.

"The requirement for a harmonised safe aviation restart is more urgent than ever in the face of renewed lockdowns and travel restrictions across the world", IATA continued.’

So, that is the aviation industry organisation (which represents the majority of the world’s airlines), asking a political organisation, which cannot order individual member countries to open or close their borders, to follow the example of one of its member states. IATA is in the position of having to ask this organisation to adopt one initiative and recommend it to their members.

And that is just in one part of the world, when this is a global pandemic. An attempt to kick-start a response by Greece, yes, but still inadequate.

Clearly what is required, urgently, is for global organisations to take the lead, and quickly. Individual countries are clearly not going to do it; their politicians are terrified of being the ones blamed for deaths when the day of reckoning comes, and it is tempting to suggest that what interests them most of all (at least in the democracies) is staying in power by not taking any risks.

The UN can call an emergency session over (military coup d'état in) Myanmar, but not COVID-19?

Indeed, it is pertinent to ask the question, why is the United Nations not in emergency session on COVID? The situation in Myanmar, heinously anti-democratic though it might be, hardly has the global impact of a million deaths from COVID. For all the good work the UN does, what is it for, if it is not able to rise cohesively to a global challenge like COVID-19 and unite the nations to a consistent response?

The United Nations has two special agencies that are pertinent to this challenge; the World Health Organisation, obviously, and ICAO. (Arguably, the World Tourism Organisation [UNWTO] as well).

It is incumbent on each of them to work together to return global air transport to its pre-COVID status as quickly as possible. If they are not working together, why not? Who else is going to do it?

A universal exit strategy is essential

Those organisations need to devise a fully documented health/aviation pandemic exit strategy that can be applied globally, along with a rigidly adhered-to timescale.

Specifically, they should be informing the world:

For the next CAPA Live online virtual summits (10-Feb-2021 and 10-Mar-2021) we are attempting to secure leading panellists from some or all of the organisations mentioned here (ICAO, WHO, IATA, ACI, UNTWO) to discuss these issues.