Europe’s largest LCC plans to base two aircraft at the airport and launch 14 news routes for a total of 17 routes and 63 weekly services from the airport. Ryanair’s shares were also down yesterday, by 3.0%, with easyJet also weaker, down 2.6%.

SkyEurope's shares slumped 6.7% yesterday, on news that the carrier has until 14-Aug-09 to pay outstanding invoices after Flughafen Wien temporarily grounded its services on 11-Aug-09. If the carrier, which two weeks ago signed two separate financing agreements to provide additional liquidity for its operations, fails to repay its debts, all its services at the airport will be suspended.

Vueling's shares were also down, by 1.1%, despite news the carrier’s Jul-2009 passenger traffic topped 1 million (+77.9% year-on-year) for the first time after the group's merger with Iberia's low-cost subsidiary, clickair. Load factors also improved, up 0.6 ppts to 77.9%.

In the Americas, JetBlue gained 4.3%, as FTN Equity Capital raised its rating on the stock from “neutral” to “buy”, citing better-than-expected traffic between the US and its expanding Caribbean markets. According to FTN, "JetBlue's profitable market development has allowed it to return to a growth mode sooner than other airlines." Southwest's shares also gained yesterday, up 0.5%.

In the Asia Pacific, Virgin Blue's shares jumped 5.3%, reflecting stronger conditions in the Australian share market. In other positive news for the LCC, United Airlines stated it has not taken a position for or against Delta Air Lines and V Australia’s proposed Pacific JV, stating it had asked only that the Australian Competition and Consumer Commission give a “thorough review of the application to ensure all market participants have the opportunity to compete on a fair and level playing field". 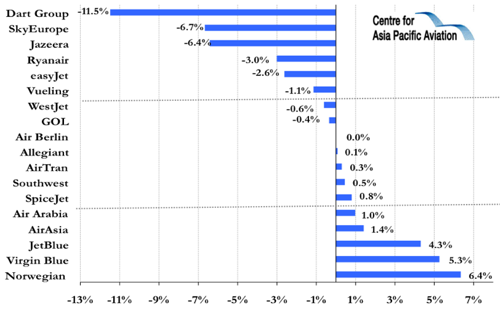