The Danish Government stated it is prepared to sell its 14.3% stake in SAS if presented with a satisfactory offer from an investor, taking a similar position to the Swedish Government, which had earlier stated it would seek parliamentary approval to reduce its stake in SAS at a “suitable point in time”.

The Norwegian Trade and Industry Ministry has also expressed a similar opinion to its Swedish and Danish counterparts, stating it would be open to a sale “when the time is right and we can get a good price”. Denmark, Norway and Sweden have a combined ownership stake of 50% in the struggling carrier.

The governments are considered unlikely to sell their stakes for another 12-18 months, to support the carrier through the implementation of its cost cutting strategies.

Sweden had previously indicated it was willing to reduce its 21.4% stake, but Norway had not yet shown any interest in cutting its share of the airline.

easyJet (-0.5%) slipped after being downgraded from ‘Buy’ to ‘Neutral’ by UBS. See related article: UBS prefers Ryanair to easyJet; 28% decline in Brazil domestic airfares in 2009

Aer Lingus meanwhile continued to decline ahead of plans to launch its staff ballot over its EUR97 million cost cutting plans. The carrier admitted in regard to the ballot over the weekend that it has a “hard sell” ahead. The cost cutting plan includes 600 redundancies, pay cuts of up to 10% and a three-year pay freeze. 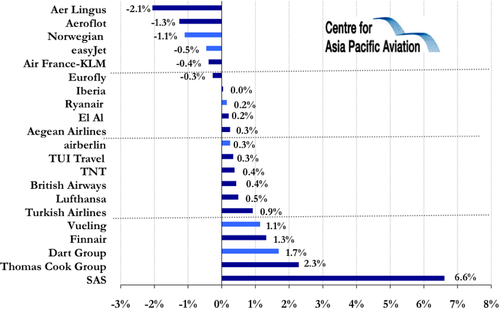