Small orders, anonymous buyers and returning customers expanding deals were the running themes for the Bombardier CSeries at the 2014 Farnborough Airshow.

While Bombardier did not rack up headline orders like the larger manufacturers, it still managed to win commitments and firm orders for 63 CSeries aircraft.

There now appears to be sufficient oxygen in the prospects of meeting Bombardier's own target of 300 CSeries orders before the aircraft enters service.

Despite the disappointment of the engine test-necessitated grounding preventing the aircraft from flying at Farnborough, Bombardier remains optimistic about the aircraft and its prospects.

The Farnborough orders have been enough to push Bombardier past 200 firm orders for CSeries. It has also engendered enough confidence in the manufacturer that it is maintaining its firm order target for 300 aircraft before the CSeries enters service in 2H2015.

As of 16-Jul-2014, the CSeries has 203 firm orders from 16 customers, as well as another 95 commitments and conditional agreements from eight more customers.

Falko commits to 24 CSeries ahead of Farnborough

The ordering for the CSeries actually started several days before the start of Farnborough, with UK-based lessor Falko Regional Aircraft Limited signing two letters of intent (LoI) for up to 24 CSeries aircraft. Both were for the CS100, the smaller of the two-aircraft CSeries family.

Falko is the fourth lessor to purchase the CSeries, along with Ilyushin Finance Co, CDB Leasing Co and Lease Corporation International. Falko is a specialist in the regional aircraft market, offering commercial aircraft leasing, financing and management.

The lessor’s LoI is indicative of the cautious interest in the CSeries. Falko is a specialist in the regional aircraft market, offering commercial aircraft leasing, financing and management.

The promise of a clean sheet design offering 20% improvements in fuel burn and a 15% reduction in cash operating costs is attractive to airlines and lessors looking for modern, efficient aircraft. However, the appeal of the aircraft is tempered with concern about Bombardier’s ability to deliver on its promises and execute the project. The company is stepping into unfamiliar territory, departing the regional jet space into the 110-150 seat market space, territory once occupied by recently vacated Airbus and Boeing.

Chinese customer got Farnborough off to good start for Bombardier

Another major tentative deal for the CSeries came on the first day of the airshow, with Chinese start-up airline Zhejiang Loong Airlines (Loong Air) signing a letter of intent to acquire 20 CS100 aircraft. The deal for the aircraft would be worth USD1.28 billion at list price.

The Loong Air order, if confirmed, is potentially the first firm order success for the CSeries in China. CBD Leasing, a unit of the China Development Bank, has already made a conditional purchase agreement 15 CSeries, although the deal, signed in Oct-2013, has yet to be converted to a firm order.

Also joining the ranks of tentative new customers is Jordan’s Petra Airlines, which signed a LoI to acquire up to four CS100s and CS300s. Should the LoI be converted to a firm purchase agreement, the transaction would include two firm-ordered CS100 aircraft and two options for CS300 aircraft. Based on list prices, for two CS100 aircraft would be valued at approximately USD136.5 million, increasing to USD298.4 million if the two options for CS300 aircraft are converted to firm orders.

Petra Airlines is not alone in the Middle East in ordering the CSeries. The Dubai-based Falcon Aviation Services signed a firm purchase agreement for two CS300 aircraft confirming a LoI to acquire one CS300 aircraft converting an option into a firm sale. The initial LoI was announced in Feb-2014, making Falcon Aviation Services the first customer for CSeries aircraft in the UAE.

The CSeries has proved quite popular with airlines in the Middle East, accounting for 33 of the 203 firm orders and 22 of 95 purchase commitments. Gulf Air ordered 10 CS100s in 2011 and Iraqi Airways ordered 16 CS300s in 2013. Al Qahtani Aviation Company has also ordered 16 CS300s for SaudiGulf Airlines, which is due to commence operations in 1Q2015, initially with Airbus narrowbody equipment.

Outside of the new customers, several existing Bombardier customers have expanded their commitments for the CSeries. One existing CSeries customer placed a conditional order for seven CS300 aircraft valued at a total of USD553 million, along with purchase rights for six more aircraft.

Bombardier stated that it has already allocated production slots for the seven aircraft and it expects that the order will be firmed up once the customer’s board approves the purchase.

Bombardier also announced a LoI for five CSeries aircraft from an African airline and existing Bombardier customer, which wishes to remain unidentified at this time. At list price the deal would be valued at approximately USD365 million, indicating the LoI is for the larger CS300 aircraft.

The deal, when finalised, will be the first for the CSeries in Africa. Bombardier sees great promise in the African market, with the growth in the African aviation market – driven by economic growth, growing populations, increasing urbanization and the emergence of a middle class – making the CSeries an excellent aircraft to pioneer new routes and thicken existing markets served with smaller, older regional jets.

Since the beginning of 2014, Bombardier has seen 28 firm orders for the CSeries, as well as 51 purchase commitments. While Bombardier has not enjoyed run-away sales success that Airbus and Boeing have enjoyed with the A320neo and the 737 MAX – which now have more than 5500 combined orders and commitments – the CSeries is building some order success. 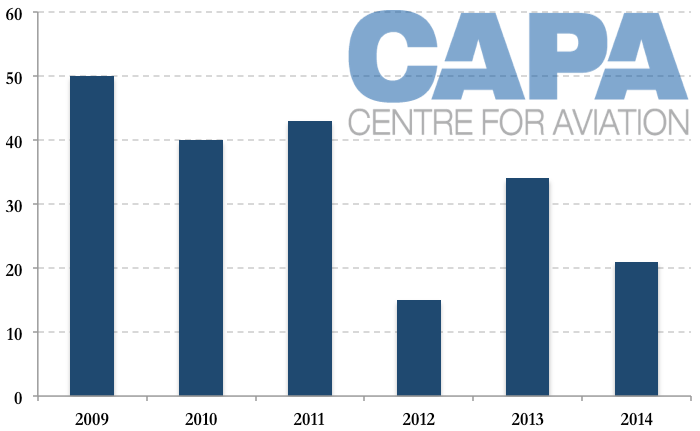 Boeing and Airbus have abandoned the market segment due to lacklustre sales, and are instead pressing ahead with higher density seating configurations for their soon to be introduced next generation narrowbodies. Both manufacturers have noted airlines are increasingly opting for the highest capacity versions of their narrowbodies.

During the release of its Current Market Outlook, Boeing Commercial Airplanes VP, marketing Randy Tinseth stated: “Based on the overwhelming amount of orders and deliveries, we see the heart of the single-aisle market in the 160-seat range” and there is “no question the market is converging to this size, where network flexibility and cost efficiency meet."

The CSeries family aircraft are oversized for many regional and feeder market routes – typically operated with 70-100 seat regional jets – but may not have sufficient capacity for larger, mainline markets. The CSeries is a halfway house between new regional jets such as the Embraer E-Jets E2 and the Mitsubishi Regional Jet and the reworked narrowbodies of Airbus and Boeing. It may be unlikely to sell 1,000 aircraft, but there is probably sufficient of a niche – and helpful lack of interest from larger competitors – to tip the balance to profitability.

If Bombardier can convert the 95 CSeries conditional orders and commitments into firm orders over the next 12 months, it should have a reasonable prospect of meeting its target of 300 CSeries orders before the aircraft enters service.

With building airport congestion, sustained high fuel prices and airline economics driving average aircraft capacity up, there is a space for the CSeries in the market.

Now Bombardier needs to get the aircraft back into the air and allow customers and potential buyers to see that the aircraft’s economics speak for themselves.