As the COVID-19 coronavirus quietly emerged from the shadows in Wuhan and the news started to spread, CAPA's analysis shows airline searches ("shopping") closely tracked its development, as illustrated in 3Victors data.

IATA director general and CEO, Alexandre de Juniac, said on 24-Mar-2020 that "the airline industry faces its gravest crisis”. The same applies to most facets of the travel and tourism sector.

As much of the world has gone into lockdown, a steady decline in travel searches across the major GDSs could have been expected. Mostly that has been the case, but CAPA's analysis of searches recorded by the travel big data technology company, 3Victors, shows some interesting trends, where travel searches have spiked exponentially at key times as the pandemic has spread across the globe.

The pandemic’s spread highlights how the coronavirus crisis has influenced travel searches for flights, based on this data.

In Dec-2019  the first confirmed cases of the new virus were recorded by Chinese health authorities. There are claims that the virus may have first emerged a month earlier, albeit no scientific research or epidemiological link has been made to the wider pandemic.

Half a dozen confirmed cases were recorded in the Wuhan area of China during the first half of Dec-2019, including 57-year-old Wei Guixian, a seafood merchant working at the Huanan Seafood Wholesale Market, who is now being put forward as the potential ‘patient zero’.

In the final days of 2020 similar cases, all from the Huanan Seafood Wholesale Market, were recorded. This identification of what was then described as an abnormal situation was reported to the Chinese Center for Disease Control and Prevention, and on 31-Dec-2019 to the World Health Organization (WHO).

At this stage, little about the medical tsunami that was about to hit the world was known outside Wuhan, China’s tenth largest city and one of its main high-tech, education, and financial centres, or beyond the wider Hubei province, in which Wuhan is located. At this time, demand for travel - and travel search - to China from the rest of the world remained strong, with the Chinese New Year holidays fast approaching - good cause for local politicians to want to cover up the dangers.

After formal confirmation that a new coronavirus had been detected on 08-Jan-2020, the first potential case outside China was reported in South Korea. New cases were reported in Thailand and Japan, as well as other parts of China, over the subsequent week, as the first fatalities directly attributable to the virus were recorded.

CAPA’s corporate travel publication, The Blue Swan Daily, reported at this time that the wider world was now becoming more aware of the virus, and by the end of the month cases had also been recorded in Hong Kong, Macau, Australia, Singapore, Malaysia, Sri Lanka and Cambodia; even as far afield as Canada.

At this stage, travel searches highlighted no obvious changes in consumer demand. The Chinese New Year holidays were imminent and interest was strong.

However, this changed on 22-Jan-2020 when Chinese officials announced the quarantine of the greater Wuhan area, to begin on the morning of 23-Jan-2020. The news spread quickly. 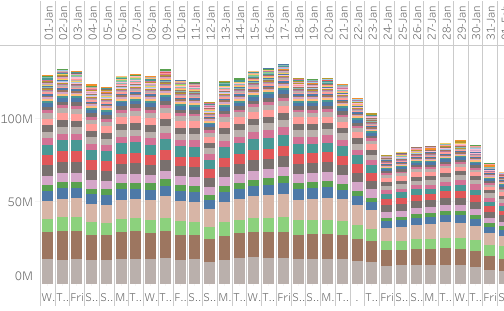 At that point an obvious decline in interest to travel to China is evident from the 3Victors data. In fact, the volume of searches almost halved following Wuhan's lockdown.

It was a similar story with the outbound China market, a group of travellers that destinations across the world had been fighting to attract for the previous years and for many, now a key inbound tourism market.

One example is Australia, where China had become its largest inbound market by volume and – by a long, long way – economic value, accounting alone for more than a quarter of the international visitor spend.

When Wuhan went into lockdown, travel searches from China to Australia followed a similar downward trajectory. 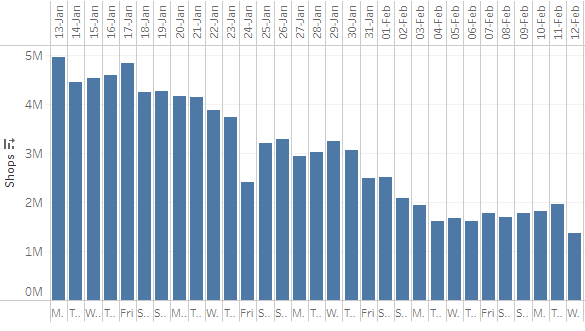 Airlines across the world were already suspending flights into China, and Hong Kong’s vicinity and border with mainland China meant that it was being hit particularly hard, with Cathay Pacific forced to make significant cuts to its operations as the decline in public confidence inhibiting travel demand.

But it was not alone, as by the end of Jan-2020 WHO had declared the outbreak a global emergency, after the number of cases had spiked more than tenfold in a week and had started to take hold in other parts of the world.

While the world’s attention was focused on the Diamond Princess cruise ship quarantined at a Japanese port, where confirmed cases were rapidly accelerating, the coronavirus spread was making its journey across the world due to a highly contagious and symptom-free five-day period following infection, which was also facilitated by the world’s enhanced global connectivity.

China’s lockdown in Wuhan had been swift, but had not been quick enough to limit mobility during the embryonic stage of the viral infection, and new cases were being reported in an increasing number of locations. These included examples across Europe, but it was Italy that was to become the epicentre of the continent’s outbreak.

The virus was first recorded in the country on 31-Jan-2020, when two Chinese tourists in Rome tested positive. The Italian government suspended all flights to and from China and declared an immediate state of emergency.

But by early Mar-2020, eleven municipalities in northern Italy were identified as centres of two main Italian clusters of the virus and were placed under quarantine. The majority of positive cases in other regions actually trace back to these original clusters.

Italy quickly came to record the highest number of fatalities (now overtaken), despite Prime Minister Giuseppe Conte quarantining most of the north of the country from 08-Mar-2020 and subsequently closing all non-essential businesses and industries, with additional restrictions to the movement of people from 21-Mar-2020.

...but travel searches to Italy took some time to decline

The 3Victors data shows that as a destination Italy had seen little impact on travel requests, except for a small general reduction after Wuhan was placed under lockdown.

That trend continued to the end of January and midway through February, before returning to previous levels from the week commencing 16-Feb-2020 as the Lombardy outbreak became apparent in the north of the country. The volume of searches subsequently shows a decline, as expected, as cases and fatalities have risen.

As the world progressed into Mar-2020, and with the virus now officially named as COVID-19 and formally declared a pandemic by WHO, its spread had become truly global, and governments across the world began to take aggressive action to reduce its spread to maintain sustainable national health provision. Alongside social distancing and isolation policies, many also included implementing temporary visa entry restrictions, and in numerous cases issued regulations restricting all international visitors.

It was President Trump’s declaration on 12-Mar-2020 that the United States of America was closing its border with the Schengen members of the European Union from 13-Mar-2020 that was perhaps the strongest stance at the time.

Just days later it was also extended to include the United Kingdom and the Republic of Ireland, limiting air connectivity on one of the world’s busiest, and most lucrative air corridors.

Travel searches: all countries to USA

This was one of the key moments in the pandemic from a travel perspective but interestingly, in the days leading up to the announcement global travel requests for flights to the USA had been peaking to year-high numbers - most likely explained by citizens making flight searches to check or book options to travel back home as the intensity of the coronavirus spread continued.

US Domestic travel searches peaked on 12-Mar-2020, the day of the Schengen announcement

The north Atlantic market move was both an international phenomenon, facilitated by the government’s travel restrictions, but also apparent in the US domestic market, where travel requests peaked on 12-Mar-2020, increasing almost a third (31.9%) on the level the same day of the previous week.

A closer look at the 3Victors data highlights that this time represents a key period for travel searches. It appears that this is when it was accepted that COVID-19 was going to envelop most of the world and that the lockdown that was introduced in Wuhan would be replicated to different degrees in cities across the rest of the world. Air demand was not now being limited just by public confidence, but also by heavy travel restrictions.

Just like the peak in the US domestic market, international repatriation started to cause spikes in travel requests on many country pairs. Over recent weeks the airlines still flying have been mainly facilitating the return of citizens. Qatar Airways has even expanded its flight schedules to support this short term peak in demand.

It is regularly reported that the UK-USA market is home to the only billion dollar air route for any of the world’s airlines – that is British Airways’ London Heathrow-New York JFK route.

Now, with much of the world’s population in some form of isolation, voluntarily or involuntarily, and social distancing – are there any positive signs?

China has started relaxing restrictions domestically and allowed limited freedom to the population of Wuhan. As travel request data shows, there was a significant spike in volumes for travel back into China between 12-Mar-2020 and 18-Mar-2020, a trend that was evident from across many countries, but spread over varied dates during that week-long period.

Chinese officials believe that the virus has mostly run its course domestically, but they are now becoming more vigilant with imported cases as citizens return to China.

Almost all COVID-19 cases being reported in China are now from people returning to the country.

Following China’s downward trajectory in the early stages, the lifting of restrictions domestically could have marked a return to stability.

Travel request volumes into China had shown some positive signs during the first weeks of Mar-2020, up significantly on the month before it.

But all countries are now wary of returning citizens

However, despite a strong stepped increase from 09-Mar-2020 through 16-Mar-2020, China’s own travel restrictions on inbound arrivals  (14 days quarantining) have now resulted in 'desire to travel' levels falling lower than those even experienced after the initial Wuhan lockdown, when there was no quarantining requirement.

As we enter 2Q 2020 there are some grounds for optimism. Domestic travel in China is gradually returning, as capacity is steadily restored.