Canadian airlines are joining operators worldwide in facing the reality ushered in by the COVID-19 pandemic – it could take up to five years for demand to return to 2019 levels.

The country’s largest operator – Air Canada – does not expect to return to 2019 levels of revenue and capacity for at least three years, which has forced the airline to make tough decisions regarding its workforce, and has resulted in the streamlining of its fleet.

Most airlines are opting to accelerate the retirement of older aircraft as they work to rightsize their operation to accommodate significantly diminished demand.

Canada’s government has been slow to offer financial assistance to its airlines, but it appears that the country’s larger airlines could possibly benefit from an aid package that is in development to assist larger companies, which has created concern among some of the country’s smaller airlines that they will be left to fend for themselves.

No aviation market has been spared from the devastating effects of the COVID-19 pandemic. Canada’s capacity has fallen to near zero as demand quickly diminished.

The country’s system ASKs for the week of 25-May-2020 have fallen approximately 92% year-on-year. 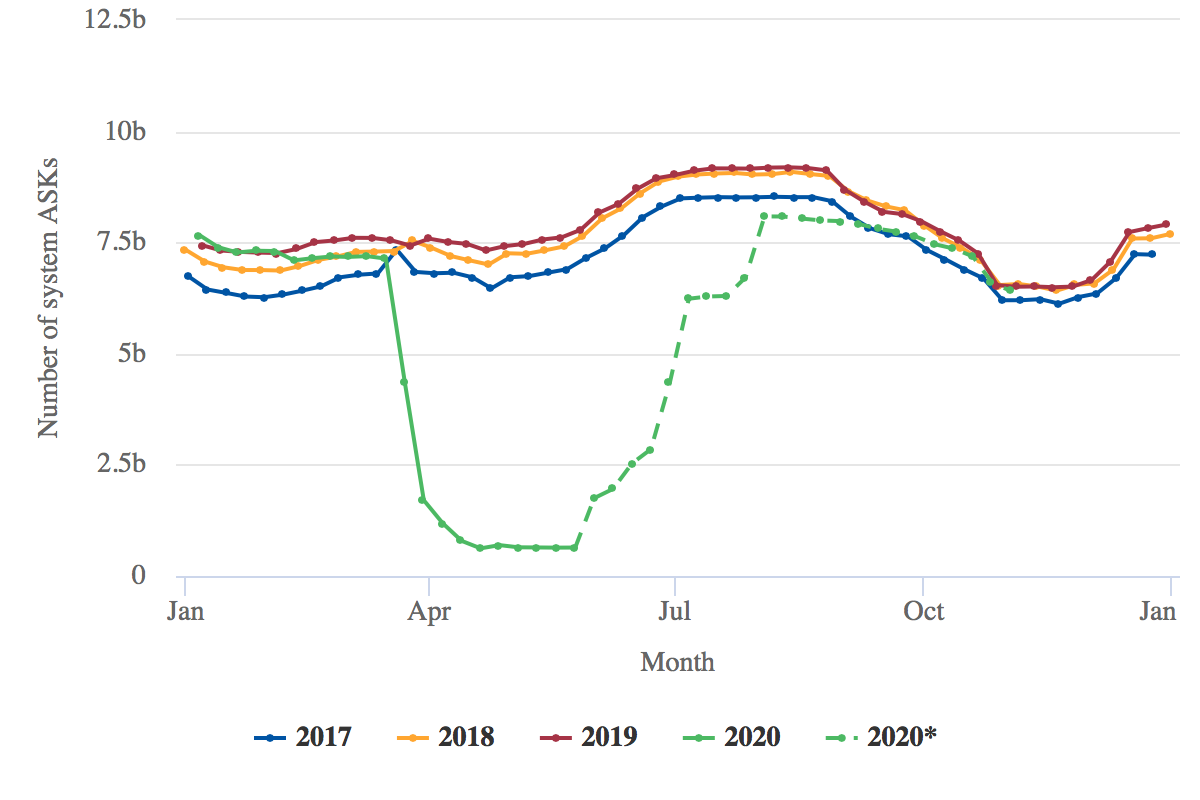 * These values are at least partly predictive up to 6 months from 25-May-2020 and may be subject to change.

Air Canada has joined other large global operators in painting a bleak picture for the foreseeable future. The airline is projecting a three-year period for its revenue and capacity to return to 2019 levels. It has been forced to lay off approximately 60% of its workforce in Jun-2020.

Air Canada has slashed its capacity for 2Q2020 by 85% to 90%, and has 207 inactive aircraft. The airline is in the process of retiring 79 aircraft, including its Embraer 190s, Airbus A319s, and the Boeing 767 widebodies that are largely operated by its low cost subsidiary Rouge.

Air Canada fleet summary: as of late May-2020

The airline has 89 unencumbered aircraft, said Air Canada CFO Michael Rousseau during a recent discussion with analysts and investors. He explained that between 40 and 50 of those aircraft are pledged to financing existing financing agreements.

Rouge’s long haul network is mostly made up of flights to secondary markets, and Mr Rousseau remarked that Air Canada can move that traffic through a stop in its hubs while also removing complexity from its fleet.

Previously, Mr Rousseau has said that although Rouge will be an integral part of Air Canada, the operator will be primarily a narrowbody operator in leisure markets.

Air Canada has recently experienced some uptick in demand and fewer ticket cancellations, said Mr Rousseau. He remarked that the airline was expecting that some domestic leisure traffic would return for the 2020 summer high season, and business traffic could start to grow in autumn 2020.

Flair Airlines, a small Canadian ULCC, has also recently said that it is expecting some improvement in travel demand by Jun-2020. The company’s CEO Jim Scott, via Flair’s YouTube account, said that by Jul-2020 or Aug-2020 Flair would have enough capacity to “run a scaled down, but certainly a coast to coast market”.

Data from CAPA and OAG show that as of late May-2020, Flair is operating flights to four airports – Edmonton, Toronto, Vancouver and Calgary.

Mr Scott also remarked that Flair’s bookings (as of late May-2020) were broadly 15% of the levels the airline posted a year ago.

Canada's approach to offering assistance to airlines is hard to decipher

The Canadian government has helped airlines through a federal wage subsidy programme, but has been slow to offer operators more comprehensive financial support.

Now the country’s government has created a loan package for companies with annual revenues of CAD300 million or more and requires those firms to seek financing of at least CAD60 million.

Companies applying for the aid would be subject to strict limits on dividends, share buy-backs and executive pay – which are essentially the standard stipulations for corporations seeking government aid in the wake of the rapid spread of COVID-19.

Mr Rousseau stated that the details of the package developed by Canada’s government are not yet available, and at this point is not certain that Air Canada or Canada’s second largest airline, WestJet, will decide to make use of the government’s support package.

WestJet is now private, after being acquired by Onex in 2019, and Air Canada had a reasonably solid balance sheet before the crisis. As of 31-Mar-2020, Air Canada’s unrestricted liquidity was CAD6.5 billion, and the airline had approximately CAD2.6 billion in unencumbered assets (excluding the values of its Aeroplan loyalty programme and Air Canada vacations).

For now, it appears that smaller airlines in Canada could be left to their own devices to find financing to weather the crisis.

Mr Scott of Flair advised that the airline had lost 95% of its revenue in 10 days. He was quoted in globalnews.ca, where he declared that Flair needed a “federal airline support package that does not select winners and losers but demonstrates a commitment to a diversified and competitive airline industry accessible to all Canadians”.

Although the Canadian aviation market is largely a duopoly between Air Canada and WestJet, there are other airlines that no doubt are working to create a financial war chest for surviving the crisis.

Porter Airlines, which has a niche turboprop operation at Toronto City Billy Bishop airport, has reportedly secured CAD135 million in financing from Export Development Canada (EDC), and Flair is also looking to secure an EDC loan, according to the Financial Post.

Perhaps that financing could be enough to keep those airlines afloat, and the government may have decided that is the best avenue for smaller airlines.

The response by governments worldwide to assisting airlines with financial aid is varied. Canada appears to have created a scheme that is, in some aspects, similar to the package the US government has offered to airlines.

Some US airlines are weighing whether they will make use of the loans offered by the government, and now their counterparts in Canada are starting the process of making similar assessments.