Coronavirus: China offers to pay airlines to return to the air. UPDATE

In a bid to restore much needed connectivity with the rest of the world, China's CAAC has announced a series of support measures to encourage airlines to recommence air services.

These include direct payments per ASK for airlines prepared to operate directly to foreign markets.

The impact of the coronavirus COVID-19 has had a drastic impact on air services, not only in and from China, but also among its near neighbours and across Asia.

The financial damage to airlines (and the aviation supply chain) is already approaching annualised double digit negatives, endangering some and setting back growth generally.

On 4-Mar-2020 the CAAC announced a series of financial measures to help the aviation industry navigate the impact of the coronavirus outbreak.

This included offering direct subsidy to Chinese - and foreign - airlines to resume non-stop international services that had been suspended.

The purpose is to support airlines to "fight the epidemic and provide financial support for domestic and foreign airlines".
The focus is on direct services, meaning that the subsidies do not apply to services from Hong Kong, Macau or Taiwan.

Much of China's air traffic has been carried on foreign airlines over their home bases ("sixth freedom"), but as China's home grown airlines proliferated, direct services have expanded rapidly. 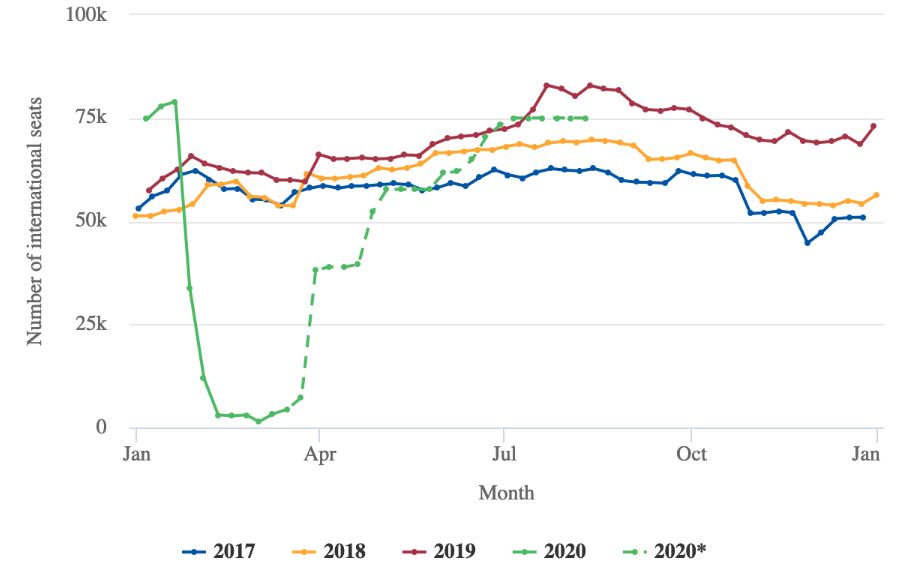 Even a major hub like Guangzhou in the industrial south is operating at only around 20% of pre-virus levels. 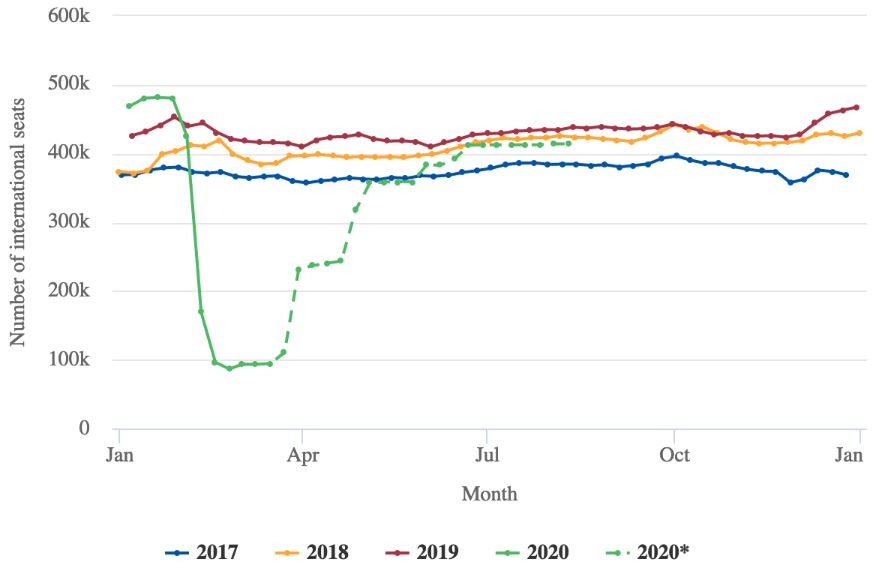 Despite the drastic tumble, China Southern Airlines' share price has been resilient, presumably assisted by government measures to tide the airlines through this difficult time.

It is a similar story with the other big two partially government owned airlines, China Eastern and Air China. Meanwhile, China's largest LCC, Spring Airlines's share price is also only down a relatively small 10%; troubled HNA Group's Hainan Airlines, having lost much of its value as its parent sold down assets to reduce its debt, has remained quite stable as moves to restructure are under way.

The CAAC's encouragement is having some effect, as foreign carriers withdraw

The CAAC also breaks down the key international markets by capacity. It is not only passenger demand that influences the week-on-week changes, but also to some extent foreign national rules and requirements on air travel to and from China.

The figures also show vividly how fast circumstances are changing, as other countries fall victim to the virus. Whereas in the previous week, Korea capacity increased, it fell 14% the following week (and will fall again when the w/b 9-Mar-2020 numbers are published).

Japan too and Singapore were steeply down w/b 2-Mar-2020 and France, after being up 28% the previous week, lost almost all of that gain, as airlines withdrew direct services. Most country markets have declined - a key exception being Cambodia, a fact that has raised eyebrows among some observers.

The government will be hoping to see positive results from its financial incentives in the next few weeks.

The CAAC has released capacity data for the coming week. The biggest changes have been Japan - down another 21%, following the 31% reduction the previous week; South Korea - down 24%; even Cambodia, which had been growing strongly, is down 13%. 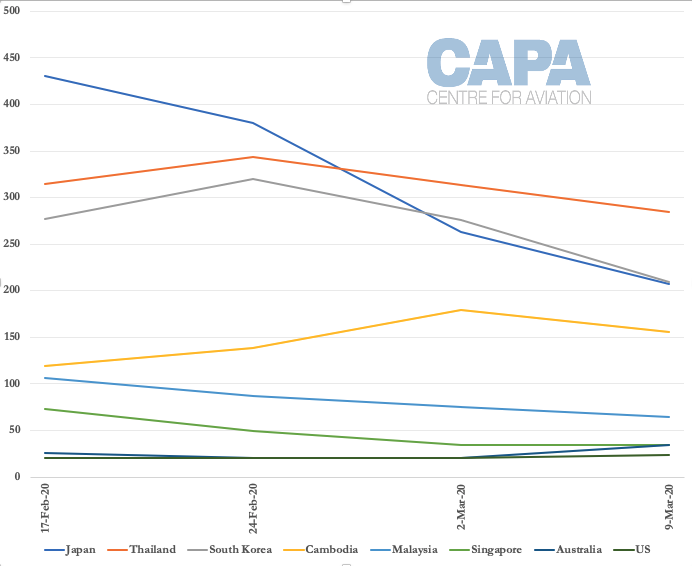 While the focus is on passenger traffic, freight congestion is a vital challenge

According to the Wall Street Journal, westbound containership operators have cancelled up to 60 trans Pacific sailings to Los Angeles and Long Beach in 1Q2020, and 110 to North America - more than half the normal total - as Chinese factory shutdowns slowed export production.

The result is that fewer ships are available to make the return journey east, and disruption of the normal turnover of containers. Major exporters like California's orange producers are scrambling to find space to export in their peak season.

One mode's misfortune can be another's opportunity. Much of the sea trade is in perishables, as fast ships have over the years displaced the need for higher priced carriage by air. So it might just be that, aside from a passenger subsidy, some of the new air services will be able to find a lucrative trade - assuming that consumption in north Asia returns.

This is one reason that freighter frequencies to and from China have shown greater resilience than passenger services.

Restoring services is one thing; rebuilding demand is another

Despite the keenness to restore air services, demand will not necessarily follow as rapidly, even if stimulated by extra-low fares.

Many of the current and planned flights will be continue to operate well below economic load factors and even the government stimulus is unlikely to do more than deaden some of the pain, rather than producing viable operations.

The extent and variety of the coronavirus impact is becoming so widespread that even if China can show normality is returning, the general aura of concern will prolong the time before traveller confidence is restored.

CAPA MEMBERS - Stay up to date with the latest critical global developments affecting the industry with our customisable CAPA Alerts. Please contact our Sales Team for assistance.
MEDIA – If you are seeking further commentary on this topic, please contact our Marketing Team.