Another day, another airport group reporting a big downturn in revenue in 1Q2020 because of just two weeks of inactivity at the end of March.

The Copenhagen Airports group says it is well prepared financially for the coming period and is making use of the Danish government’s financial support packages. The group reports similar measures to those undertaken by individual airports and groups to prepare for succeeding quarters this year, but in this instance is quick to point out that it has not ditched its ‘sustainable aviation’ policy for the future.

Quite how that will work out, when aviation as a whole will be barely ‘sustainable’, remains unknown.

Summary of the first three months of 2020

CPH Airports (CPH) reports that the pandemic and its societal and economic consequences have evolved into a global economic crisis that has dramatically impacted the aviation industry.

Before the pandemic, some 83,000 travellers passed through Copenhagen Airport on a daily basis. Today, that number is less than 900.

The aviation crisis has had a severe impact on Denmark, as the country relies on international connectivity, tourism and trade with the rest of the world. 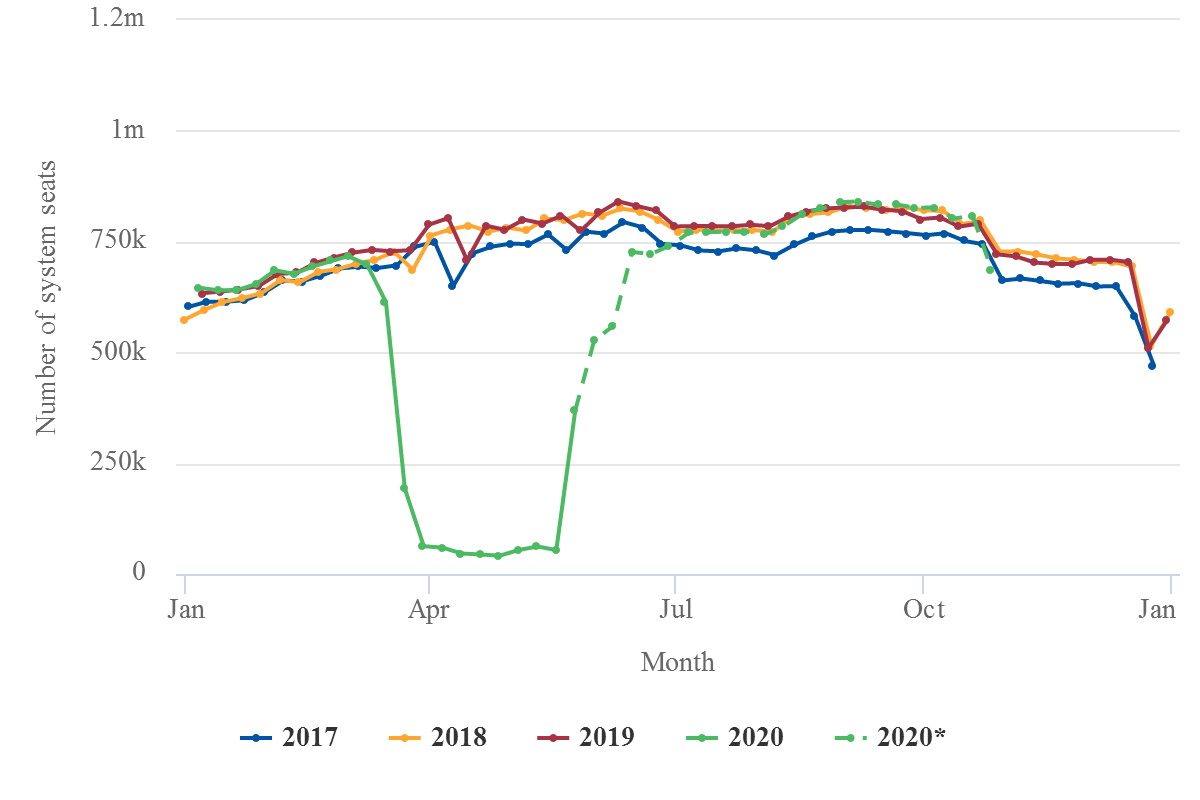 The standstill in Mar-2020 was so abrupt that CPH is reporting historically poor quarterly results, despite nearly normal operations in January and February.

With virtually no air traffic during the months of April and May and the extensive uncertainty as to when “the world will reopen”, CPH is unable to provide guidance for the near future, but it is certain that 2020 will be a challenging and difficult year for the aviation industry.

CPH is currently rolling out a comprehensive plan intended to preserve cash by reducing operating costs and postponing investments otherwise planned for the rest of 2020 for up to DKK1.0 billion, and to identify possible cuts and consequences for 2021.

Being categorised as critical infrastructure, the airport has an obligation to remain in operation, even if that implies large daily operating losses. To address that situation, CPH has established substantial credit facilities to ensure that CPH remains in operation during the forthcoming period.

In addition, CPH is making use of the Danish government’s financial support packages.

Instead, 2,200 of its 2,600 employees have been temporarily furloughed in a rotation scheme. Fulfilling the ambition of avoiding redundancies will depend on the depth and duration of the crisis, as well as on the support measures provided by the government.

It is a condition that CPH has no capital outflow, including dividends, or share buyback, in the financial year 2020 and 2021, in order to receive compensation of more than DKK60 million for fixed costs.

In terms of liquidity, CPH says it is well prepared for the coming period. In May 2020, CPH entered a 2-year facilities agreement totalling DKK6.0 billion with a syndicate of banks. The new facility is a combination of a 2-year term loan of DKK2.0 billion and a 2-year credit facility of DKK4.0 billion.

Simultaneously, CPH entered into waiver agreements with existing lenders, providing CPH relief from certain loan covenants until and including Q12021. The new facility and the waiver agreements ensure that CPH will continue to be able to meet its financial and investment commitments.

Copenhagen Airport is home to some 1,000 companies and airlines that combined employ approximately 22,000 people, within areas spanning from handling aircraft, baggage and passengers to catering, as well as construction, maintenance and retail and restaurant services. Many of these businesses have had to dismiss staff.

Most recently, SAS has announced redundancies of up to 1,700 employees in Denmark, and on 20-Apr-2020 the airline Norwegian announced that it was making redundant more than 600 Danish pilots and cabin crew.

Over the years, CPH has worked closely with both SAS and Norwegian on route development. Before the crisis hit, the two airlines accounted for 51% of traffic at Copenhagen Airport.

According to data from Copenhagen Economics, the aviation industry contributes jobs and wealth creation in Denmark worth as much as DKK100 billion, including DKK30 billion through Copenhagen Airport alone.

“Green transition is not forgotten”

Despite the crisis, Copenhagen Airport intends to continue seeking to work with its partners, the airlines, the public sector, NGOs and other parties to ensure that aviation of the future will be sustainable, and the entire Danish aviation industry will achieve climate neutrality by 2050.

CPH also intends, until further notice, to continue the climate strategy for Copenhagen Airport and to aim for the targets of making its operations carbon-neutral and completely emissions-free by 2030.

However, the pace in the crucial green transition will depend on how aviation gets through the crisis. The more economic muscles CPH has, the greater strength CPH can put into the sustainable transition of aviation once the world reopens for trade, travel and air traffic.

Net financing costs increased by DKK2.3 million compared to the same period of 2019.

Investments in the first quarter included the expansion of Terminal 3, the completion of Pier E, construction of a multi-storey car park, new baggage facilities and IT systems, as well as miscellaneous improvement and maintenance work. All investments are now under review as noted above.

Global aviation is under significant pressure from – among other factors – economic uncertainty, climate change and the recent coronavirus outbreak (COVID-19).

The coronavirus outbreak and its social and economic consequences have significantly reduced the number of flights – in terms of both holiday and business travel. Airlines have announced cancellations and have cut back on operations in line with declining demand.

Due to the extensive uncertainty the COVID-19 outbreak has caused for air travel in Denmark and the rest of the world, and the ongoing uncertainty about the duration of the situation, it is currently not possible to provide a reasonable assessment of the financial impact caused by the coronavirus.

Hence, it is not possible to provide guidance on revenue, profit before tax or total investments. CPH will publish expectations for 2020 and other material new information when sufficient clarity becomes available.

The above is unchanged from the guidance provided in the publication of CPH's 2019 Annual Report on 03-Mar-2020.