The majority of North and South American carriers' shares were up on Thursday (11-Feb-2010), moving with the wider market. The Dow (+1.1%) was up after the US Labor Department stated first-time jobless claims fell to their lowest point since Jul-2009, indicating that the labor market is improving. Stocks were also pushed higher by news the European Council pledged its support to Greece over its sovereign debt issues, and a rise in energy and materials stocks.

Copa up on analyst upgrade

Copa Airlines (+8.5%) gained after Credit Suisse upgraded its share rating for the carrier from ‘Neutral’ to ‘Outperform’ and its price target from USD48 to USD62. The analysts cited Copa’s strong results for 4Q2009 and improved outlook for FY2010. Copa reported earnings per share of USD1.61 for FY2009, compared to USD0.59 in FY2008.

Air Canada (+10.9%) shares also continued to rise following the release of better than expected 4Q2009 results for the carrier the day prior.

United Airlines CEO, Glenn Tilton called on governments to continue industry liberalisation and cease creating a "protectionist environment", warning that unless governments do so "our [industry's] future is not likely to be materially different from our past."

Mr Tilton stated the airline industry is “indeed a global industry", adding "we bring the world closer together, yet we are constrained by anachronistic restrictions that preclude us from using business tools and options available to virtually every other industry for cross border ventures, investment, business alliances, mergers and acquisitions...We are a global industry that powers the global economy. It is time that government enables our ability to function as such, rather than inhibit us. Treat us like any other global business, and our customers, our employees, our investors, the cities and economies we serve, and ultimately governments will all benefit".

More on Mr Tilton’s speech can be found in today’s America Airline Daily, your one-stop shop for news, data and analysis from the dynamic North American, Caribbean and Latin American aviation markets.

Also during trading, OAG releases its capacity report for Feb-2010. According to OAG, the only region to report a decline in traffic was North America, where frequency and capacity levels have reduced by 1% and 2% year-on-year, respectively. However, frequency and capacity to/from the region have shown a positive growth of 3% and 2%. The total number of flights that will operate to/from North America is 78,059 and the total seat offering is 15.0 million.

Latin America continues to expand its air services within the region, with 185,970 flights scheduled for Feb-2010 - an increase of 12% (19,891 more flights). Capacity is also up 15%, with 2.56 million seats on offer. Operations to/from Central and South America reflect an increase of 6% in frequency and 5% in capacity year-on-year. 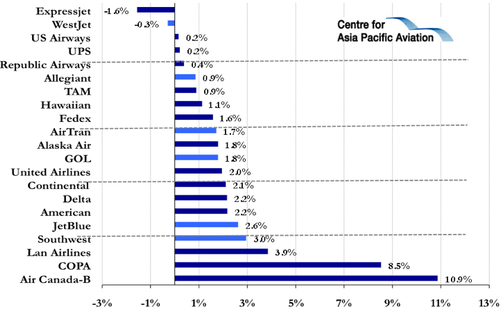