Pressure from having to pull capacity from Venezuela and overall economic weakness in many regions within Latin America pressured Copa Airlines’ financial results for 2014; but the airline still delivered a respectable 19.8% operating margin for the year and posted a decrease in unit costs.

Many of the elements that dragged down Copa’s financial results in CY2014 remain intact – continued pressure on yields by moving a significant amount of capacity from Venezuela and weakened economies in Latin America. The airline has not made any adjustments to its projected 7% capacity growth for CY2015, but its expansion of supply is at a lower rate than 2014, and most of the growth stems from network changes Copa undertook in CY2014.

Although Copa’s yield and unit revenue challenges will persist in the near future, overall the company remains in good financial shape to withstand the macroeconomic pressures weakening its results. 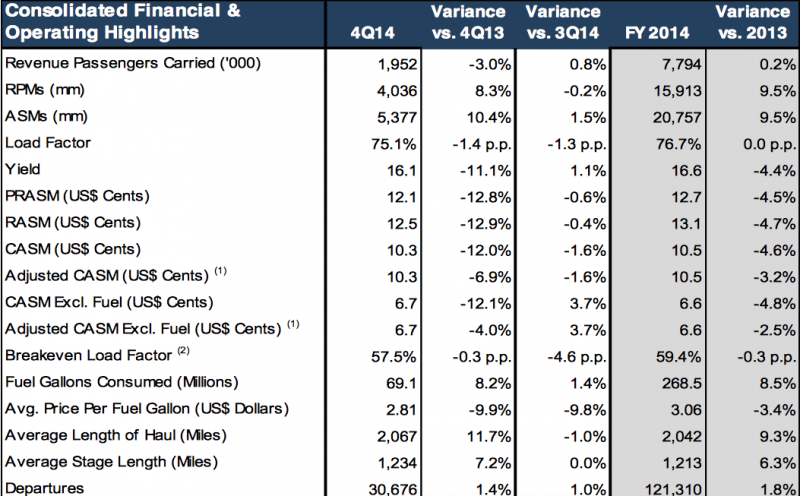 Copa’s yields decreased 11% and 4%, respectively, in 4Q2014 and CY2014, some of which was driven by an increased length of haul. But the main driver of the decline in yields and unit revenues was capacity reductions by Copa on routes to Venezuela initiated in mid-2014 to combat the effects of Venezuela’s weak currency and monies held by the Venezuelan government for repatriation.

Copa began cutting its seats on offer to Venezuela in May-2014 and by YE2014 had reduced its seats available by roughly 50%.

Data from CAPA and OAG show that for the week of 9-Feb-2015 to 15-Feb-2015 Venezuela is Copa’s 11th largest international market measured by seat deployment, and does not feature in the airline’s top countries by deployed ASMs. 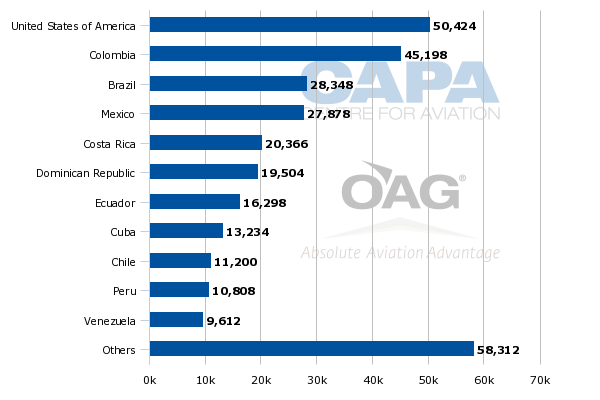 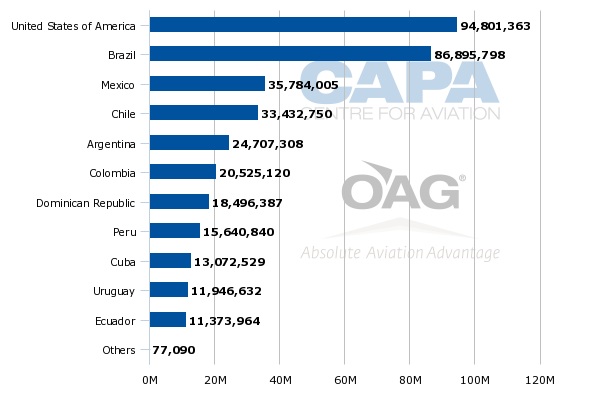 Copa estimates that Venezuela represented about 9% of its revenues in 4Q2014, and that level has fallen to 6% in the beginning of 2015. The company has been essentially targeting point of sale outside Venezuela.

Despite the cutbacks, Copa still represents approximately 4.5% of both Venezuela’s seats and ASMs for the week of 9-Feb-2015 to 15-Feb-2015. Offering some perspective on Copa’s operations to Venezuela, company CEO Pedro Heilbron recently told analysts and investors, “we reduced capacity. We shifted sales to US dollar fares.

However, our flights have very good load factors, which allow us to do an effective revenue management job”. He added the profitability of those flights, “still tops for us, obviously a lot less than what it used to be”. 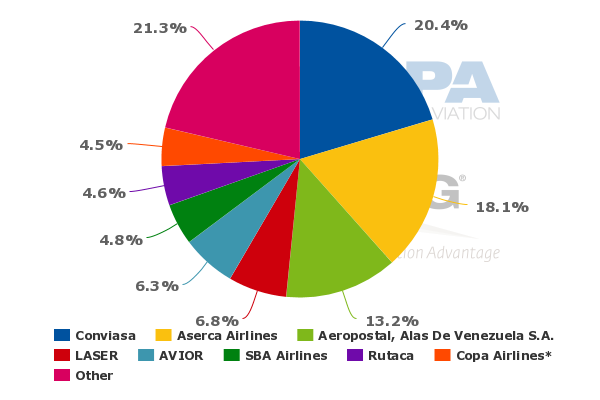 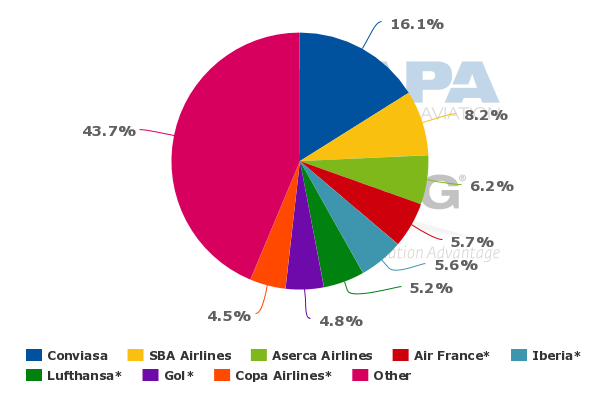 Panama is Venezuela’s second largest destination country measured by both seat deployment and frequencies, and Copa stresses that a viable market remains between the two countries. “There’s a strong Venezuelan community living in Panama,” said Mr Heilbron. “And there’s a lot of people going back and forth. So that remains a very healthy business, even thought we have less capacity. 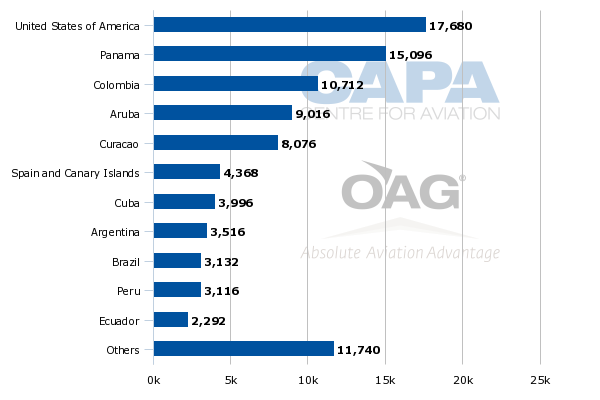 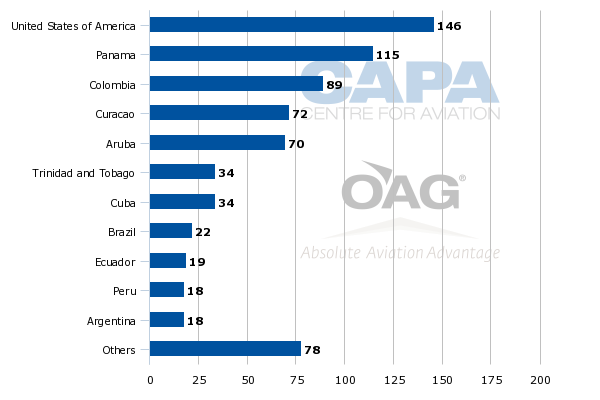 Copa faced weakness in other markets during 2014 including Argentina and Brazil, each of which have their own economic challenges - and that pressure is continuing into 2015. Mr Heilbron stated in 1Q2105 Copa’s load factors are trending flat to slightly up, but at the expense of lower yields.

Aside from Venezuela, Copa’s yields are being affected by the general economic outlook for Latin America, said Mr Heilbron. “This has led us to reduce our expectations for unit revenues for the year. Economic prospects for the region remain weak compared to prior years.”

As Copa begins to lap some of the changes it made to its Venezuelan operations in mid-2014, the airline could see some unit revenue improvement. Mr Heilbron stated that while Copa does not offer specific yield guidance, “I can tell you, directionally, is that our 2015 unit revenue or RASM guidance, we are expecting a slightly better second half of the year.”

The airline is also studying options to bring its net fleet growth to zero to two shells for CY2015. Originally, Copa was scheduled to receive eight Boeing 737-800s in CY2015 and three -800s through operating leases. It aimed to return five Boeing narrowbodies with expiring leases for net growth of six aircraft. The CAPA Fleet Database shows that as of 14-Feb-2015 Copa operates 15 737-700s, 53 -800s and 12 Embraer 190s flown by Copa Colombia. Taking the net aircraft additions down to zero to two does not affect Copa’s CY2015 capacity projections.

Copa is making all the right moves, but still faces tough conditions in 2015

Copa will continue to face some lingering challenges from pulling capacity from Venezuela at least through 1H2015. But the airline will continue to leverage its hub at Panama City Tocumen Airport as a prime connection point, and likely focus on markets outside of Latin America, evidenced by its planned new service to New Orleans beginning in Jun-2015 after introducing new service in CY2014 to Montreal and Fort Lauderdale.

The carrier is making the right moves by adjusting its fleet and attempting to keep loads high so it can quickly recapture unit revenues when conditions improve; but with tepid economic growth forecast for Latin America in CY2015, Copa could find itself facing continued pressure on yields for the foreseeable future.