The company cited the rolling winter storms which cost it net USD15 million - down from the USD25 million in lost revenue initially seen on the closure of its hub at Newark. It also cited the weak economy for its results as Continental's Chair, President and CEO Jeff Smisek expressed disappointment. "I'm disappointed with our first quarter results,” he said. “However, the year-over-year increase in our revenue reflects the slowly improving global economy and benefits from our membership in Star Alliance." 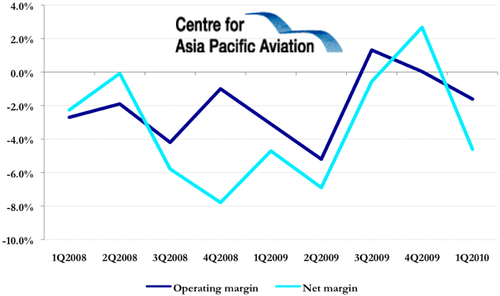 No matter how the question was asked, Smisek and his team refused to be lured into any conversation about consolidation, tossing off the issue with a simple statement, much to the disappointment of analysts on yesterday’s first quarter conference call.

“As you would expect of any responsible management team, we are examining all of Continental’s options and will take whatever action we believe to be in the best interest of our coworkers, stockholders, customers and the communities we serve,” he said foreclosing further questions.

Baggage revenue up, baggage carriage down

Smisek preferred to talk, instead, about the company’s efforts to increase revenues. He pointed to the fact that its baggage fees, expected to reach USD350 million this year, had the additional benefit of easing operations as passengers changed behavior, thus reducing costs. He reported that fees for customers subject to bag fees have reduced baggage by 17% for domestic first bags, with a 66% drop in domestic second bags. The company experienced a 52% drop in second bags on its Latin American routes and a 38% drop in second bags on its Trans-Atlantic routes.

During the quarter, Continental began offering customers the option of purchasing premium seat assignments for economy-class seats with extra legroom. The new product is clearly valued by passengers, said Smisek, adding that the fees were generating USD100,000 per day. “And that is revenue we’ve never collected before,” he said. Its recent decision to offer healthier and higher-quality food for purchase is expected to save USD35 million, assuming it breaks even on food sales.

Executive Vice President and CMO Jim Compton reported that the airline outperformed its peers, saying passenger RASM on a length of haul-adjusted basis was better. “While it is not unusual for us to run a RASM premium, for the last six month we have outperformed on average, of the ATA reporting carriers, by six to 10 basis points,” he said. “For the first quarter we outperformed by 8.6 points. In each of the first quarter months we’ve seen sequential improvements in RASM percent changes resulting in the fact that mainline RASM was up 5.4% on strong load factors while mainline yields remained flat year on year.” 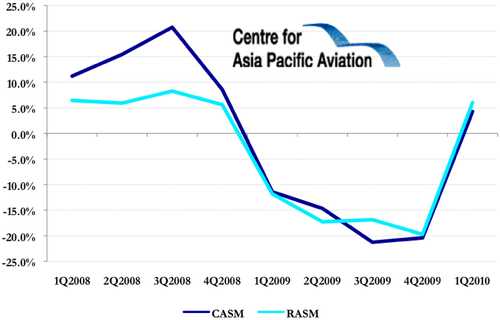 He added that regional RASM was also up – by 16.7% – on strong yields which were up 10% and load factor which was up 4.3 points. This was especially significant since it was in regional yield that the company first saw the beginnings of last year’s crisis.

Compton cautioned that it was still early in the recovery but the company was encouraged by the improvement in leisure yields in the first quarter, adding it bodes well for the summer. Still, the improvement was modest with high-yield traffic up year on year but still below the levels reached in 1Q2008.

International markets were showing sequential improvements. In both the Trans-Atlantic and Trans-Pacific markets, year on year business first RASM was up through the quarter on top of load factor and yield improvements. However, he added that the comparables were very easy. For year on two, he said both Trans-Atlantic and Trans-Pacific business first load factor was up several points but yields were still negative in comparison to 1Q2008.

Compton also discussed the impact of the Star Alliance, noting that it was startling considering they were still in the beginning stages of spooling it up. “The revenue growth related to our membership in Star Alliance is exceeding our expectations," said Compton. “The revenue results year on year in the first quarter showed total passenger revenue up 7.1%, while total partner revenue was up 39%. The results versus the first quarter of 2008 are encouraging as well. On a year-on-two basis, first quarter total passenger revenue was down 13%, but total partner revenues were up slightly.”

He attributed the results to the fact that Star is the largest, most comprehensive alliance, which offers more options to customers. “It is also the oldest and most sophisticated,” he said. “The partnership is with carriers that have a fantastic focus on customer service.”

Echoing the other carriers who have already reported, Compton said that for the second quarter corporate revenues were positive. “We are seeing a pick up inside of 14 days so we are managing to a more normal booking pattern,” he said. “In the first quarter it was up 20% year on year but down 17% from first quarter 2008.”

He reported that, because of the volcanic disruption, Continental was forced to cancel 400 flights accounting for 300 million ASMs for an estimated negative impact on passenger revenue of USD24 million. “There is still a week left in April, but based on the data, and including the impact from the volcano, we expect consolidation April RASM to be up 14% year on year and mainline to be up 12% year on year.

Regional revenues were up 14.8% to USD481 million on a 1.6% decline in ASMs. RASM increased 16.7% and yield jumped 10%. Consolidated revenues rose 7.1% to 2.8 billion on flat ASMs, a RASM increase of 7.1% and a yield increase of 1.3%. The regional fleet declined in the quarter by seven CRJ-200s and four Embraer 145s. By the end of June another four aircraft will leave the regional fleet.

Continental's employees earned a total of USD2 million in cash incentives for on-time performance during the quarter.

Cost side up, mostly fuel

The company expects, over the next six weeks, that advanced booked seat factor versus the year-ago will be down 1-2 points for mainline domestic while mainline Latin America is expected to be down 2-3 points. Transatlantic will be flat to up one point while Pacific will be up 4-5 points and regional down 1-2 points.

For the second quarter, the company expects both its consolidated and mainline load factors to be up about one point year on year.

At the end of the second quarter, Continental expects unrestricted cash, cash equivalents and short-term investments balance of between USD3.0 and USD3.1 billion.