US carriers had a tough day on Wall Street yesterday, as investors shrugged off lower oil prices to focus on traffic reports, which were generally below expectations.

American Airlines eased 1.9%, despite announcing a frequent flyer link-up with Gol (see below), that aims to evolve into a codeshare deal that could provide significantly improved connectivity for American in Brazil. Gol’s shares advanced 3.7%. 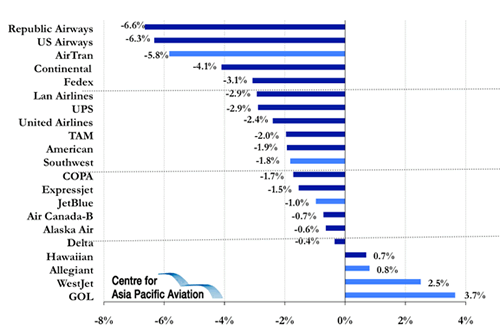 GOL has entered into a reciprocal frequent flyer agreement with American Airlines, which will allow members of each frequent flyer program to earn and redeem miles on each other's airline and lays the groundwork for a future codeshare agreement.