Continental can join Star Alliance: DoT. Global alliances and the demise of the US airline industry

On Friday, 10 Jul-09, the US Department of Transportation issued a ruling granting antitrust immunity for Continental Airlines’ membership of the Star Alliance (Docket number OST-2008-0234). Unlike the negative approach of the Department of Justice in its submissions on the proposal, the DoT considered that “The venture, as well as the broader alliance, will create substantial new service options and fare benefits for consumers.” The effect is to allow all carriers under the antitrust umbrella to coordinate prices and schedules.

While it may seem a mere administrative decision in a turbulent world, the decision takes on much greater importance, as the first pointer of policy directions under the Obama administration. Many aviation authorities around the world will breathe a sigh of relief at this decision, because momentum had appeared to be growing for US policy to u-turn and withdraw into some good old fashioned protectionism.

Continental will now be able to cooperate as a full member of the Star Alliance, along with the other North Atlantic members, Air Canada, Austrian Airlines, bmi, LOT Polish Airlines, Lufthansa, SAS, Swiss, TAP Portugal, and United Airlines (there are some minor exclusions – see below).

The powerful DoJ had previously found considerable anti-competitive elements in the proposed agreement and recommended that limits be imposed on the degree to which the carrier could benefit from immunity. But the final decision, backed by the Administration, lies with the DoT.

There is one very important point the Department of Justice overlooked in reaching its conclusion on Continental Airlines’ membership: the US is a rapidly diminishing force in global aviation. (This omission of scope is partly due to the more narrow terms of reference that the DoJ must follow, but the Department has always tended to be more precious about any perception of reduced competition at the ground level, regardless of the upside.)

Participation in global alliances is perhaps in reality the last hope US carriers have to re-establish their position, or at least to retain a substantial role in world markets in the future.

As other airlines in Asia and the Middle East rapidly expand, US airlines are being left behind. The days have gone when they dominated global routes. And – contrary to the often retrogressive views of would-be protectionists - this is not because foreign airlines have plundered the US market.

It is simply because the US airlines, bedded deeply in and preoccupied with inward looking competition in the domestic market, are so cash starved that they have become unable to acquire the aircraft necessary to make them serious competitors on long haul international routes. At the same time their domestic-driven service levels have fallen well behind the new benchmarks being set by the new airlines.

The major US airlines, most of which have been through Chapter 11 bankruptcy in recent years with the inevitable downsizing that goes with it, are challenged in their large domestic market. Their fleets are among the oldest in the world and their financial position does not permit them to be locking into large aircraft orders at present.

Thus, while their aggregated order books look reasonable in world terms, for the purposes of replenishment and renewal, the international long haul picture looks quite different. North American airlines feature actively in total orders, with 2,707 on order – but most of these are single aisle aircraft, destined for the domestic market. 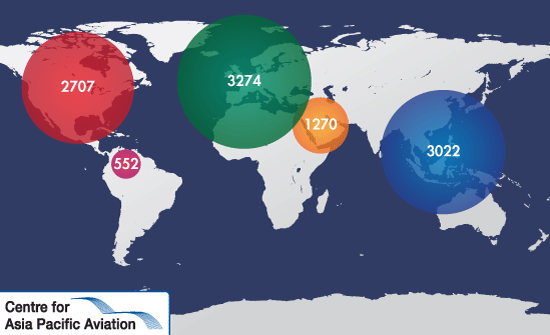 When the single aisle aircraft orders are removed from this picture and solely twin-aisle aircraft orders are shown, it becomes clear that the American carriers’ international glory days are behind them. Middle East and Asian airlines dominate in aircraft designed for the major international routes. Against 1,372 widebody aircraft on order by Asian and Middle East carriers, North American airlines have only 380 on order – less than a quarter of that total. 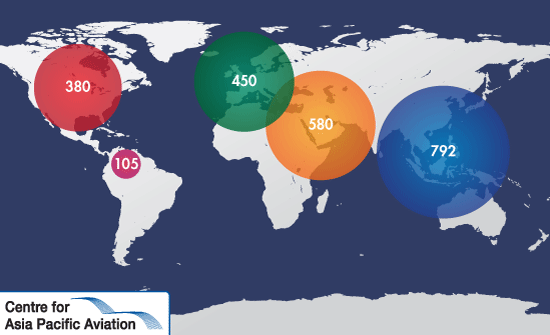 The DoJ had generally deemed the arrangement as being anti-competitive. In its objections, Justice recommended that  “the immunity granted should be more narrowly tailored to minimize anticompetitive effects.”

But, said the DoT, “After careful consideration of DOJ’s and other parties’ arguments, we confirm our tentative decision that this application is not anti-competitive.  While DOJ has suggested that less anticompetitive measures are available and that immunity does not benefit consumers, we are not persuaded to alter our fundamental initial assessment of the Joint Applicants’ request.”

A positive indicator for the liberalisation outlook

So, as the US government considers a number of critical liberalisation measures – including whether to approve the oneworld immunity application of British Airways and American Airlines (and Iberia) and the preparations for the next round of open skies talks with the Europeans later this year, this decision comes as a welcome breath of fresh air. SkyTeam, too, will welcome the opportunity possibly to add further members to its existing immunity.

One of the concerns of the DoT, had the immunity not been granted, was of the confusing signs being sent to foreign governments: “Were we to suddenly change our antitrust immunity and public interest approach, as DOJ suggests, the credibility of the U.S. Government with its international aviation partners would be significantly compromised and our ability not only to reach new Open-Skies agreements but also to maintain those agreements that we have already achieved would be undermined.”

This clear expression of the importance of international comity will be most welcome, across Europe and throughout the world. It also augurs well for the brief that the US delegation may take to the European talks.

Recognising the special nature of the airline industry

Part of DoT’s rationale for the approval was in simple terms that alliances were the poor man’s merger in a heavily regulated world.  Most governments impose aggressive limits on foreign ownership and some even prohibit entirely any investment at all by foreign airlines. And, even apart from that, the implications of being a “flag carrier” also raise intangible barriers to sensible cross border ownership.

According to DoT, the burden of regulation internationally is such that ownership restrictions “preclude truly integrated joint ventures or mergers, similar to those pursued in other industries.” And, as a consequence, antitrust immunity for this form of alliance was a necessary substitute.

Moreover – and this argument goes more to the inherent efficiency (or not) of the airline industry, airlines additionally “are governed by a system of air service agreements that often circumscribe their ability to serve an inherently global market as efficiently as possible”.

And the value of alliances

The DoT however found real supporting logic in favour of the role of the global alliances. For example, there is  “a broader array of choices within the alliance than could be offered without immunity.”

And the fact that there are now three major groupings adds an improved layer of competition, where each of them markets the capability of  “offering service ‘from anywhere to everywhere’” – something which is clearly beyond the scope of any single airline.

Meanwhile, the role of intermediate airlines in offering connecting service at competitive fares, where an alliance airline may offer non-stop, also serves to keep the alliance groupings honest (and vice versa). Even on nonstop services, says the DoT, alliances are precluded from monopoly pricing by the “coordinated connecting services offered by integrated alliances [and this] disciplines fares on nonstop routes.”

In this regard, DOT studies have found that one-third of all passengers travelling on routes with non-stop service still opt for a connection in lieu of the nonstop - indicating that consumers make choices based on multiple criteria and making the presence of nonstop service a less dominant consideration.

Some defined “carve-outs” are excluded

The approval did however contain some restriction and some of the carve-outs suggested by the DOJ have been specified. On transatlantic routes, the following sectors were exempted from immunity due to the fact that the routes currently have only Star Alliance carrier service. The DOT limited carve-outs to sectors operated exclusively by Star members.

Additionally, the existing carve outs (Chicago – Frankfurt and Washington – Frankfurt) were maintained. While change was denied at present, the DOT has removed such restrictions in the past and it is possible that they will be lifted in the future.

The DoT did not impose restrictions in cases where the immunity would simply reduce the number of total operators. The example of New York/Zurich was cited in that while Continental and Swiss have by far the largest share, both Delta and American (SkyTeam and oneworld respectively) operate the route as well, meaning all three alliances have skin in the game and the consumer is protected by a competitive environment.

There is also a provision for lifting the restrictions “should a new entrant enter a ‘carved-out’ market with nonstop service, with at least five roundtrips per week for nine consecutive months.” There is also provision for lifting restrictions in markets where joint ventures are operated, with the DOT seeing these “metal-neutral” operations as effectively a single carrier operation.

In addition to the transatlantic carve outs, there were similar restrictions placed on a handful of trans-border routes, as well as from any US city to Beijing, where currently only limited competition exists. This will also, presumably serve to add some pressure on continuing US-China talks, where China continues to be reluctant to liberalise. That said, the DoT’s reluctance to extend immunity for that market mostly results from the fact that “While both Delta and US Airways currently are authorized to serve Beijing nonstop from the United States, neither has chosen to enter the market yet, each having requested delays due to the global economic situation.”

Even though there were options to access the China market – such as through Hong Kong, where immunity was pointedly explicitly approved  - “In considering DOJ’s arguments about potential competition in certain markets in this case, however, the Department is modifying its tentative conclusions and imposing a carve out in the US-Beijing market, in the particular circumstances of this case, until additional competing service is introduced. The Department will place this limitation on immunity until a US carrier that does not have antitrust immunity with any applicant in this proceeding initiates nonstop service between a point in the US and Beijing, and sustains that service with a minimum of five weekly roundtrip flights for more than nine months, subject to the Department’s concurrence that these conditions have been met.”

This will also give the DoJ a scrap of comfort that its views are being accounted for.

Wait for the backwash…

At this stage there has been no reported reaction from powerful House of Representatives Committee Chairman, Rep Oberstar (or the labour unions who spearhead the reactionary forces), but they can be expected to be strident in their condemnation of the DoT decision.

But governments on both sides of the Atlantic are currently employed in analysing the various effects of global alliances on competition. There will be lots more on this subject in 2009, as the global airline industry undergoes a viable imitation of an industry in its death throes.

Fortunately the DoT – and the Obama administration – has on this occasion sent the correct message to its audience. This is no time to be rearranging the deckchairs.