North and South American airline stocks surged on Tuesday (05-Jan-2010), following reports of improved traffic by some US carriers, further encouraging investors who are hoping 2010 will bring improved airline performance as the economy recovers.

The AMEX Airline Index surged 5.2%, as all US carriers witnessed an improvement in stocks. The increase came despite another increase in oil prices (+0.3%), USD81.77, and a slip in the Dow (-0.1%), following reports of weak home and auto sales.

Continental Airlines (+13.7%) led the charge after reporting a 3.1 ppt year-on-year improvement in load factor for Dec-2009, as a result of a 6.0% increase in traffic (RPKs) and 2.1% increase in capacity (ASKs). Consolidated passenger revenue per ASM (RASM) is estimated to have decreased between 3.5% and 4.5% year-on-year, the smallest decline in 11 months, while Continental ended 4Q2009 with an unrestricted cash, cash equivalents and short-term investments balance of approximately USD2.85 billion - which was better than forecast. See related report: Continental Airlines’ yields, cash outlook and traffic levels improve in Dec-2009

The results by Continental and United also boosted all other US legacy carriers, including US Airways (+11.3%), American Airlines (8.3%) and Delta Air Lines (7.8%). Delta was also assisted by media reports Japan Airlines has selected Delta as its alliance partner over American Airlines.  American Airlines responded stating the reports were “inaccurate and misleading” and that it is still in talks with JAL.

In other news, Mesa Air Group commenced a financial restructuring through the voluntary filing of petitions to reorganise under Chapter 11 of the US Bankruptcy Code in the United States Bankruptcy Court for the Southern District of New York. During the restructuring, the Company will continue to operate as normal, without interruption, which includes its codeshare agreements with its partners US Airways, United Airlines and Delta Air Lines. Mesa’s go!-Mokulele joint venture, an independent Hawaiian inter-island operation, is not included in the filing and will continue to operate its full flight schedule. See related report: Mesa bankruptcy a long time coming 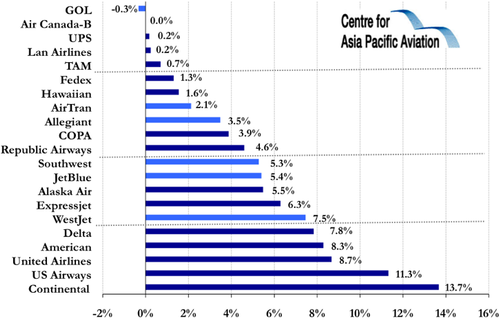