North and South American airline shares were mainly up on Thursday (30-Sep-2010), despite a slip in the US market. The Dow (-0.4%) fell on continued debt concerns in Europe, despite unemployment claims falling more than expected for Sep-2010.

More positively, Wall Street closed Sep-2010 as its strongest month since Apr-2009 and strongest September since 1939.

Continental Airlines (+1.3%) and United Airlines (+1.1%) shares are expected to stop trading on the New York Stock Exchange on 01-Oct-2010, with the carriers to instead trade under United Continental Holdings Inc (UAL), following the merger.

Following the combination, Delta Air Lines (+0.4%) will no longer be the world's largest airline. Delta, following its merger with Northwest Airlines, has been the largest carrier for the past two years. The carrier has launched a new advertising campaign in New York emphasising that Delta is “building a better airline, not just a bigger one”. A print ad in the campaign states: "It's easy to forget that size alone isn't enough to lead this industry."

Jazz Air (+4.3%) announced the completion of negotiations with Thomas Cook Canada for a flight services agreement, establishing the pricing for a five-year term ending 30-Apr-2015. In Apr-2010, Jazz signed a flight services agreement with Thomas Cook to operate services on its behalf during winter. In the initial season, Jazz will operate six B757-200 aircraft to various destinations in the Caribbean, Mexico and Central America from Toronto, Ottawa, Montreal and Halifax under the Thomas Cook Canada brand, subject to Jazz obtaining the required regulatory approvals. Service will commence on 05-Nov-2010 and will feature several product enhancements developed jointly by Jazz, Thomas Cook and its Sunquest Division.

Atlas Air Worldwide Holdings Inc (-7.4%) slumped on the day Boeing announced another delay to the B747-8 Freighter, pushing back first delivery from 1Q2011 to "mid-year 2011". Boeing is also taking steps to support the new schedule, including adding a fifth aircraft to the flight-test fleet.

Atlas Air stated it is disappointed but not surprised by Boeing's latest delay. The company may look at “remedies” from Boeing, although did not specify what form any compensation could take. 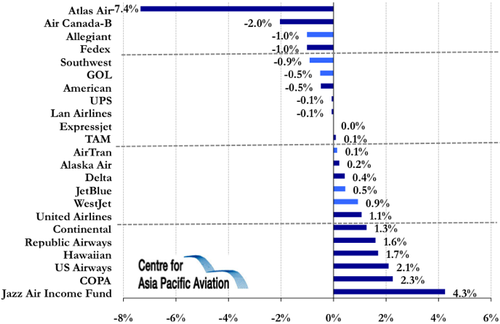